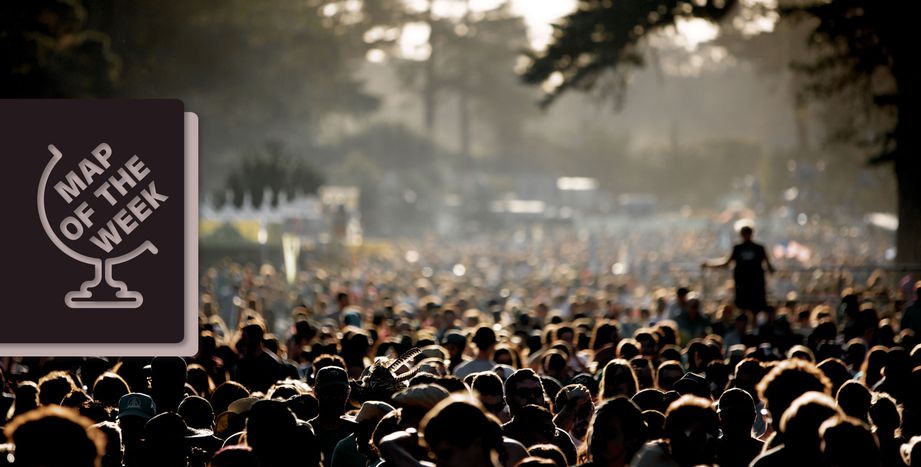 Map of the week: Europe overestimates the size of its Muslim population

During a time of crisis and growing mistrust, perceptions can be all important. If asked: "Out of every 100 people in your country, how many do you think are Muslim?" What would be your guess? A study has measured the gap between our perceptions and the actual statistics. One thing is for sure: our internal fact-checker need to get a firmer grasp on reality.

The British polling company Ipsos MORI has led a study on the perceptions of certain social phenomenon across nine European countries. Among the different questions posed to respondents included the following question: "Out of every 100 people in your country, how many do you think are Muslim?"

Those whose guesses were furthest from the truth were the French and the Belgians. They overestimated the number by 23 percentage points. Coming close behind were Italy and the United Kingdom who estimated 16 people out of 100 higher than the actually number out followers of the Islamic faith.

In none of the countries surveyed (including in the rest of the world), did perceptions come close to the real number. Even micro-communities of Muslims in Poland and Hungary (where they represent only 0.01% of the population) did not go unnoticed – Hungarians guessed that Muslims made up 7% of the population.

The responses obtained were used to calculate an "index of ignorance", to find out in which country the inhabitants have the "least accurate" perception of themselves? In collating all the results of the survey, including those concerning the number of young people, the elderly, immigrants, the unemployed, etc… The country that counted the biggest gap between perceptions and reality was Italy.

Out of every 100 people in your country, how many do you think are Muslim?

In red: the perceived number of Muslims in the country.

In green: the actual percentage of Muslims in the country (In parentheses, the difference between the real and perceived percentages).