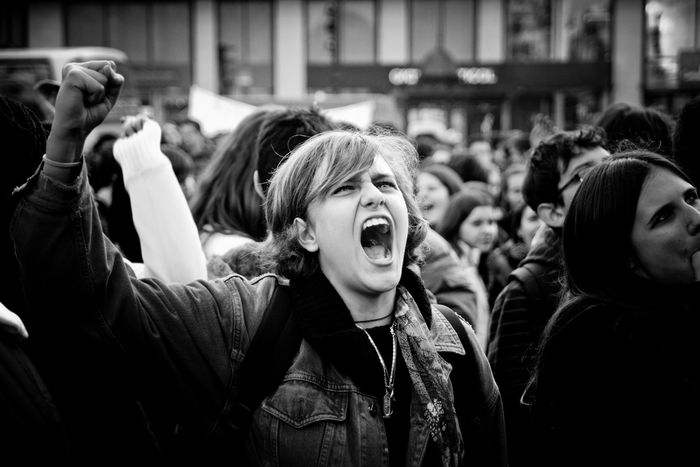 Macholand is a website that fights everyday sexism. Above all, it's an expression of a new, more popular feminism that's funnier and, for some, maybe a little more troubling. We talked to Clara Gonzales, the 24-year-old who's one of the brains behind the website. She did a bit of reassuring and tackled a lot of things head on. Together, we took a stroll into macholand over two cups of jasmine tea.

cafébabel: Your website says that "Macholand is first and foremost a way of saying enough is enough." How did it start?

Clara Gonzales: A year before launching Macholand, Elliot Lepers and I set up a bit of a silly website called 343 Idiots. It was in reaction to the "Touche pas à ma pute" (Hands off my whore) petition, which had been signed, among others, by writer Frédéric Beigbeder. The idea wasn't to get into a debate about the pros and cons of decriminalising prostitution, but to show that we couldn't let the public dialogue about it be taken over by people with equally sexist and idiotic views.

Clara Gonzales: Along with Caroline de Haas, who founded the Osez le Féminisme (Dare Feminism) group (which she has now left, Ed.), we realised that the internet is a hotbed of activists when it comes to denouncing sexism. The three of us – Elliot, Caroline and me – got together and, inspired by 343 Idiots, we started to sketch out Macholand. The principle behind it was to use tweets, emails or even Facebook messages to directly question people or organisations who make sexist remarks. We call each of those "actions". 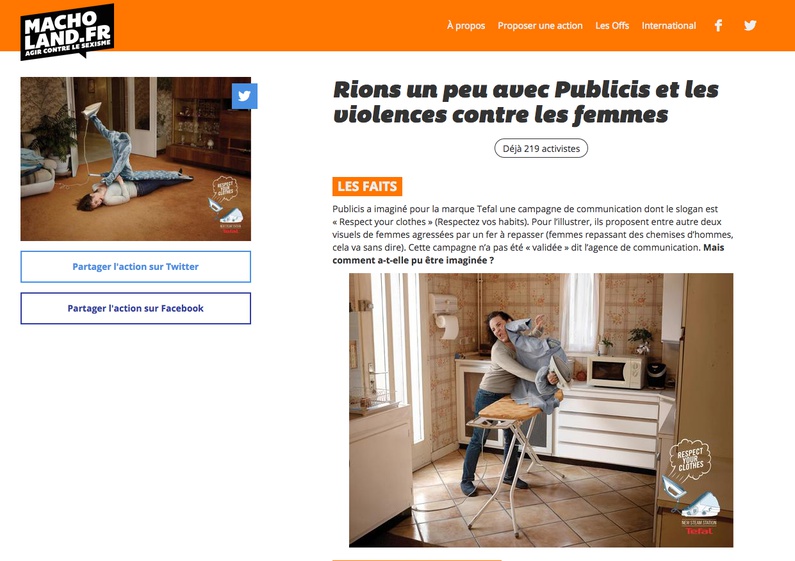 cafébabel: What inspired you to get involved in the fight against sexism?

Clara Gonzales: At the age of around 11 to 12, I already looked like a young woman. I could feel myself becoming an object of desire, without being fully aware of what that meant. It was a shock, and it was imposed on me by older men through inappropriate looks or comments. It was that initial feeling that opened my eyes to gender issues. Bit by bit, I realised that girls weren't aware of sexism, which frustrated me even more. It occurred to me that if the victims themselves didn't have the courage and understanding to acknowledge sexism, we'd never escape it. Lots of people think of themselves as supporting gender equality, but are still shaped by sexist codes. In my personal life, that's the hardest thing to deconstruct.

I think that there's also been a resurgence of sexist comments in the media over the past five years from figures who we give too much airtime to. As a young woman, I saw a world in which representatives constantly assume the right to define a set path for women. And they're all old, 50-something men who belong to a bygone era. If we let them make our decisions for us, we're effectively imprisoning ourselves in a world that's doomed to be unequal.

cafébabel: But some people were already fighting against those figures…

Clara Gonzales: Unfortunately, those people weren't being given enough chances to speak. Feminism has become mainstream recently, but we haven't really been talking about it for 30 years.

cafébabel: Has the internet become the ideal platform for that?

Clara Gonzales: Yes. By giving a voice to those who had no place in the dominant media, we've finally generated a public reaction. The internet has clearly made the struggle easier.

cafébabel: Do you think that chauvinism against men themselves is talked about enough?

Clara Gonzales: A "macho" (which translates more as "chauvinist" in English) is someone who's equally capable of discriminating against gay people. That's why LGBT and sexism-related causes are linked. The system we're talking about also has an enormous impact on men. Lots of people have asked why we don't take action against the Adopt a Guy dating website, but is that really at the heart of the problem? Does it really signify an issue with sexism towards men in modern France? No; the complete opposite.

cafébabel: Of course, but there's a certain type of man who's now starting to get seriously worried when he sees feminist-led action and is convinced that feminists are out to castrate him…

Clara Gonzales: It's normal to be scared of losing your privileges! We've never had equality. We've been living on this earth for millennia, and you won't find a single moment in history when women were men's equals. So if today we're saying, "This is it; we're going to succeed. It's going to happen in the 21st century," it's completely normal for that to freak people out – guys and girls equally. When male friends say to me, "Our girlfriends control us all now," I think it's mostly just a good way for them to get out of a complicated relationship. Relationships have always been complicated; feminism hasn't changed the way they work. 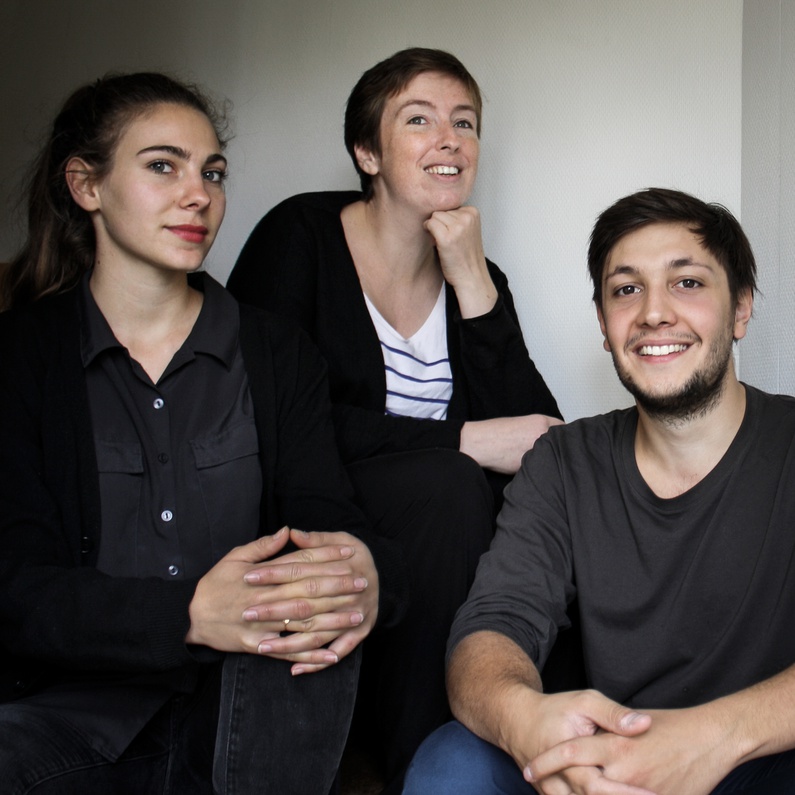 cafébabel: So why do guys still see feminism as depicting all men as "pigs" and all women as "victims"?

Clara Gonzales: Because there was an ultra-powerful feminist movement in the 70s. It was a fairly fierce movement, but that can be explained. In my eyes, no revolt can succeed when you're hand in hand with your oppressor. It makes no sense for the oppressed to be guided by their oppressors, just as it would have made no sense for white people to have led black people's fight for civil rights. You can include them, of course, but black people must lead their fight, just as women must lead theirs.

cafébabel: What are the repercussions of that today?

Clara Gonzales: There's been a backlash. For a long time, we've been encouraged to believe that what feminists did was bad, and that they wanted to dominate men. We've been stuck with that social construct for almost 40 years. Today, we’re on fairly well marked-out territory, and it's up to us to dismantle that construct.

cafébabel: How is society reacting to that in 2015?

Clara Gonzales: It's more or less receptive. Having said that, when we launched Macholand, there was a piece in Marianne magazine explaining that what we were doing was feminism for our mums' generation. At some point, journalists have to do a bit of investigating. I'd like the woman who wrote that article to explain to me how she came to that conclusion about us. To me, it's an interpretation that she inherited from a ruling class and has decided to pin to our project. It's stupid and it's reductive.

cafébabel: That same journalist also accused you of waging futile wars instead of concentrating on "real examples of gender inequality", such as the wage gap, domestic violence and household tasks.

Clara Gonzales: We can't do everything at once. We're already dealing with those issues, and everything is linked. We're tackling a system, and each organisation is choosing to fight against different parts of that system. I wouldn't go and ask a woman's shelter why they aren't tackling pay inequality.

Teaser campaign prior to Macholand's launch on 14th October, 2014.

cafébabel: How did your friends react when you set up Macholand?

Clara Gonzales: I had friends who supported the cause without being activists. But what pleases me most is when my female friends who didn't necessarily see feminism as a priority before now come to me and say, "Okay, maybe I was wrong." Particularly after all the insulting emails we were sent.

cafébabel: You received a huge number of those. Were you expecting that?

Clara Gonzales: Not to that extent, but it did make us laugh a lot. Some kids on a gaming forum decided that if that our website was unhackable, it must be because the code had been written by girls. But it was Elliot who did the website! We picked out the best comments and put them on a tumblr page linked to the site.

cafébabel: Feminists are often accused of lacking a sense of humour. How do you identify a sexist joke?

Clara Gonzales: It's about exclusion. Let me take the example of racism again. Imagine I'm sat in front of you – you're black and I'm white – and I tell you a really racist joke about black people. Would you laugh?

Clara Gonzales: Imagine that the person sitting next to you cracks up laughing and tells a second really racist joke, which everyone else then bursts out laughing at. Then imagine that the next day, they send you another joke. In the end, they'll say, "God, you've got no sense of humour. You're never up for a laugh. You're not open-minded enough." As a matter of principle, if I laugh at what you are, I'm excluding you from being able to laugh.

cafébabel: Women's rugby is also known as 'les soldes' (ed. shopping sales, referring to the scramble to get a bargain). Do jokes like that make you laugh?

Clara Gonzales: No, I don't find that funny, but it's not serious. It gets serious when people make rape jokes, though.

cafébabel: Do you think you're a woman who people tiptoe around when talking about feminism?

Clara Gonzales: I hope not! But it's true that some people try to provoke me. When you're really involved in and committed to a cause, your framework of understanding just isn't the same as someone who's not. You can quickly distance yourself and only spend time with people who think like you, but I don't think that's healthy. It's better to expose yourself to other interpretations of the world.

cafébabel: To what extent do you think our generation truly understands feminism?

Clara Gonzales: We're more informed; now we have to be careful. I'm thinking of this generation of guys who still don't understand it and are threatened by us. We've also missed the boat in terms of education, in the sense that we're continuing to grow up in schools where girls and boys don't have enough self-respect. But we've still made progress.