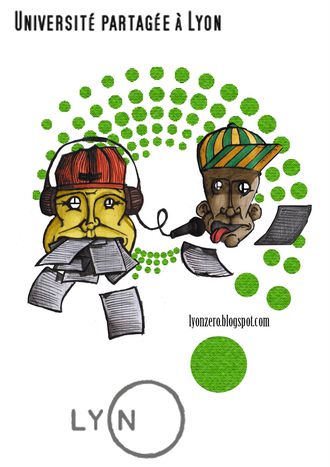 French university reforms saw the birth of revolts and protests, but also the emergence of alternative higher education projects in spring 2009 which administer themselves at the UA, Paris 14, Paris 3 and Paris 8 universities. The laboratory aim is to share knowledge and abolish hierachy - after all, going to university is not just about getting a job

'Hey! Teachers! Leave them kids alone!', because that’s enough of university hierarchy. Enough of mono-directional teaching, and grades, enough of retakes, and utilitarian concepts of learning. ‘It’s not really anarchy, nor the opposite, but it’s much closer to it due to the principle of self-direction,’ explains Edouard Piron, 22, a student at the University of Lyon 2. Those old dreams of 1968 have been revived. Since spring 2009, a new educational model called the 'self-directed university' has been established. Two projects were initiated in the southern French city after a long battle against the university reform law (LRU, 'relative aux libertés et responsabilités des universités'), which was proposed by the education minister Valérie Pécresse. ‘We got the impression that the battle wasn’t achieving anything. Many students wanted to propose an alternative to the law and the existing system,’ Edouard explains.

'You all learn, you all teach'

That's how the Lyon Zero university (université partagée in French), of which Edouard Piron is a member, and the self-administered university (UA,l’Université autogérée) were born in May 2009. They are the results of actions by ‘two different groups that have the same objectives but not the same methods.’ Lyon Zero has an associative statute, a legal management team and tries to work in partnership with Lyon 2 University. It claims not to want to alter the classic university model, but offer a choice between this model and more mutual learning. In its name itself, it goes against the more classic university names like 'Paris One, Paris Two'. Meanwhile, the UA plans to be entirely autonomous. The two projects share two essentially simple concepts: the absence of hierarchy and the sharing of knowledge, which Piron explains are otherwise ‘consumed and diffused in a unilateral way. We want a system in which everyone learns and everyone teaches, because we all have knowledge to share. The problem is that at university you study with the sole motive of finding a job. We don’t want to supplant this aim, but to also help people learn just for the joy of knowledge.’ 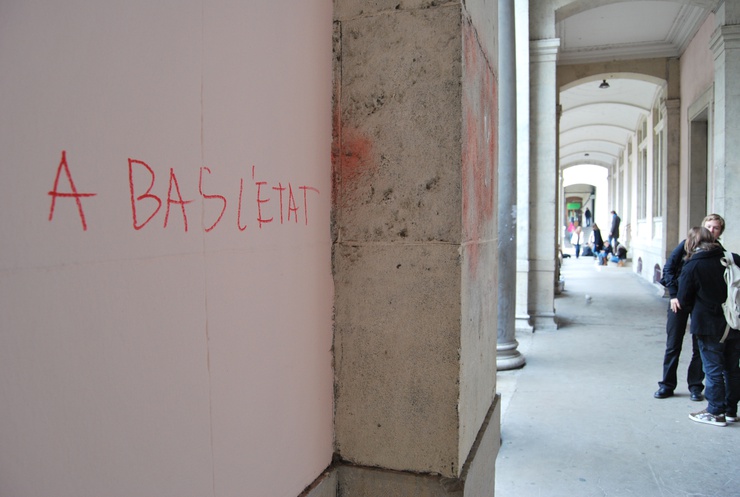 As some anarchist doctrines predict, in these universities rules are substituted by motivation and grades are substituted by self-assessment, as in the Steiner-Waldorf school model, named after the Austrian philosopher Rudolf Steiner who pioneered a more imaginative, co-educational system. However, this is not to say that rules are absent. ‘At the beginning they’re necessary and later, when the project’s working, we remove them,’ Edouard says, citing one of Bakunin’s concepts (Mikhail Bakunin, a Russian revoluntionary nicknamed the 'founding father of anarchism' - ed). But, at least as far as ‘Lyon Zero’ members are concerned, there is no aim to replace the traditional system. ‘We want to show another, complementary way.’ Like their courses, which are complementary to traditional teaching. ‘The type of lesson you have depends on the people who participate in it. Therefore, since we are alternative, the subjects are newer and have never been previously covered at university.' Some examples of the subjects tackled are the concept of time and speed, gender discrimination, the micro-politics of groups, contemporary dance and nomadism. On the university's official blog, it's apparently Oriane who leads 'reflection on relative genre discrimination and sexual orientation'. And there is a solution should there be a shortage of ideas: ‘You can always study a topic together, do some collective research and then discuss it together,’ says Edouard.

Almost thirty members are now active in the Lyon Zero organisation, with many others following it, including students, professors, pensioners, unemployed people and workers. Others have expressed interest in following its courses. At times, even the more open lecturers support and participate in the project. In France the experiences of similar projects have been diverse and often short lived. At the beginning of the student movement against the LRU in November 2007, the ‘self-directed training and research unit (UFR)’ was created at Paris 3 University. In November 2008 it was the turn of the ‘UFR Zero’ at Paris 8. A year later, when Italian students and researchers brought their classes to the streets and piazzas, their Parisian colleagues created the ‘Paris 14 University’, the last university establishment ‘after the creation of Paris 13 in 1971’. Like the automatically-run Parisian metro line 14 that it is named after, the university ‘has neither driver, nor president, nor workers. It’s autonomous, self-sustaining. Critical, nomadic and open to all,' says Guillaume Lachenal, a research assistant at Paris 7 and member of Paris 14. Its current academic calendar is a blank slate, but that doesn’t mean the dream is over: ‘We’re not dead,' says Guillaume Lachenal. 'We’ve slowed down for a time considering the absence of general strikes these days.’