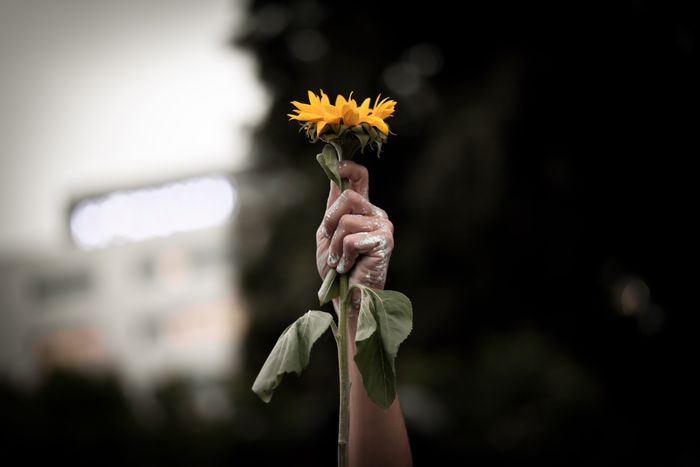 Lucia Martin: Spanish youth are ‘you can see them coming’ generation

Stigmatisation and pity were the two main attitudes towards today’s youth until the 39-year-old Spanish journalist opted to say ‘enough’. This generation of young Europeans are drowning in short-term work contracts, never-ending internships and minimal salaries. Yet aren’t they just ‘precarious’ in a society which is brutally competitive?

cafebabel.com: Lucia, your book offers a strong defence of what you term the ‘lost generation’, a group of young Spanish people between 25 and 35 years old. What led you to write it?

Lucia Martin: Well, really the main objective of the book was to find out why today's young Spaniards seem to drag so far behind other Europeans. I had to demonstrate that they were a ‘defeated generation’. As I delved further and further into my research I discovered that this wasn’t so. My whole idea changed radically. Maybe it would have been better to call the book ‘beaten society’ – for these young people aren’t what the rest of the world says they are.

cafebabel.com: How would you define this group in a few words?

Lucia Martin: They’re the ‘you can see them coming’ generation that have to search for their daily bread, who are filled with uncertainty because that’s the lot they been given. They’re apolitical, grumble about the trade unions, are sceptical, reactive and supportive, something which is never mentioned. They are the so-called mileuristas (those who earn 1000 euros tops per month) in Spain or the 700 euro-ers in Greece, the generation Y, the lost generation or the baby losers in France.

cafebabel.com: Are they victims of education, their training and qualifications or of the teaching system?

Lucia Martin: I don’t like looking for scapegoats. You have to broaden accountability. It’s true that a university degree used to serve as a guarantee for the future. That can’t be said anymore. The education system doesn’t match up with labour market demands. It’s great if someone loves philosophy but perhaps they should stop to think that nowadays it won’t get them anywhere and they’d be better off studying for a degree that will lead to a job which is more in demand.

cafebabel.com: In that case is it better to forget about vocations and adapt ourselves to labour market demands?

Lucia Martin: If you like philosophy or anthropology, you can always study them when you have a job to fall back on – when you’re already earning money. Vocations are great but if you see that yours is just going to lead you straight to the back of the dole queue, maybe you should leave it until later. At the end of the day, it isn’t your vocation which will put food on the table.

cafebabel.com: You say in your book that Spain is the ‘country of university qualifications’. There are Spanish universities in almost every region and the number of graduates is increasing every year. What to do?

Lucia Martin: I don’t know the solution. Maybe by limiting university places, because we have to get out of this situation. You can’t offer hundreds of places on degree programmes to people who, later on, will only be adding their names to the job-seeker lists.

cafebabel.com: The problems are growing: Ireland, Portugal, Greece, Spain… Is the frequently heard ‘you have to go abroad’ now more of a ‘you have to get out of Europe’?

Lucia Martin: There are many misconceptions about going abroad. Before everything was different; people emigrated because of desperation - they moved city or country without even thinking about language barriers. It was in these conditions that my father moved to Paris. It’s true that in Spain we’re a little unusual. People used to find it tough to relocate to take up employment elsewhere. Now people are obliged to do things that in previous times were absolutely unthinkable. I think that the current situation is an evil facing many western countries. The opportunities are now in the emerging countries - you have to go a little further than Europe to get anywhere.

cafebabel.com: Young people can’t find work and so many opt for furthering their education, therefore lengthening their CVs only to find out at a later date that they are ‘overqualified’. Is there a way out of this vicious circle?

Lucia Martin: Trusting that education and education alone can sort out your life is a fallacy that has always existed. Very few people, especially in Spain, take the initiative and start their own business because they’re afraid. Admittedly, it’s true that to embark on this journey in Spain you have to almost be a ‘kamikaze’.

'I’d rather my daughter slung a rucksack over her back and discovered the world; she’d learn a lot more'

It’s a very long and complicated process with a lot of red tape. If truth be known in the future I’d rather my daughter slung a rucksack over her back and set out to discover the world; that way she’d learn a lot more than going from university to university. There are people with two degrees and three languages. Okay, great, but the person standing next to you has four degrees and five languages.

cafebabel.com: Your book was published a few months before the 15-M movement was put into motion. What opinion do you have of the protesters?

Lucia Martin: 15-M is the practical demonstration of what I defend in my book: that these young people do have values. I hope that this group of people will be the seeds of a movement of people that really start setting things in motion. Everything that’s happened has reconciled me a little with Spanish society. They are even blocking evictions! I hope they’re leading the way in these issues which are at the moment extremely unjust. Let’s not forget that behind the banks forcing these evictions are people of flesh and blood. Don’t those gentlemen have any morals?