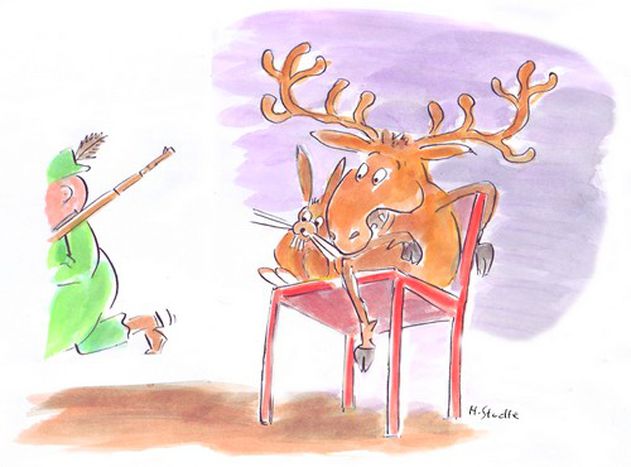 Our tip of the day hides behind this 'hat', pinched by a mischievous typographer. It would have once read la châsse or Reliquienschrein ('reliquary or shrine'), in reference to a large wooden, stone or metal container; housing the remains of a Saint. Nothing to do with the warlike pastime, armed with a rifle, in going to shoot some rabbits on a Sunday; as is implied by the 'hat'-less version.

Inside a reliquary would be an arrangement of relics, such as venerated objects from the middle ages. Pilgrimages, like those to Saint James of Compostela, bring people to kneel and pray. But those who return to the fold find that during their absence they have lost their position in the congregation. Quite a difference in meaning!

According to the Italian equivalent, chi va a Roma perde la poltrona ('he who goes to Rome loses his armchair'), on his return from Rome, the Italian too finds he has lost his position. The Spanish, en route to Seville, are even less likely to recover their vacant place: quien va a Sevilla, pierde su silla.

Yet if all roads lead to the eternal city (Rome), why the devil hunt the boar as far Andalusia? In short, on the banks of the Guadalquivir River during Holy Week parades, our hunter could only leave himself open! If the German stays neutral on the subject, then across the Channel the unfortunate are left to shed tears in finders keepers losers weepers.

Should we conclude then that with the protestant reform having conquered spirits, it casts an evil eye over these superstitious practices? They are so crystal-clear that proverbs shouldn’t be taken as the Gospel truth. Speaking of which, in French slang les châsses also means 'the eyes'. So from now on keep your eyes open.