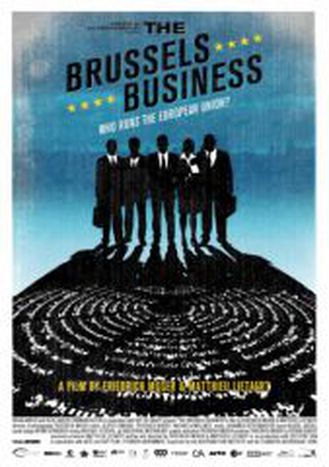 Lobbying at the EU: An Opaque and Unregulated World

By Pauline Maroy, translated by Danica Jorden They’re called lobbies, these private interest, pressure groups… But who are they?  What do they do?  And why are they a problem?  Five public figures concerned with the subject shared their points of view on 6 November at a conference at the Free University of Brussels (ULB).

A common thread emerged during the discussion:  lobbying should be more transparent and subject to more regulations.

The conference kicked off with a projection of the documentary “The Brussels Business,” by Matthieu Liétaert and Friedrich Moserqui, offering a preliminary approach to the phenomenon of lobbying.  The documentary proposed the idea that European institutions have today become the source of about 80% of the laws affecting daily life for more than 500 million Europeans.  The film raised the following question:  Who’s running the European Union?  The question of the rising part played by private interests, that is to say, lobbies, is raised with respect to the creation and writing of European laws.  The film questions the legitimacy of the present system:   Is this still a democracy?

Matthieu Liétaert, one of the directors of the documentary as well as a PhD in Political Science, was present for the evening.   He supported the film’s proposition by adding that there is an imbalance between Brussels’ interest groups.  “75% of the interests represented are commercial.  Only 10% are interests supporting NGO’s and 5% by unions.  In a true democratic debate, that’s a problem.”

After projecting the documentary, the next speaker, Amandine Crespy, professor at the ULB’s Institute for European Studies wanted to replace the role of lobbies within a larger vision:

"When one looks at the film, one comes out of it thinking that lobbies are particularly powerful in the EU.  But in fact, the model for lobbying is widely used, notably also in the USA.”  And she asks, “Is it really different on a national level?  No, for example, look at the influence of patronage in Belgium".

What purpose do lobbies serve?

, lobbyist at the , was also at the discussion table.  He explained his job

"The essential point of my work is not to make pressure.  My job is to inform my members who are worried about new European laws, so that they know how to run their businesses, what they’ll have to change.” As to relations between elected officials and lobbyists, he noted that, “deputies need to call upon us to inform themselves about a subject and to get expert information".

, spokesperson for European PS deputy Marc Tarabella, expanded on this topic: gave as an example the ACTA Anti-Counterfeiting Trade Agreement presenting a threat to freedom of expression online.  The European Parliament voted against this agreement last July, thanks to the initiative of a public interest group which succeeded in influencing the decision.  The influence of this type of interest group is also therefore possible.

"A lobby is a vector, a source of information for parliamentarians, during the different phases in the creation of a law, such as the writing and voting. Lobbies have advantages and disadvantages. They give elected officials different views on a subject.” According to him, a pressure group is therefore , “fundamentally not bad and helps advance things".

But for Amandine Crespy, that type of public mobilisation is often not the case since there is a lack of interest on the part of national medias for European issues. “As long as we’re not talking about Europe, it’s easier for interest groups (Editor’s Note: commercial) to have a stranglehold on laws.”

The way lobbies work should be clearer

According to Emmanuel Foulon, “”. For instance, lobbyists bringing gifts to or having drinks with elected officials.  “IBut he noted that.”

the problem is that the word lobby has been sullied by the dishonourable onesf the men and women in politics are honourable and promote the public interest, everything goes well”. “lobbies should work in full transparency

This thread was apparent throughout the conference through several speakers. Matthiew Liétaert felt there must be more rules. “”.

Lobbying will always exist, but it must be regulated.  It is too often subject to too few rules

For Yorgos Vassalos, member of the , if the ideal were to “” and “”,  he has how to put a regulated and more transparent system into place. Firstly, by establishing a mandatory registry for budgeted lobbies that would be available to the public online.  Next, by publishing a list of the meetings held between lobbyists and European Commission officers.  Finally, by balancing the power between the different interests present in the working groups:  those representing private business and those defending the public interest (NGO’s, labour unions).

As for a lobby registry, . But lobby registration is voluntary. Emmanuel Foulon emphasised that, “”. Pascal Kerneis for his part claimed the fact that the European Service Forum was on that registry.  “I’ve always tried to be as transparent as possible.  We have nothing to hide.”

there already is one75% of lobbies aren’t on it

Another thing to be gotten from this conference, besides the need for greater regulation, was a fairly pessimistic portrait of present-day Europe:  national medias aren’t interested in it, preferring to concentrate on current events in their own respective countries.  And European elections are less and less popular.  Pascal Kerneis noted that: “”, before adding, “”.  A word to the wise….

Europe was a dream project, but there aren’t enough people who still believe in itIt must be defended