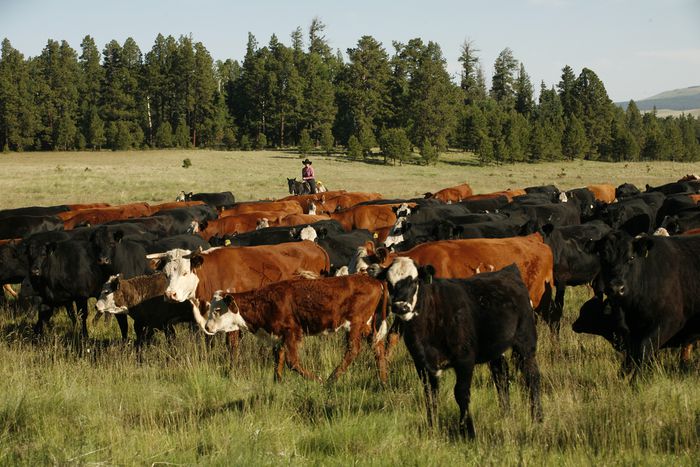 Livestock: the biggest threat to our planet?

Opinion: The production of meat has devastating consequences for our planet - it is the main reason for wasting water, destroying preserved land and several species of animals. The EU is not acting as large corporations continue to benefit.

A few years ago I watched Al Gore’s documentary, “An Inconvenient Truth”, and I was alarmed. It’s not that I didn’t know about the environmental crisis facing our planet, but when I was confronted with solid empirical data and polar bears dying in the Arctic in front of my eyes, it touched me deeply.

As of that moment, I began being extra careful with all my actions that could have any harmful impact for the planet. Basic things like: brushing my teeth with no running water, turning off all unused lights in the house, trying to recycle, never throwing trash (as well as chewing gum!) to the floor, and many other little things that can really make the difference.

Recently, I saw another documentary “Cowspiracy: The Sustainability Secret” and I realized that despite all my personal efforts to contribute positively to the planet, it is far away from being only up to me or up to us, common citizens. Apparently, the biggest threat to the conservation of our world resides in livestock. After being confronted with this, I researched the issue further and it made me more worried. The desire and habit of large proportions of the world’s population eating meat is essentially ruining the planet. Livestock that is farmed for food and dairy products, produces huge amounts of methane and nitrous oxide, greenhouse gases which trap more heat than carbon dioxide.

Last year in Germany, methane gas released by cows in a woodshed caused an explosion. This was labeled as funny at the time, but it's a microcosm of the larger problem at hand. The main source for methane is the enteric fermentation, a digestive process that occurs in ruminant animals such as cattle, goats and sheep.

According to Cassandra Brooks from the Stanford Woods Institute for the Environment, “meat production is projected to double by 2020 due to increased per capita global consumption of meat and population growth. Most of this increase in production will come through industrialized animal production systems. These trends will have major consequences on the global environment. Vast transfers of "virtual" energy, water and nutrients will occur among nations that will have large impacts on local and distant environments. A full accounting of these trends and projections will give us the capacity to propose policies to ameliorate the negative aspects of these developments and position us to address the multiple consequences of industrialized animal production systems.”

The world's determination on limiting global warming to under two degrees is clashing with the absent measures to stop the massive emission of greenhouse gases. When it comes to preventative policies, the European Union seems to be unwilling to trigger a social awareness about the subject. Italian MEP Giovanni La Via said that “people are aware that the food they eat is an important factor affecting their health, but what is less well-known is the impact that producing and consuming food has on the world’s resources.”

Anja Hazekamp, Dutch MEP for the Party for the Animals has said that getting the EU’s population to eat less meat collides with the current agricultural policy of the Union as almost half of the EU budget is spent on subsidies for agriculture and fishery. These subsidies go to projects which promote European agricultural products, counting meat and dairy.

Moreover, in October 2014, Hazekamp and other 36 MEPs wrote a letter titled “Building a Sustainable European Food System” to the Commission, which addressed the livestock issue as well as a report on sustainable food that was supposed  to be released to the public in 2011 but never was. A return letter was sent from the Commission, when still under Jose Manuel Barroso's presidency, but the content was not explicit enough and the explanation for the delay of the report's publication was non-existent.

Profit before the planet

Think about the meat sold by fast food giants (McDonald’s, Burger King, KFC among others), not only in terms of the poor quality meat that you are eating but also in the amount of meat that these large companies need in a daily basis to run their respective businesses. They clearly don’t give a damn about the environment as long as their business is profiting. Is this indifferent to you?

I have more than that to worry about. I think about my little nieces and nephews, and the whole generation that will come after us, and this is what really makes me reinforce my conviction to help bring about change.