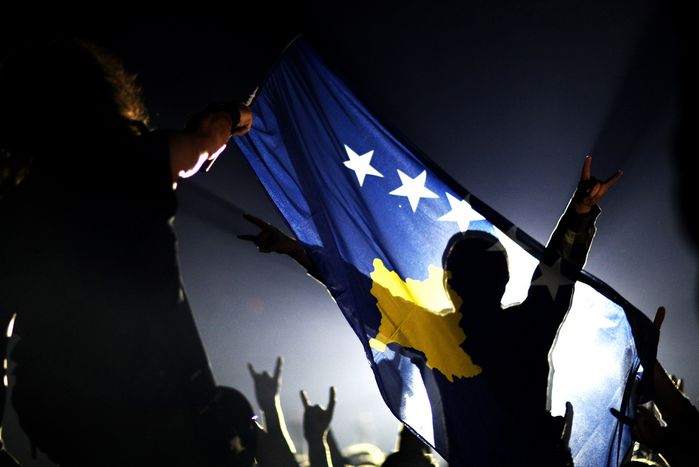 Live from Kosovo, the country which turned five

On 17 February 2008, nine years after the end of the war, Kosovo unilaterally declared its independence; 98 countries have since recognised Kosovo. While Kosovo may have acquired its own sovereignty with the departure of international observers in September 2012, its people are still in search of their own identity

'Today is an important day because it allows us to come together after all that we have lived through,' says Resarta. She is 24, was but only ten years old at the time of the 1998-1999 conflict, seeks comfort and historical acceptance on the date marking 17 February 2013. The pretty brunette from the north of the country has travelled to the capital Prishtina to celebrate the fifth anniversary of Kosovo’s independence. We meet in front of the famous 'Newborn' sculpture where many youngsters around her, with paintbrushes in hand, repaint the seven letters that compose the word one by one. Erected in 2008, this sculpture has become the symbol of the new country, the newest addition to Europe. Originally yellow in colour and marked with graffiti, the sculpture has been repainted for the occasion to display the colours and flags of the 98 countries that have officially recognised Kosovo - excluding Spain, Greece, Romania, Slovakia and Cyprus in the EU.

A few hundred metres away, Kosovan military personnel marched down Mother Theresa avenue. What with the police, infantry and tanks, you would be forgiven in thinking you were stood watching the 14 July parade along the Champs-Elysees avenue in Paris. Only the concrete under foot, still unfinished, served as a reminder that here there are still many things to do. Squashed behind the security barriers, thousands of onlookers wave balloons and flags. That's the Kosovo flag of course, but also the flag of its Albanian older brother. 'We come from Kosovo but our nation is Albania,' explains Xherdan, a 32-year old journalist in the crowd. 'At the start we were one and the same country.' 90% of Kosovars have Albanian origin. 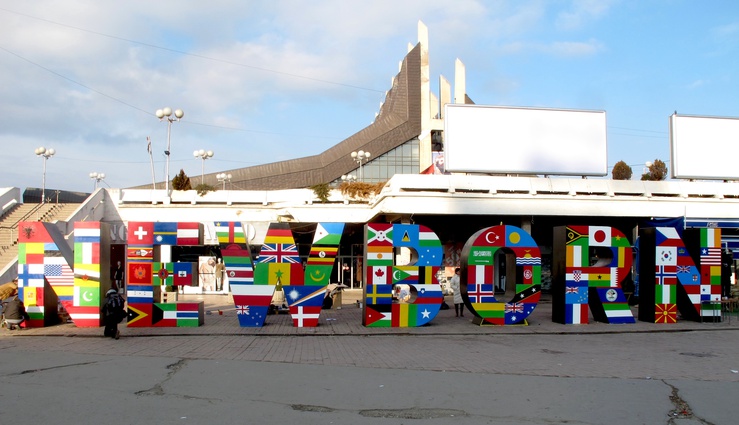 50km further north, Mitrovica is a small town close to the Serbian border where ethnic tension prevails between the Albanians and Serbs in Kosovo. Divided in two by the Ibar River, the once united town of Mitrovica is now split, with the Serbian majority in the north of the town pledging their allegiances to Belgrade. In the streets, the portrait of Serbian president Tomislav Nikolic is everywhere. The locals are uninterested by the celebrations taking place on the other side of the river. 'OK, they say they are independent now? That doesn’t bother us, today is a day like every other,' says Arsenia, her eyes directed towards the south of the town.

Party without too many partygoers 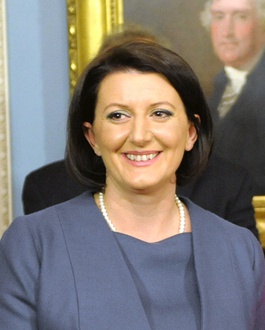 On this particularly anniversary, a number of Albanian families living in the northern part of the town cross the wooden bridge that spans the Ibar. 'In November, I was in Tirana for the 100th anniversary of Albania, and this morning I’m heading to the south side of Mitrovica. I tell myself that I am a Kosovar so it is normal for me to celebrate the independence of my new country,' said Agron, 29, with a smile on his face. Others don’t have the heart to celebrate. Born in the northern side of the town, Erdan, a telecommunications engineer, fled from Mitrovica during the war. Today, he has abandoned all hope of crossing the river once more. 'The bridge was built to reunite the town. Instead, it has become a border,' he explains, disheartened, as a few machine gun shots echo in the distance.

Back in Prishtina, the sound of 'Europa', an adopted anthem without words to respect the different minorities in the country, ring out around the crowded parliament square. The country’s president Atifete Jahjaga, 37, takes the microphone. A former policeman trained by the FBI, she took over the reins of the country in 2011 following the annulment of the last presidential election result. In the presence of Bujar Nishani, the Albanian head of state invited to the ceremony, Atifete Jahjaga reaffirms her desire to fight the corruption that plagues Kosovo. When she began to mention Serbia, with whom she hopes for good relations, she reminds us: 'The Republic of Kosovo is an irrefutable and irreversible reality.'

As night falls, the crowds converge once more along Mother Theresa avenue for a concert. Yet despite the vocal efforts of local popstar Vesa Luma, the party never really gets started. 'It is hard to celebrate with all the problems that the country faces,' says Lorik, a student by day and taxi driver by night. '40% of the population is unemployed, nobody gets enough food.' At the 'Newborn' statue the level of euphoria is far lower than it was five years ago at the declaration of independence; even the midnight fireworks display fail to light up this anniversary evening. 'I do not know if this is a special day for me because what counts for me is Albania,' Ergul confesses, staring into the distance, largely uninterested by the festivities. 'Before I was Yugoslavian, then Serbian, now Kosovar. Today I no longer know where I come from.'