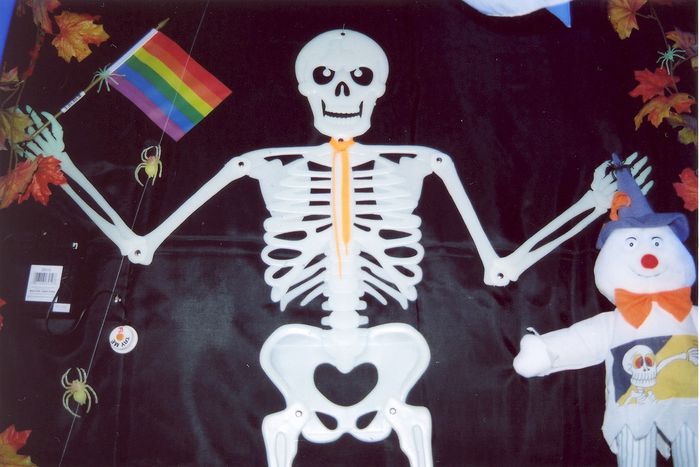 Lithuania’s gay skeleton in the closet

Anxious to shake off the social legacy of Communism and conform to EU standards, Lithuania is trying hard to integrate its homosexual minority. The press, the Church and public opinion are dragging their feet

It's nighttime in Vilnius, with temperatures minus 30°. A neon light shines dimly from the second floor of an apartment block. ‘It’s there.’ Eduardas Platovas points a finger to the square of light, home to his struggle for more than a decade. Surrounded by concrete and half-light, the headquarters of the Lithuanian Lesbian and Gay League (LLGL) prefers to remain anonymous. Nothing seems to distinguish this apartment from the others except for a low murmur of voices that escapes into the hallway.

Once a month, in this small apartment painted a vivid yellow, members of Lithuania’s gay community come together to exchange ideas in safety and privacy. Tonight twenty people from all parts of the country are here for a lecture and discussion on homophobia chaired by a well-known professor from Vytautas Magnus University in Kaunas, Lithuania's second largest city. ‘In Lithuania, gays are used to keeping quiet,’ says Virginija, 25 years old, a lesbian and LLGL militant. ‘There isn’t any sense of belonging to a group: no one thinks anything can be done to change our situation.’

A series of images pass across a screen, in rhythm with the tick-tocking of a clock and the approving nods of the audience members. Hanging inconspicuously above the fireplace is the rainbow flag of gay pride. The lecture finished, everyone dashes for the refreshments laid out in the next room. Time for wine and petit fours, greetings and discussion. Some socialise, others simply observe. A way like any other to forget the humiliations of daily life. 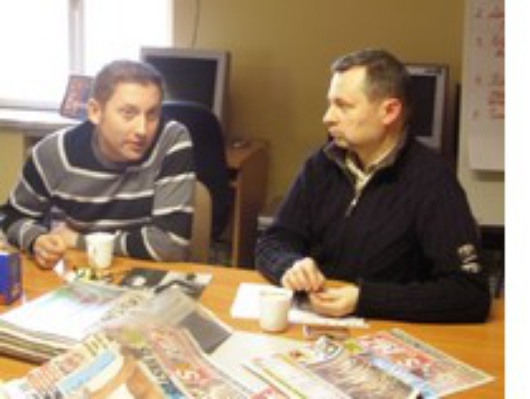 In this Baltic state, where the goverment boasts that ‘the wind of capitalism blows’, homosexuals remain a minority silenced by discrimination. According to an investigation conducted by the LGL in 2003, 68% of Lithuanians would prefer a drug-dealing neighbour to a homosexual one. Two-thirds of gays are afraid to reveal their sexual orientation to their families and 89% are frightened of the consequences of coming out in the workplace.

‘Of course, homosexuals in Lithuania are not subject to attacks in the street,’ admits Mindaugas, legal counsellor for the Tolerant Youth Association (TYA), who refuses to reveal his full name. ‘Nonetheless, the laws which in theory protect sexual minorities are not applied in practice.’ Seventeen years after independence, the marks left by the Communist yoke rest visible under the bright varnish of Europeanism. While it was a joke to say that ‘sex did not exist’ under Stalinism, sexual relations between persons of the same sex were nonetheless considered a crime, and punished as such.

After 1993, under pressure from Brussels, the Lithuanian government hastened to soften its laws, playing the card of upcoming entry into the EU as justification. A decade later, a national program for the protection of minorities was put in place and a commissioner for equal opportunity named. The icing on the cake: in 2007 the EU awarded the country a budget of 150, 000 euros for a series of projects called ‘Equal’, aimed at helping minority integration. An attack of good conscience? 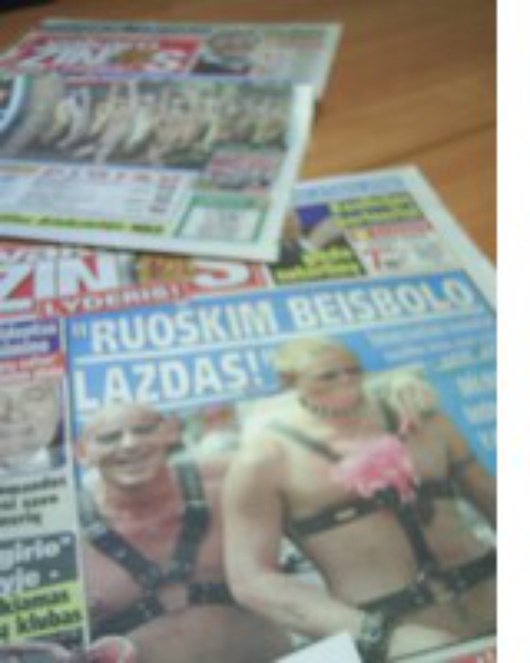 ‘Our politicians didn’t dare to say anything negative about homosexuality for fear of compromising the process of integration into the EU,’ adds Vladimir Simonko, one of the founders of the LLGL. ‘But once we were a member of the club, no one hesitated to preach a return to traditional values.’ An ambivalence tinted with hypocrisy, as illustrated by a recent survey conducted by the daily paper La Reppubblika ('The Republic'): of 140 members of the Seimas – the Lithuanian parliament – 100 consider homosexuality to be a ‘perversion.’ ‘Tolerate homosexuality? And why not accept zoophilia?’ Conservative deputy Kazys Bobelis went so far as to declare.

Lithuania is not the only country in Old Europe where gays are confronted by authorities with reactionary views. Between the homophobic attacks of the Kazcinsky brothers in Warsaw, and the eggs and excrement thrown on marchers in Latvia’s Love Parade last summer by members of the extreme right, gays throughout the Baltic region are far from living the good life.

There is a saying that claims that Lithuanians only trust in the president, the church and the press. In matters of sexuality, the influence of the last two has proved itself to be at least as harmful as that of politicians. The local press, principally composed of tabloids, repeatedly prints homophobic allusions and jokes. ‘Chicken-prick’ (vištgaidis) is the nickname given to gays in the pages of the daily Vakaro Zinios ('The Evening News'). As for the church, glorified by its image of ‘resistance’ during the Communist era, it has seen its conservative and family-oriented ideas grow in influence in a country already 80% Catholic. 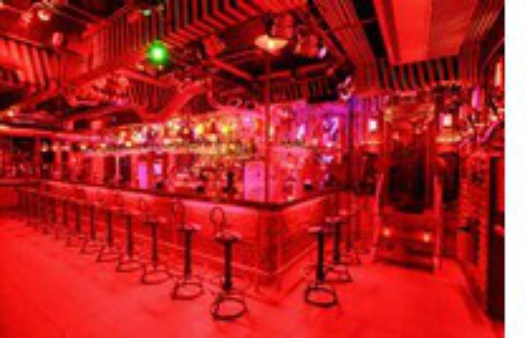 There exists yet another obstacle to the integration of homosexuals, one inherent to the Lithuanian mindset. ‘Lithuania is victim of a sort of cultural paralysis,’ says sociologist Arnoldas Zdanevicius. ‘Gays have great difficulty in coming out,’ he explains. ‘No important public figure has ever admitted to the world their homosexuality.’ Only one has dared, a well-known designer who in an interview stated that he had a ‘cosmic sexual orientation.’

Gay only on the weekends

Aside from ambient homophobia, is there a lack of involvement on the part of Lithuanian gays themselves? ‘I have the impression that the majority of gays are only looking to party,’ responds Virginija with severity. ‘No one wants to engage themselves ideologically.’ Because in this ‘narrow-minded’ country, news travels fast. Too fast for certain tastes; and not fast enough for others.

At ‘Men’s Factory', the gay club opened two years ago in Vilnius by the Russian Alekseï Terenteï, cardboard phalluses sprout in the corners, the dark rooms are never empty and a shower of water soaks the middle of the dance floor. The price to go wild in this arms factory converted into S&M paradise? 40 litas (20 Euros). The rather upscale price is not high enough to stop several hundred aficianados from coming each weekend, not counting appearances by Russian ‘VIPs’ who, according to the owner, ‘are crazy about the place.’

A peroxide blonde with bulging muscles, Terenteï sticks out his chest when he asserts that he is the 'only official gay in the whole of Lithuania.’ He adds that he ‘has had to fight tirelessly against the establishment and the police’ to assert his identity. In his eyes, a club like ‘Men’s Factory’ does more for the gay cause than any anti-discrimination association. ‘The associations know how to get subsidies, but where is the tangible result of their action?’ he asks provocatively.

Sensitisation campaigns, seminars and debates have certainly been organised by the Lithuanian Gay League. In October 2007, the annual conference of the International Association of Gays and Lesbians (ILGA) will take place in Vilnius, a fact which is already stirring up the wrath of local politicians. At the same time, Lithuanian homosexuals do not have the intention to mobilise themselves too overtly or to play ‘kamikaze’. Translation: time to come out of the closet.

‘There is a lack of solidarity in the gay community, and too many differences of opinion between the major groups defending sexual minorities,’ points out Mindaugas. As a consequence, the interests of gays are badly or insufficiently represented. For Eduardas Platovas, LLGL's president, that argument does not hold weight. ‘We have been trying for more than 10 years to defend the rights of gays, and we hardly see any change,’ he sighs. ‘Perhaps we have been too idealistic. The younger generation is more interested in business than in human rights.’