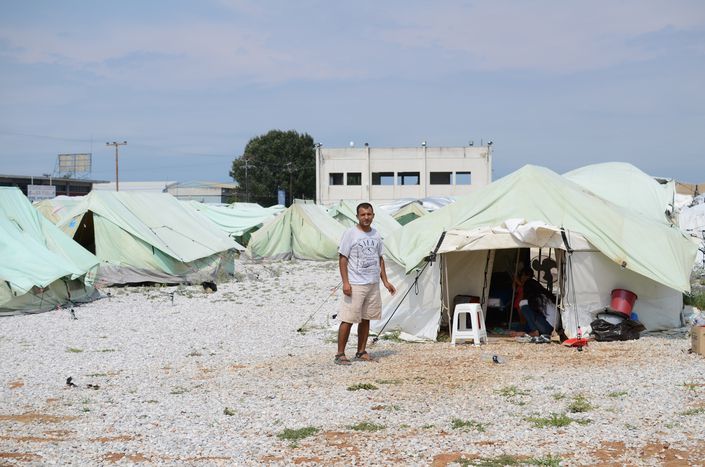 Crippling loneliness, a lack of educational opportunities, no prospects, arguments, unsatisfactory medical treatment, flashbacks to images of war and terrible memories - daily life in Greece's refugee camps is gruelling. "Europeans should come and see for themselves just how hard life is here."

Camp life has left deep circles under her eyes. Ten-year-old Schahd shares a tent with her younger sister, three brothers and parents in Karamanlis Sindos, a camp located at the edge of the north eastern suburb of Thessaloniki, which is home to 600 people. The camp is a large, dusty, brick hall, which in the past housed a leather manufacturing plant. Moisture is carried into the tent from the nearby ocean. Mosquitoes fill the neglected fields, leaving bites on the hands, feet, and faces of residents, and which take a long time to fade.

At the camp, the Greek army calls the shots. Surveillance, however, is lax. Two unarmed men in camouflage patrol the area, making small talk. Last spring, the long deserted factory buildings became home to refugee families. There are almost 60 refugee camps of this sort in Greece, under the jurisdiction of the Ministry of Health. A good two-thirds of the 60,000 refugees in Greece are languishing in such camps. Following the closure of the Macedonian border and the EU-Turkey deal, they were transferred to these camps, similar to the Idomeni transit camp, which was evacuated in May 2016 after being deemed unsanitary.

"They attacked us with tear gas," Schahd says gingerly, looking back on her time at the Idomeni camp. There is no sign of resentment in her voice, however; Schahd seems to have resigned herself to her fate. The sun throws its warm rays on the factory's narrow window panes. Schahd makes herself useful, helping to distribute the rations. Potatoes with vegetables and a piece of dry bread are available, twice a day.

"If you keep treating people like animals, people will lash out" 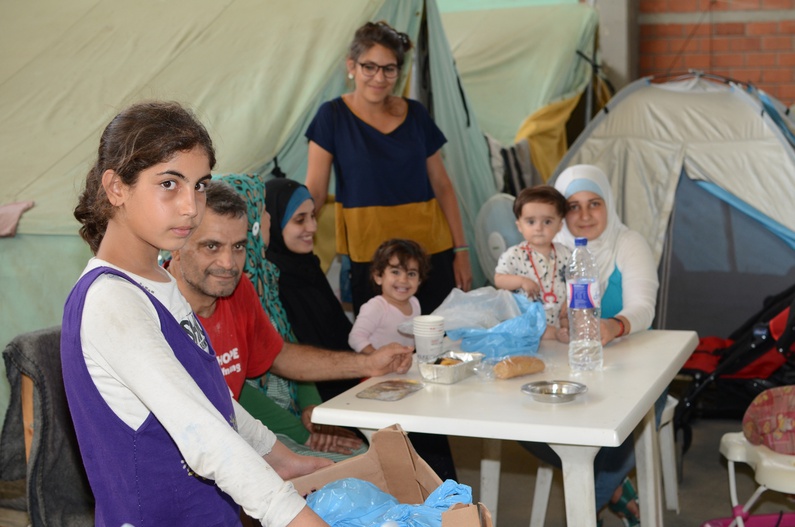 Back in the family tent, the girl vents her frustration: "There is nothing to do here. We wait around all whole day. It's hard not to go mad. If only I could go to school!" An education is what the young people here most desire. The tent in the second hall, row four, is barely distinguishable from the others. The blinds are drawn back, and one can see into the room, which serves as a bedroom, dining and living room for the Sbihi family. In Deraa, when Mr Schafik Sbihi was a taxi driver, he was able to give his wife and children a decent quality of life. Then the uprising against the regime in the southern Syrian town began. Today, all that remains of their former life are these four fabric walls. On the wooden dinner table, there is tea and a bowl of green grapes. The family, like many, made the move in the hope of establishing a new life in Europe. But the closure of the Balkans route was a slap in the face. "If we aren't allowed to go any further, Europe could at least pay out money," says Schahd. She recently had a cold, which "lasted about a month because there was no medicine available."

Severe supply problems are being reported in many of the camps, says Hassan, 34, a paramedic from Aleppo. A Kurd, he is working at a camp close to Vasilika, a town in the south-east of Thessaloniki, where he attends to nearly 1,000 people. "There are doctors at the camp, but they don't administer medication," he says. In his tent, he shows us his small but modest collection of medication: prenatal vitamins; asthma spray; diarrhea remedies donated by humanitarian organisations. "I can't offer more than first aid," he explains. The demand is huge, not only for doctors. "Each day, three or four people arrive, suffering from post-traumatic stress. If there is nothing else that can be done, I will call the ambulance. But sometimes it simply doesn't show up. Once we had to wait three hours. Then someone called us and asked: 'Do you need us?' That's how it works here."

In Hassan's camp, Kurds and Arabs are segregated. "There were too many problems between the two groups," reports a Syrian who wanted to remain anonymous. A group of young Kurds voluntarily started a fight, which involved knives. "People fought over petty things, over shared property, over a chair or over food. Everything is in short supply here," the man says. As a general rule, police don't intervene for fear of becoming victims themselves. Many are armed; one in two men have a knife on them. "It's a widespread issue in the camp," says volunteer Johnny Tutton, 33. "It's a ticking time bomb. If you keep treating people like animals, people will lash out."

"I don't want to see people dying, otherwise I would go back to Syria" 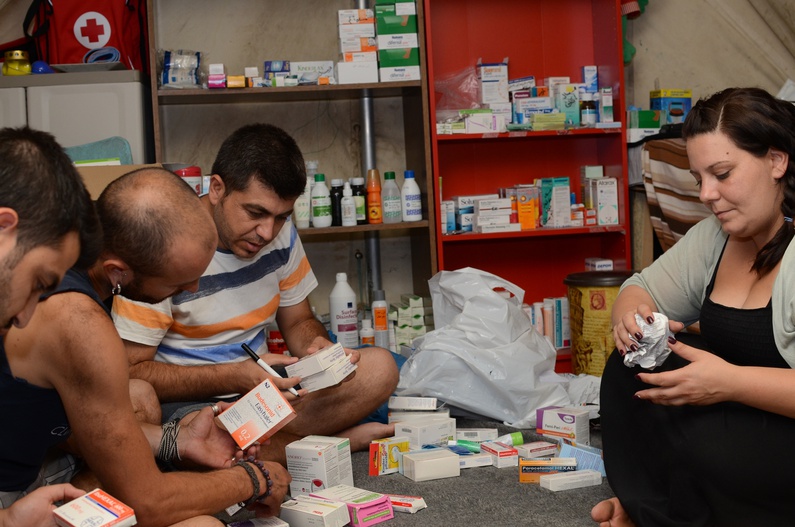 Due to the constant stream of new arrivals looking for medical care or advice, Hassan's tent is terribly overcrowded. "I only give them a day's worth of medicine," says Hassan. "Otherwise the tablets will end up being sold on the black market..." During a brief moment of respite, he shows us photos from his operations in Aleppo: pictures of dust-covered bodies in the streets, the bodies of children. A woman in an ambulance; her body covered in a wool blanket, her palid, serene face tainted by two streaks of blood. "I don't sleep more than two or three hours a night," says Hassan. "I relive moments from the camp on a daily basis. The images appear again and again before my eyes. The traumatic memories were bad enough, I couldn't deal with the fights on top of the trauma. I don't want to see people die otherwise I would go back to Syria."

Faced with this dilemma, many do turn and go back. "They take the Syrian route via Bulgaria, then Turkey," says Tutton. Smugglers take the same route. Ali Maleki from Isfahn has no intention of going back. He has already crossed the forbidden Macedonian border. Alone and on foot. "It was the worst experience of my life", explains the 26-year-old. "I had to hide from the police and feed myself with whatever was growing on the trees". His journey was cut short at the Serbian border. "They caught me. In prison, we were often beaten." He points to a huge swelling on the back of his head. Then he was deported. "As I was passing through the border gate, they stopped me." He was sent to another camp, but on the way there he managed to escape from the Greek police. He has lived in the park ever since, explains Ali. In the open space at the edge of Thessaloniki city centre, dozens of families have settled. They spend their days and nights there. 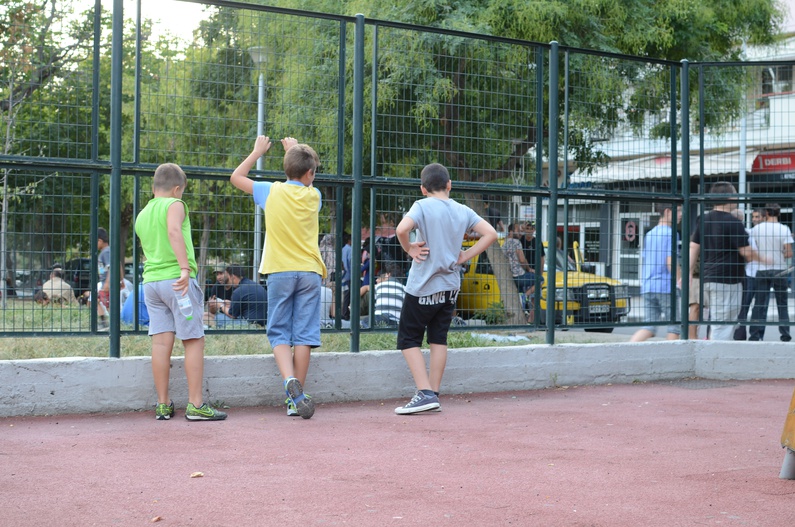 "We are waiting for the call," says Mina. With her partner, brothers, parents and grandparents, the 19-year-old Afghan sits on the barren concrete ground, surrounded by large suitcases. "We want to go to Germany," she explains. It costs 1,000 euros to travel from the Greek border to Serbia. "There are smugglers in Athens," says Mina. Half of the cost of travel has already been paid to the smugglers. The rest will be paid upon arrival.

In the spring, her family fled from Afghanistan. "Our province of Maidan Wardak had been taken over by the Taliban." Her father used to deliver fuel, but he was abducted, threatened and then his business was sold. "If you work again for the Americans, we will kill your children," was the threat from a Taliban soldier that finally made the family leave the country.

"Europeans always think that we come for economic reasons. But that is nonsense". Mina straightens her headscarf. "We used to own a house, land and animals, but everything was sold. I watched bombs be detonated right in front of my eyes, more than once". Mina and her family took a plane from to Teheran and then smugglers brought the family from  Turkey to Lesbos. "All of the smugglers were Turks," she says. "Turkey didn't try to stop refugees. It was at the Macedonian borders where our journeys came to an end." 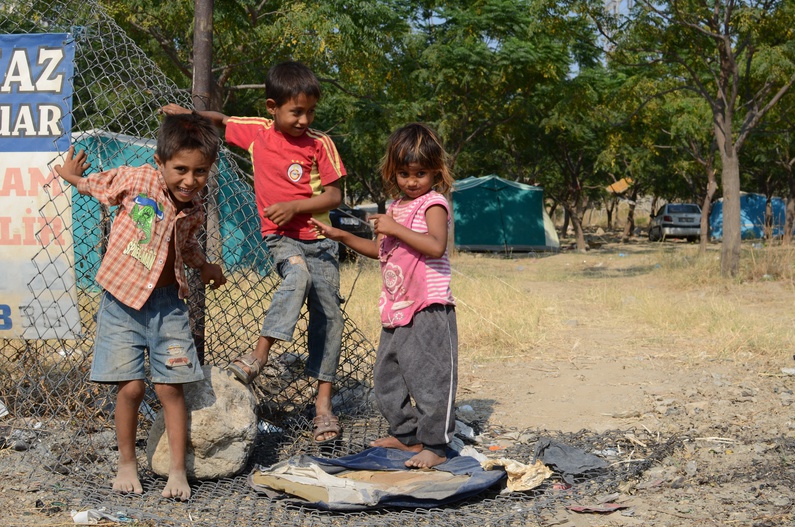 37-year-old Rasuk* has a similar story. Four weeks earlier, he travelled from Turkish Cesme to Chios island on an inflatable boat. "Nobody tried to stop us. The Turks stop perhaps one boat every month, but it's all for the media - it's as simple as that," he explains. The evening sun has settled on the medieval fortress, the main tourist attraction on the opposite side of the street. Under the shadows of the houses, there are small tents and temporary, makeshift shelters for refugees, who are stranded on the island - among them: Syrians, Palestinians, Kurds, Algerians. Tourists still come to this little corner of paradise for their holidays. But there have been fewer of them since the island became home to refugees.

Rasuk has other problems. His voice trembles as he speaks. It takes five seconds or so for him to vocalise the first syllable of his sentence. "It's one of the side effects of working for IS," he says. His arms are covered in ancient, Babylonian symbols. He sits down at a makeshift table with other men. "I worked for the regime, on the Assad communication team," he says. It was a satirical video which attacked Islamists, made in his free time that was his downfall. "Daesh captured me and tortured me. If I had stayed any longer..." Rasuk puts a finger to his throat. He doesn't really feel safe on Chios island. "I am the only atheist here".  He suddenly becomes upset, his long beard shaking with anger. According to Islam, apostasy, the renunciation of faith, is punishable by death. But here, they are all in the same boat. Men talk about their lives in the streets, survival, crime, abduction of children, acknowledging that suicide does happen among the refugee community.

Ali, an Iranian refugee, spends all of his time in Thessaloniki park. He sees families come and go. He patiently awaits his chance to cross the border and establish a new life elsewhere. In the meantime, he helps aid organisations whenever he can, translating for them, distributing rations. "If I see someone in distress, I talk to them and try to lift their spirits. There is no point in being sad and distressed, it only makes life more difficult." When the topic of conversation turns to migrant policy, Ali doesn't hesitate to make his opinions known: "Germany did the right thing last year." Now, however, things have changed. Other countries are no longer accepting as many refugees.

"Europeans should come here and see for themselves just how we live here, to open their eyes to the plight of our suffering".

*Rasuk's name has been changed to protect his identity.