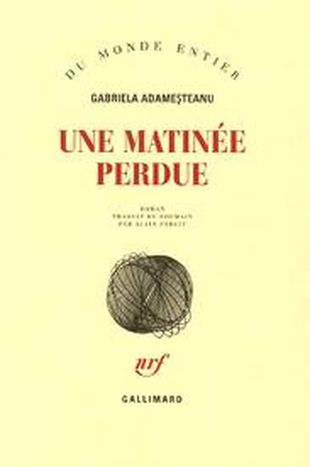 By Luiza Cosma Cafebabel's Luiza Cosma went to Passa Porta to speak to one of the most acclaimed contemporary Romanian writers. Gabriela Adamesteanu has had two novels translated into several languages, and has been extremely well received at international level. A novelist who resisted communist censorship who is also, or perhaps, above all, a mother.

It was the morning of October 23rd when I prepared myself to meet Gabriela Adamesteanu. An unexpectedly sunny, cold autumn Sunday morning, the only day in the week when I prefer indoor comfort to outside activity. Nervous thoughts about this encounter had started nagging me some days before. I was constantly reminded of this lady's reputation as "one of the most prominent contemporary Romanian writers", title which confronted me, a "nobody" living in Brussels. Of course, my Romanian origin increased the feeling of nervousness. I was thinking I was about to meet someone so famous "at home" (though not only there!), whose captivating style of writing raised my curiosity about a world that I had, up to the moment of discovering her novels, kept at arm's length: the contemporary history of my country.

I had met Gabriela Adamesteanu through her most famous novels: Wasted Morning and Provisionality.

I am not an "avid reader", but once I came across these two novels, I became one. For lucky French speakers, the former had been translated into French and published by Gallimard in 2005, under the title of Une Matinée Perdue. The other book of hers translated into French is Vienne le jour (The Equal Way of Every Day) that I'm looking forward to discovering with the same feeling of anticipation I had about meeting its author.

Two Romanians meeting in Brussels... Had I known I had the chance to meet her somewhere in Romania, I wouldn't have been so keen on the idea, probably. But at 3.000 km far from home, the word "Romanian" suddenly receives a sweet, soft meaning, smelling of sponge cake, stuffed cabbage, plum brandy and virtually of anything you miss about your country. I went to this literary rendez-vous anticipating a genuine Romanian feeling, and my anticipation was fed beyond its expectations. Apart from the Romanian food generously home-cooked by one of the participants, the real Romanianness came from the stories Gabriela told when answered questions from the moderator, Mr Achmy Halley, the director of Villa Marguerite Yourcenar, on the occasion of a literary brunch at the Passa Porta library.

I knew from her novels that Gabriela was preoccupied with history; the history of the Romanian people. She lived the worst part of it, the communism. She told the audience stories of her childhood communist memories instilling in us a feeling of "deja-vu". Either because we remembered reading about them in her books, or because we also lived them. And anyone who is older than 30 has communist memories. The atmosphere of those dark years is very well captured in her most recent novel, Provisionality, awarded with the prize of the literary magazine Observatorul Cultural, while it was shortlisted for a prize from the Writers Union of and the prize of the magazine Romania Literara, all of these being prestigious cultural brands in Romania.

She did not want to dedicate her life to writing, therefore she took the time for a family. As a result, there have been big pauses between her novels. Writing well enough to receive international acclaim and recognition is not easy for a young mother, let alone finding a balance between "communist righteousness" in order to see its books published, and the commitment to her literary credo, the strive for truth. It is so the more her merit to have been invited to this Brunch littéraire as "one of the leading literary figures of the contemporary Romanian literature".