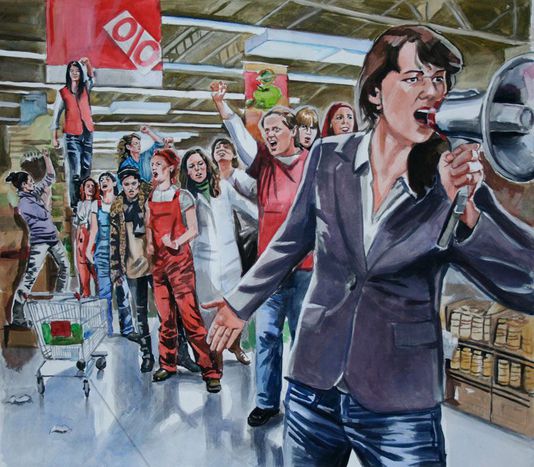 Being a gay friendly, feminist, revolutionary choir is no easy job in Zagreb. Le Zbor try all the same to raise awareness through singing, in a country that is becoming more and more radicalised as it enters the EU in 2013. These women are asserting themselves, towards, and against everything

Around ten young women quicken their pace at the steps of the Pogon cultural centre in the heart of Zagreb. It is a Sunday afternoon and the young women of Le Zbor- an amateur choir who have become a real musical attraction on the Croatian scene - are meeting up for a very important rehearsal. It is the final stint before their concert on the local Studentski radio station, where they have been invited to interpret five songs of their choice for a special programme dedicated to anti-homophobia day.

Formed in 2005, the name of the choir is first and foremost a play on words: the article 'le' is borrowed from the French language, whilst 'Zbor' is the Craotian word for choir. In the Croatian language, it also has another meaning – Lézbor - meaning lesbian. Nina, who is one of the first to arrive at the rehearsal this afternoon, is in her thirties and has a large crest of hair. 'We say that we are lesbians and feminists, but we are also a diverse choir because we accept all kinds of people within our rankings: gays, straights, young people and older people, even men!' she says.

Lea is running late. As the spokesperson for the group, the trainee sociologist explains that she has not been able to avoid confrontation with some people who are involved in a citizen’s initiative 'in the name of family'. These citizens have been collecting signatures at a stand in the centre of the Croatian capital, in order to obtain a referendum to define marriage as being 'between a man and a woman'. 'Since France legalised gay marriage (in spring 2013 - ed), certain people in Croatia want to assure that all of our such plans are annihilated,' she says, overwhelmed. Worryingly, this movement is increasingly supported by Croatian public personalities.

'My boyfriend is gay'

In the choir, the point of discussing ideas often precedes over the actual singing. Gloria, the hippie leader of the group and a comparative literature graduate in her thirties, doesn’t agree with this. There is still a lot to do before the performance, and time is short. If the group cannot sing, neither they nor their message will be credible in front of the public. 'People will like the song first, then perhaps later they will start to think about the message,' she explains.

Sat in a semi-circle, the women quickly agree on their repertoire. They will begin with a remake of Rijecke picke ('the Cats of Rijeka), a song by the controversial Croatian band Let 3. Then they will follow up with Moj dečko je gej ('My Boyfriend is Gay') by Lollobrigida, a local pop and trash group. This will be followed by a popular love song to finish with their revolutionary - or even audacious - repertoire. Since its independence, Croatia has been throwing up everything that has anything to do with its ancient regime. Another intrepid variant is the stage. After having been witness to the police’s inability to protect the first gay pride procession in 2011 in Split, the group decided to represent themselves by wearing uniforms which were evocative of those of the riot police, but with one small difference: they brandished a banana under their waistbands instead of a gun. 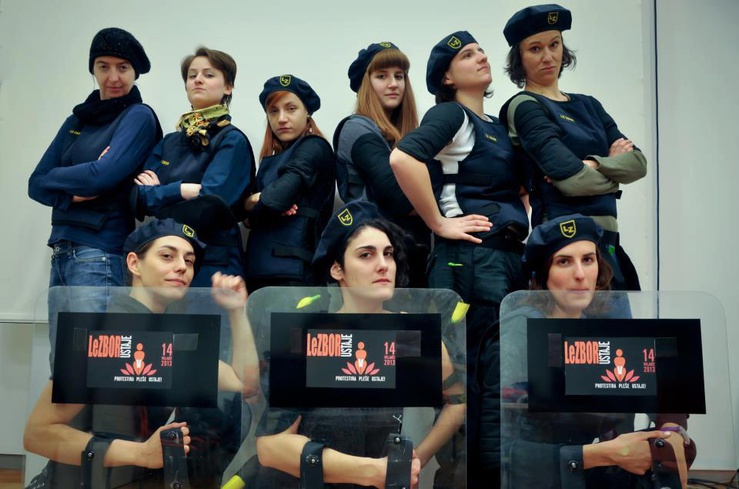 On 27 May 2012, Croatia saw its first protest calling for equal marriage. As a sign of allegiance to the European union, which Croatia joined as its 28th official member state on 1 July, the government has also adopted a set of secular measures, such as the establishment of a sex education programme in primary and secondary schools. However, the archbishop of Zagreb did not hesitate to slap the state’s highest representatives on the wrist, creating an avalanche of homophobic remarks across the country. These comments are becoming more commonplace despite the growing number of radical groups who do not hesitate to use force.

To show their discontentment, Le Zbor featured at an event named 'love your neighbor', which was organised by Zagrab pride. The event started off as fairly easy-going, yet ended up taking a turn for the worst. 'We found ourselves surrounded by hooligans dressed in black, who were holding their fists up and shouting 'death to fags!' In the end, the police put us in the back of some vans and took us to somewhere safer,' says Lea. 'It was the first time that I’ve found myself in a salad basket!' Nina adds jokingly. But for Tea, a young student who has just moved to Zagreb, there was nothing funny about the situation. 'I come from Rijeka, a seaside town which is quite tolerant. I’d never seen anything like it, having people spit in your face just because you’re different.'

Other side of the battle

The group is not just limited to speaking up in the name of all things 'lesbian', 'feminist' or 'revolutionary'. They also participate in other prickly issues, whether it be for textile workers or air hostesses for Croatia Airlines. The point is to be a part of all of the battles which are worth being faught. It is a commitment which requires a lot of time and money.

The girls have had to produce their first album Hrvatske budnice ('Croatian patriotic songs'), which was released in 2012, by themselves. They all say that it is worth it, especially when they manage to reach an audience that isn’t really 'theirs'. 'When we go onstage as a lesbian and feminist choir who are going to sing a revolutionary repertoire, some are scared, and others are curious,' says Lea. 'We are there, with our music, to break down prejudices. Art has this ability to bring people closer in a direct way to subjects that they had ignored completely.'