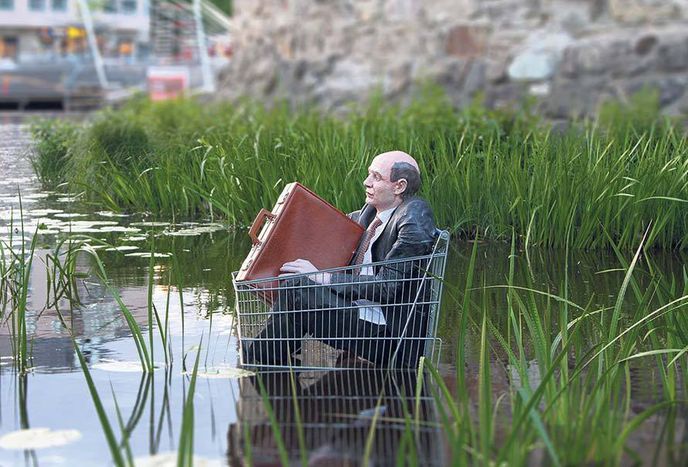 Latvia and the refugees

Some time ago I was in Riga with a colleague. When we arrived she said she didn't like traffic and confusion. I really didn't understand what she meant, I have never seen such a quite capital.

Latvia is depopulated. Official data say they are more than 2 millions, but they are quite less. Last year the demographic decline signed -14% (source Internazionale). This country is a forest. Nice, green, distressing.

Many youngsters are in UK, Belgium, Netherlands or Ireland. They look for opportunities they know they will not find here. After studies and commitment they don't want to work for few euros per hour without using their knowledge. The minimum wage is 2,50 euro per hour. One big kebab is 4,30 euro. It doesn't add up.

Despite the demographic decline Latvians don't want migrants. When the government signed a document with European Union to host some hundreds refugees the protest started. Wicked, only today in Italy arrived more than 1000 refugees.

They are afraid of foreigners, not by wickedness but by ingorance. Xenophobia and the fear of possible "invasions" from the Russian border, where they have recently built a wall, are meaningless. Meeting people from other ethnicities is quite rare, making a comparison with Western European countries would have no sense. The only city of the country is Riga and, despite many Latvians describe it as big and international, it's smaller than Turin, Marseille or Manchester. The second city on size is Daugavpils, with 80.000 inhabitants is smaller than Udine.

This is also true for small Latvian centers. My town, Rezekne, without the influx of young participants in European Exchanges such as Erasmus+ would not host foreigners. We are in this situation because there is no job and there are no social and cultural conditions for an adequate reception.

Here you have the turning point: the relationship between Latvians and refugees.

In Riga, precisely in Cinnamon Hostel, I met Mohammed (fantasy name), one of the very few afghan refugees in Latvia. As soon as he discovered I was Italian he started asking me about everything. Suddenly I didn't know if I was interviewing him or if he was interviewing me.

"I've been living in Rome for years, but I'm from Turin" I tell him

He says "Wonderful Turin. I like Italy, especially the north. You have job, public health and many refugees from the Islamic world. Here it's not like this. From Afghanistan we are just eight, without real chances to find a job. We live thanks to European Union subsidies. But I want to leave this country. I've been living in this hostel for months, I'm just waiting for papers to leave Latvia. We are in Schengen Area, I'm free to travel around the continent"

"Except the work what you don't like about Latvia?"

He smiles "The weather is awful. Too cold. People look at you in a weird way, they are not used to see many foreigners. The language is incomprehensible. I would like to study English,  French or Italian, not Latvian. But I was unfortunate and they brought me here. This is a country which doesn't know how to take care of his citizens, what can they do for us?"

"If you could leave Latvia today where would you go?"

"I have a friend in Brescia, very nice city. He was also in Latvia, but as soon as he got sick he left the country. Some other guys told him to go to Italy. There he had surgery for free, here it was really expensive and he didn't have money. Then he found a job and he never came back. He speaks Afghan and Arabic everyday and he spends his summer holidays in Liguria. He is a real Italian now, because integration there is not impossible like here"

This chat left me a bitter-sweet taste in my mouth.

From one hand touching the reality of migrants is not easy, from the other see my country so praised was impressing, especially knowing that many youngsters are leaving it. Maybe it brought me some trust, it gave me the urge to find positive solutions to stop the exodus of my compatriots.