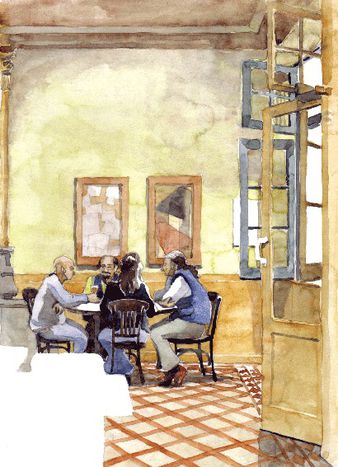 Two side-hung doors nimbly open in La Violeta, a spacious bar where the neighbours from Gracia often go. A filthy shade spreads over from the floor to the roof, covering on its way the plastic tables and the slender columns with capitals that give rhythm to the room.

Only the fire extinguisher and Estrella’s logo (one of the most known Catalan beers) brighten up the spacious dimly lit room with a touch of red. It’s been two weeks since I witnessed this daily and practised performance for the first time. Day after day, the regular costumers play their role in this banal scene again and again, with a Swiss clockwork precision.

Striding purposely, the motor-cyclist with a dark blue suit starts the dancing at a quarter to six. He keeps his back straight as he walks to his stool at the end of the bar. Before he can order anything, he has already got a small brown bottle on his lips. A man who was reading the newspaper at the other end of the bar, and who was like waiting for the starting signal to be given, moves away silently.

La Violeta comes to life. At half past six, the select group of post officers takes a seat around the round table. With a rag on his hand, the cheerful owner of the bar takes part in the lively conversation. The bar fills up with long-haired youngsters who slovenly throw their jackets and roll up the cigarettes with a stance of indifference.

The pot-bellied writer takes some liberties. Being neither a civil servant nor a worker he can make his entrance at any time. He leaves his heavy books apart and comes out from a cloud of smoke to order a black coffee. Then, he keeps stroking his beard with a podgy hand for hours while he listens to himself.

In this scenery, where I also have an assigned position, there are some silhouettes whose faces I will never see. From time to time, the owner has a quick look at my drawings. I usually meet his wife at the market. And when I go back to La Violeta I already know that before six o’clock the motor-cyclist is going to come in striding purposely.

Text written by Géraldine Garçon, French artist who lives in Barcelona and makes artistic works about the daily life of the cities she lives in. Translation by Montse Nualart