Based on texts by Helen von Druskowitz and Virginie Despentes, Cléo Mieulet read, in French and German, texts by two authors which address the topic of Femininity (die Weiblichkeit) and Gender Studies. With almost one hundred years separating both writers, the importance of these two women for this discussion is of great relevance. 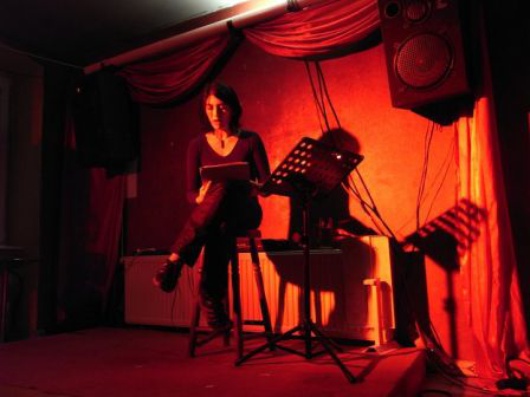 Virgine Despentes, winner of the Prix Renaudot in 2010 for Apocalypse Bébé, normally writes about the forgotten women that don´t fit in the cage of the feminine: bad girls with violent attitudes, “ugly” women not mirrored by the everyday images of beauty. Helene von Druskowitz, born in 1856, the second women to obtain a Doctorate in philosophy, the first Austrian woman, criticized religion, sexism, the gender inequality and is a reference for Gay and Lesbian History.

The reading switched from one language to the other with such great fluidity that it made the change almost undetectable. Of course, this true Babelian experience is always possible when there is one common language and that was, the portrait of a woman as written by a woman. The bet maide by La Ménagerie, of connecting people despite their natural language, through theatre, but also bringing other kinds of performances to the second edition of this scenic arts festival is a winning bet.

The confrontation between different roles attributed to man and women, based on expected levels of sensitivity, strength or emotional behavior are as valid in Druskowitz as they are today. That is what makes a classic, isn’t it?