by Sandro Marques Re-Belle, taken to stage by Compagnie Qui Vive directed by Aline Steiner and performed on stage by Patricia Bakalack, was the first of two guest companies to perform on this year’s edition of the “Festival des arts de la scène francophone” produced by La Ménagerie.

The effort to invite companies from outside of Berlin’s scene was another step forward in this year’s edition.

Qui Vive comes from Paris and Mobile Homme Théâtre which performed Saturday, 28 comes from Nîmes, in southern France. Taken to stage at ACUD, the theater house was once more full. The subtitles may have helped the German speaking audience. It was a diverse audience, both in origin and age, just as Berlin is. 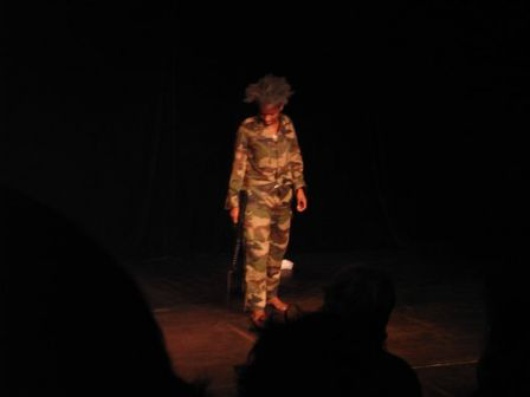 Re-Belle tells the story of a child soldier, which became part of an army at the age of 12, as far as the child can remember. Starting with a soft song, the kind of music that children listen to, Vipèr plays on the ground and slowly, from different stripes of clothes makes her own wrap doll. This in itself is a symbol for what the play is all about.

In its current form, Re-Belle was premiered during this year’s Festival. In this monologue Patricia Bakalack superbly went through as many transformations as a child that becomes a soldier, a soldier that becomes a woman, a woman that becomes a refuge, and as one can only try to imagine. The ranges of psychological beings that such a person has to live with are amazingly performed on stage by the actress.

If we think that such diverse characters are all embodied in one child’s memories we can probably grasp a bit of the trauma this reality constitutes. The silence and immobility from the spectator’s part may be a sign that this time the reality was stronger than theater. At a point, there is a reference to the metamorphosis that a butterfly goes through, from caterpillars into marvelous winged beauties. Vipèr’s metamorphosis is at the reverse pace: From child into a soldier. Vipèr c’est pas Belle elle est Re-Belle.