Germany's biggest tabloid, the BILD, is read by millions everyday – and teaches its readers to look at women for their bums and boobs alone. Kristina Lunz couldn't take this sexism any longer, so she created her own campaign against the magazine's sexism: StopBildSexism.

Outside, temperatures are freezing – a typical winter's day in Berlin. Across the street, beyond the café windows, we see a multi-storey building – the headquarters of the Axel Springer media empire. Kristina Lunz is fighting this empire, specifically its best known product.

"I grew up without worries and didn't have the feeling of being disadvantaged by my sex," she says as she takes a sip of her Spezi (a mix of coke and lemonade). Grinning, she adds: "I've always had a pretty big mouth, though."

And a big mouth is what you need to be to become one of Germany's most famous activists in little to no time at all. The 26-year-old Oxford graduate's petition BILD: Portray men & women equally - end sexism in Europe's biggest newspaper! has already found more than 57,200 supporters, and several media outlets have covered the StopBildSexism campaign. But how did carefree Kristina turn into an assertive fighter, taking on BILD, the biggest German tabloid with a print run of 1.87 million?

Kristina first became aware of the problem at the beginning of 2013, when an article about German politician Rainer Büderle's sexist remarks to female journalists sparked a public outcry in Germany, and everyday sexism became a prevailing topic.

"I honestly hadn't thought that much about it before," Kristina confesses. But during her studies of Global Governance and Diplomacy in London she stumbled upon the subject of women's rights again and again. She gradually learned how the media works, what effects it has, and how to use political campaigns in media.

The vague feeling that haunted Kristina ever since said outcry, began to turn into assuredness: "Something doesn't fit. Around the world women suffer so much violence, but in media coverage they usually only feature as sex objects. You need to get aware of the fact that this kind of portrayal has an effect." 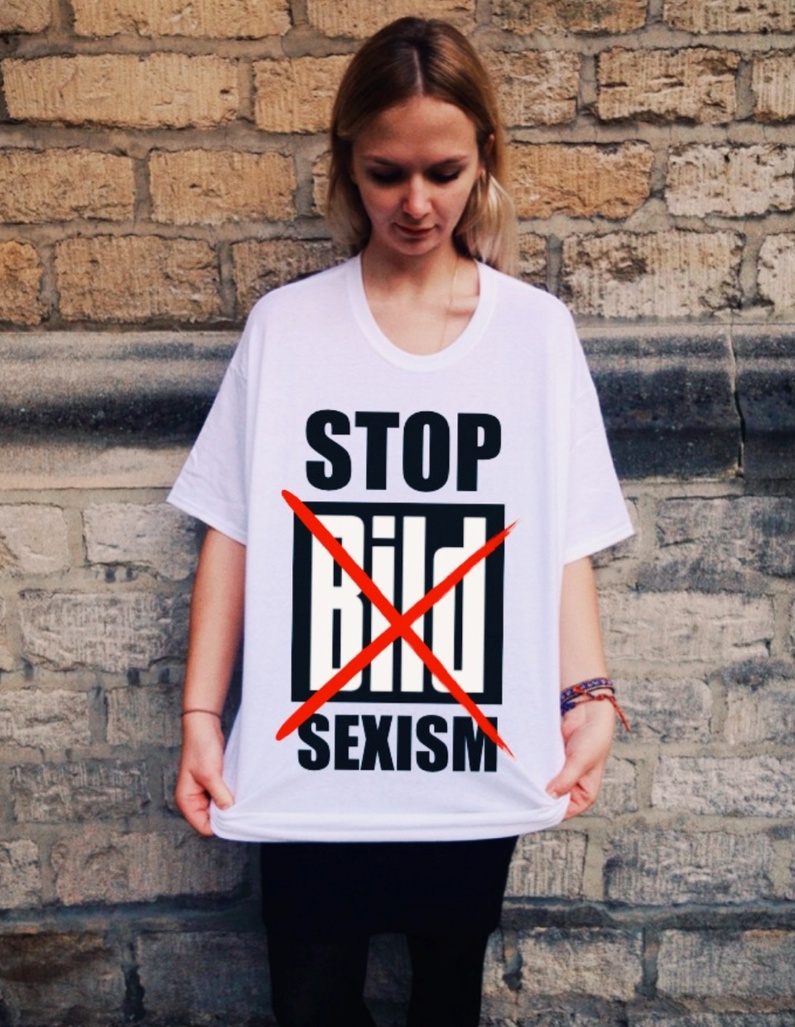 The final trigger came on a visit to her German home. At a petrol station Kristina spotted the headline of the BILD: "BILD are looking for the best boobs on TV!" She knew something needed to happen. But what?

Kristina laughs: "I had absolutely no idea about anything! But from England I knew about the No more Page 3 campaign, and I thought that someone should do the same thing in Germany."

So Kristina typed up a text for a campaign against the BILD, especially against the ever younger and more revealing BILD-Girl. Then things started to happen at a pace. Big media began reporting on StopBildSexism, and even Kai Diekmann, then chief editor of the tabloid, reacted. Kristina grimaces: "Of course he mocked me relentlessly. I mean, I only had 11 followers on Twitter!"

"You just need to get laid!"

Despite few followers, a "terrible website" and her learn-by-doing approach, the petition got 8000 signatures in three days. Kristina's mailbox filled up with hate mail: "See a psychiatrist!" or "You just need to get laid!"

So much hate was unexpected for Kristina: "The petition seems stupid to someone – okay. But so many people attacking me personally, commenting on my looks – it got to the point where I could only cry."

Kristina shrugs. Today she can better manage these messages, also because in the meantime she collected a StopBILDSexism team of 19 dedicated supporters – both male and female. Some of them live in London, like Kristina, some in Berlin or elsewhere. Together they stubbornly fight the omnipresent sexism in the BILD. Kristina is convinced, it is this sexism that is telling readers that it's normal to reduce women to their looks and sexuality, contributing to every-day sexism and a lack of respect towards women.

First milestone: getting rid of the BILD-Girl

StopBildSexism has, among other things, written an open letter to now ex-editor-in-chief Kai Diekmann and organised a round table about sexism in the media. Their first interim goal remains the abolition of the BILD-Girl.

"It's pretty ambitious," Kristina admits, "but you have to start somewhere." Kristina takes her leave, she has another appointment across the street: at the BILD Headquarters. The BILD guys don't take her seriously, she says. But things are different with Marion Horn, editor-in-chief of BILD am Sonntag (Sunday edition) and the female BILD editors. The upshot: a big mouth can go a long way in the fight against sexism in media.

Mind the gap presents #Sheroes, a series of portraits about young Europeans who advocate gender equality and campaign against discrimination.

Mind the gap: Changing the conversation about gender equality