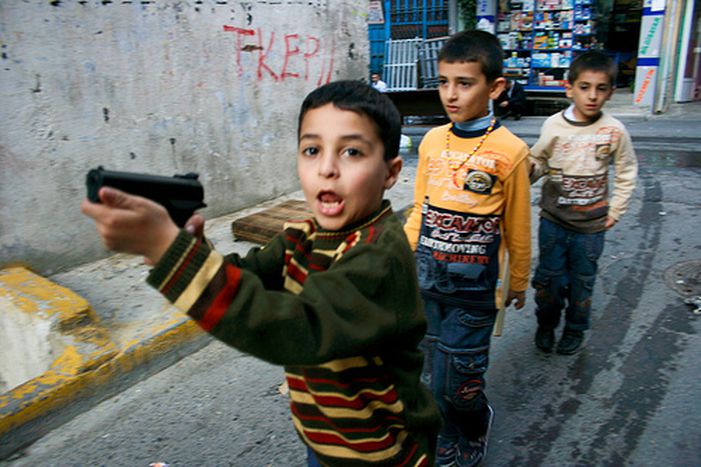 It is the refusal of the government in Ankara to make the inhabitants get on with each other which ends up in their refusal to integrate in Balat, the Kurdish-Armenian district of Istanbul

The pistol is aimed at me. It follows, it never drops. I hear the click of the trigger and the burst of bullets reach me immediately. I do not react, I remain still and with one eye on the lense of the camera I continue to take pictures. It's not an Al-Qaida militiaman who is opposite me but a child with a toy gun. Nor am I in the streets of Gaza City or the suburbs of Baghdad, but just a few steps from Taksim Square - the commercial heart of Istanbul. 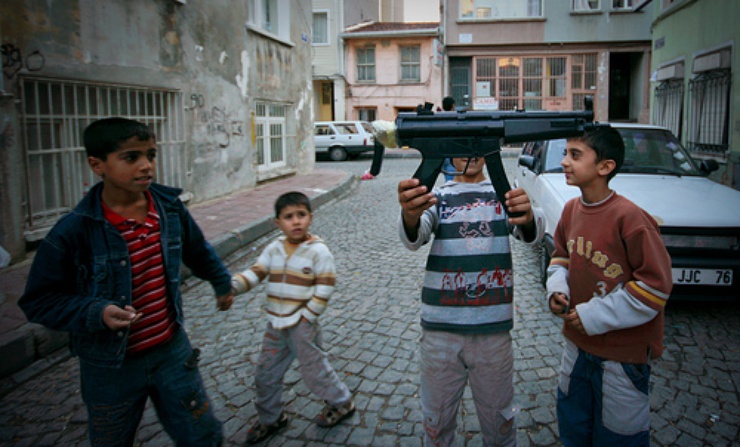 For some years Istanbul has been making itself known as one of the most dynamic cities in Europe. Just like Paris, London or Rome it has become a tourist destination capable of attracting foreigners from all parts of Europe. The rapid economic development of Turkey, of which Istanbul is the privileged showcase, has added glamour and international fascination to the centre of its towns. In Istanbul I bump into Kaan, a friend from university who lives and works in the city. I ask him to take me away from the city centre. I explain to him that I came in order to look for stories of the city which were different to the usual tales and photographs and for this I am looking for the real heart of Istanbul. 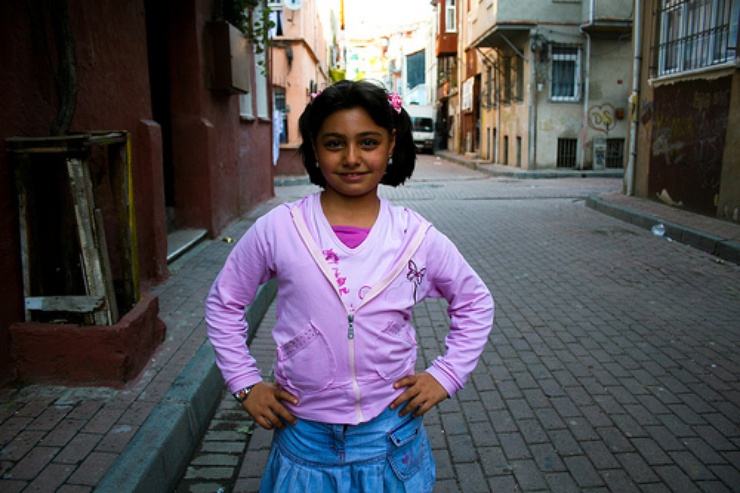 Kaan does not hesitate. In a few moments we have left Taksim Square and past the façade of the Turkish economic miracle the scene changes. Hundreds of piles of rubbish thrown from windows Balat is the Kurdish-Armenian district of Istanbul. 'Here there are many Kurdish and Armenian immigrants who come from the poorest areas in Turkey,' Kaan tells me. 'It was the main Armenian district until the seventies,' continues my friend, showing me the seat of the scholastic Institute for Armenian language. 'Then the Kurds arrived from the south-east regions of the country.' The roads are in a sorry state and full of rubbish. Despite the neglected appearance the streets are full of people. I ask Kaan for more information about the hundreds of piles of rubbish thrown out of the windows.

'It is their way of rebelling against authority,' Kaan explains, smiling. 'They refute the authority of the government in Ankara and prefer to live amongst the decline and desertion in their own districts rather than come to an agreement over the attempts at integration which were promised by the government.' Urban and social decline procede on equal footing in these streets. Unemployment and the scholastic desertion are only two of the problems which the Kurdish community faces every day. It is the children who immediately affect me. A chaotic and deafening crowd of little kids assails me from every corner of the district. 'Many of the children that you see are illiterate, their parents do not send them to school and prefer to keep them at home rather than place their trust in the Turkish public institution,' continues Kaan. 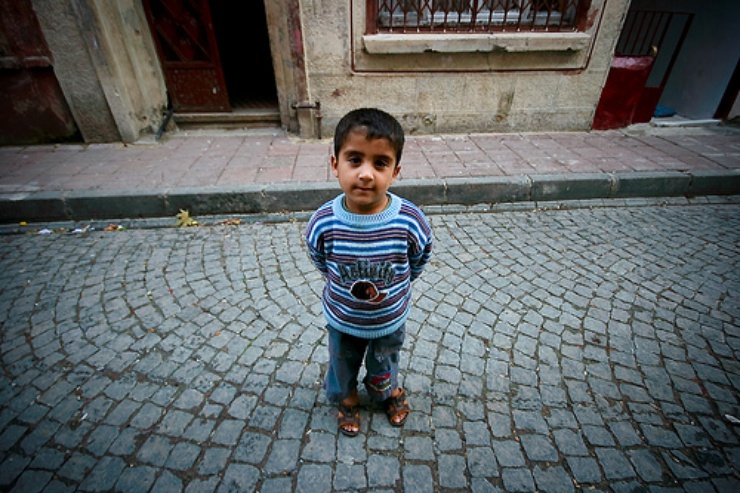 The thing which leaves the biggest impression on me about these children is their familiarity with guns. Certainly every little boy has played 'war' from a young age, mimicking the adults that they see in American films. But the children of Balat do not do this. Their pistols do not have the light and the gleaming colours of toy pistols that I was used to. They do not have any child-like innocence. Their pistols are true replicas of real weapons. And they fire! My camera immediately makes them curious. In short, I become the object of attention until I become the target. 'Those that you see are only copies of weapons that many of their parents actually posses at home,' Kaan tells me. 'Rather than play football or ride a bike, they prefer to emulate the behaviour of those around them. The Kurdish community from the poorest areas in Turkey is full of traditional values. The idea that men from a very young age must show a certain masculinity is fundamental.'

It is not only the Kurdish community which behaves like this, confining themselves to one particular area and refusing every possibility of integration which the government in Ankara promotes. In the heart of the city they hide districts like Tarlabasi or Kasim Pasha where thousands of Roma and Armenian people live in very similar conditions, where crumbling houses and social and urban decline are the norm. It is clear that further than the economy, the Turkish government must improve other aspects of their country before presenting themselves to the EU as a possible future member state.