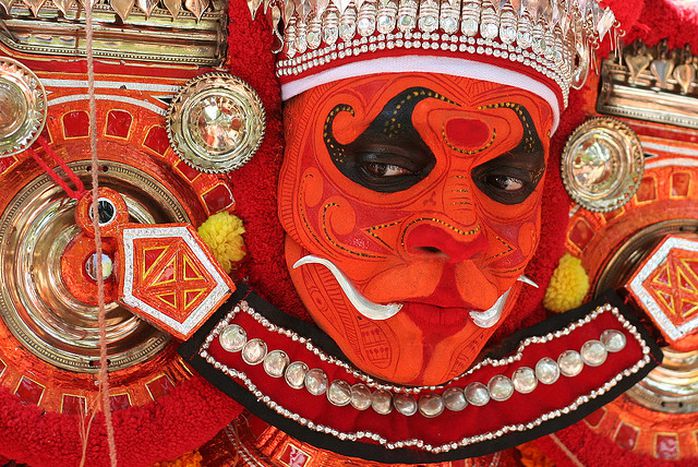 Kerala: Of Black Magic and Other Vagaries

Crying infants, wrinkled grannies, a stubborn goat, three hens, ten young men on drums, an old man with a terrible singing voice and a troupe of young actors: After driving along bumpy country roads for several hours, our destination – a tiny village in the North of Kerala – doesn't seem much to look at and could be hardly described as more than three houses with a spacious backyard.

Everyone here seems to be related and not used to meeting foreigners. Baffled by the fact that a white girl has found her way to their village festival, the host family immediately invites me to dinner. As everywhere in the South, rice with coconut, okra and tamarind sauce are served on a banana leaf and eaten with our fingers. “This kind of ceremony is very special, it doesn't happen every day”, says Gautham, director of the Sarang Hills School where I am taking Hindi classes. And indeed, the ceremony that I thought would be a mere village festival, turns out to be far wilder than I expected. Although everyone here is Hindu, the rituals that will be performed tonight are more closely related to black magic than to incense brandishing Bhramins. As I try to get a better look at the place, I realize that the two house altars, decorated with about twenty black stone slabs are quite unusual. “Those are the snake deities that the village people worship”, Gautham explains. “According to local legend, the ancestors of this family brought the deities back from a trip into the mountains where snakes are the centre of the animistic faith of nomadic tribals.” 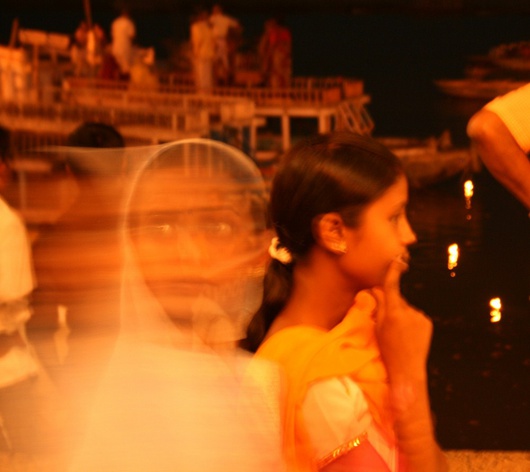 In the meantime, utter darkness has descended upon the jungle around the little village, now filled with strange sounds and voices. In the background, a group of young men has been drumming for hours while a skinny old man is singing songs in Malayalam, the language of Kerala. What sounds like ear-numbing croaking to me is a detailed reinterpretation of the legend of the snake deities' arrival in the village, Gautham translates for me. “Their rituals are an eclectic mix of animistic tribal traditions and Hindu ceremonies. But most of the local people don't know how to properly conduct those rituals any more. That's why they contracted a company of actors and magicians.” While I am still trying to make sense of this religious money making in the mother country of spirituality, a couple of young Keralites gather in front of the smaller altar and start putting on their costumes.

Most of the actors-cum-priests wear hardly more than faded orange dhotis (a large piece of cloth that is tied around the waist), which is the common attire for males in South India. After some aimless running around, they finally drag a slightly bigger young man in front of the altar and adorn him with a colourful skirt, bracelets and anklets with little bells and an elaborate headdress. “That is Ranjeet, who will be possessed by the deity during the ceremony”, explains Gautham. Ranjeet's red raffia skirt looks almost African and reminds me of costumes I have already seen in other villages in the North of Kerala. During a theyyam ceremony that I attended a few weeks before, costumed dancers had danced, jumped and drummed for hours until going into a trance and blessing the audience in the local deity's stead.

However, Ranjeet doesn't seem too happy with his role: The moment his costume is in order, he hastily disappears into the crowd. While the actors instantly take up the chase, screaming at the top of their voices, two older men start a fire and prepare a bed of red-hot coals. As soon as the fugitive is found, he is dragged to the altar amidst furious howling and jeering. Although Ranjeet's fear is very convincing, I still wonder if he is maybe just another actor. Either way, his next feat is very real. After having danced on the red embers for a couple of seconds, he puffs himself up in front of a cheering audience. 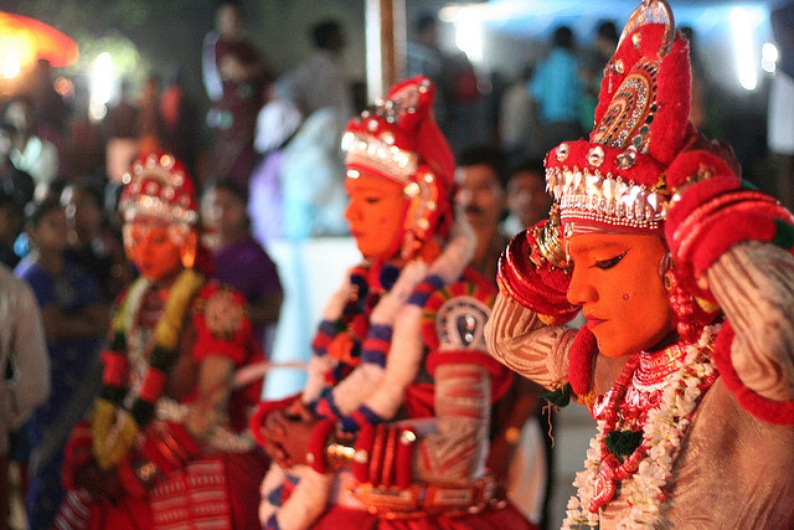 “Now it's the goat's turn”, whispers Gautham who is sitting next to me. Accompanied by the sharp ring of metal bells and low drumming, the nervous animal is led to the altar where it is made short shrift of. Lying on its back with its legs tied up, a small cut across the goat's throat is enough to inundate the whole altar with warm blood. To make sure that every little corner of it is covered in red, the priest kills one of the chickens too. One after the other, the family elders and Ranjeet, who now seems to be fully in trance, slowly assemble in front of the carnage and start their psychic Q&A session with the snake deities. Even minutes after the slaughter, the goat is still rolling its eyes until it finally dies, a last shudder running through its body. The onlooking young Keralites couldn't be more pleased and immediately start clamouring for a goat's meat curry. While a new feast is being cooked up, the troupe of actors has begun to sing even racier songs and prepared more colourful masks and costumes. As soon as Ranjeet has answered the last question, the women of the village start a set of hypnotically fast dances, throwing their long unfastened hair around, almost sweeping the floor with it. “You should dance with them, so your hair will grow faster”, Gautham jokes. 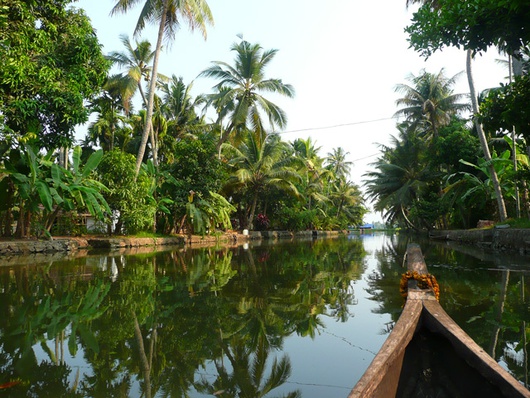 Around 3am, the troupe sets about enacting a traditional play in Malayalam whose plot seems to be largely improvised. As the village people who surround me burst into laughter ever so often, I infer that the play must be very funny indeed. When one of the actors approaches me and says a few sentences in a shrieking voice that causes a general merry racket, I wonder if I should maybe have learnt Malayalam instead of Hindi. Unfortunately, the humour of the dialogues seems to be hardly translatable even for Gautham. “He only made a joke about your skin colour. Most people here have never actually seen a white woman other than on TV.” Hours later, when the last dance has been performed and the drums have been finally put aside, a pale sun rises over the banana trees.

While the whole bloody extent of the ceremonies is revealed in the early morning light, Gautham chats with the father of the host family. “Most people are not happy with the ritual, they think that Ranjeet wasn't really possessed, but was only pretending. So now they want their money back.” Apparently, magical ceremonies are no laughing matter in Kerala, as the two parties enter a legal contract. If the sorcery doesn't work, the magicians are liable. “Another ceremony wouldn't really help though”, laughs Gautham. “According to Hindu mythology, we live in the age of the goddess Kali which is characterised by spiritual decadence. The gods don't visit humans any more to answer all their questions.” It is even likely that this is written down in the small print of the contract – after all, even magic has its laws!