After being beaten in the primary contests of the Green party in France, Karima Delli quickly swallowed her defeat and set out once again to fight a new battle in Brussels. An MEP since 2009, the 37-year-old politician has her own plan to save the continent - and it's an exciting one.

cafébabel: What is Europe's main problem?

Karima Delli: People don't like Europe any more. That's because in the face of great challenges, we have heads of state who aren't up to scratch. Take the refugee crisis - for once, Europe suggested a big resettlement plan, and it was all ruined by Orban and others like him. Plus, Europe no longer sets a good example. Barroso, the former president of the European Commission, has moved to Goldman Sachs. We have a former EU Commissioner, Neelie Kroes, who managed an offshore company. Enough! The lying needs to stop. In my programme, I want to stop the doublespeak between Paris and Brussels. Too many political figures bash Europe while simultaenously benefiting from it. But as for European citizens, when you ask them, they are ready to get involved.

cafébabel: Isn't there also a problem with the European narrative? We're always hearing that everything is going badly.

Karim Delli: We should be careful. We are the generation that needs to revive the European dream. Everyone says that it's complicated. But do you think that it was easy to achieve one week of paid leave in the 1930s? Do you think that those who advocated the abolition of slavery didn't struggle? We need to start dreaming again. You have to fight to achieve things.

Above all, we need to remove the old model of party politics. The first thing to do is to stop talking about new treaties and to set up a constituent assembly. In other words, we need to talk to people and ask them if they have ideas that they would like to bring to the debate. A constituent assembly would mean all of us writing a new treaty, together.

How? We have all the tools to do it, first and foremost the social networks. We could even do it with all 28 countries. We are good at starting citizens' initiatives with online petitions, we could start by uniting around new ideas.

cafébabel: Where should we begin?

Karima Delli: Europe needs to address real problems. It's not normal that we still haven't acted on tax havens. It's not normal that we still haven't managed to introduce a tax on financial transactions. In reality, there are two problems in Europe. Firstly, it's too technocratic. Secondly, there is a lack of standardisation, both social and fiscal. I do a lot of work on social dumping. I campaign for a European minimum wage. But it's a truly enormous battle.

cafébabel: How can we get young people interested in Europe?

Karima Delli: By making them discover it. But that's not enough. Personally, I couldn't take part in the Erasmus programme. Why? Because I couldn't afford it. Erasmus is always for the same people, by which I mean that it's never for those from working-class backgrounds. So first things first - I'd a invent European civic service, straight away!

cafébabel: But that already exists...

Karima Delli: (She bangs her hand on the table)  That's not the same thing, and anyway, who knows about it? Personally, I want to make it compulsory. During your time as a student, you take six months to go and see what's going on elsewhere. And then I'd set a number: every year, we'll send 1 million young people out into Europe, so that they can talk to each other, they can create cohesion, so that they can become the brains of tomorrow. So that we can limit the issue of differences. So that we can avoid those rotten old French debates: national identity, immigration... we'll sweep away all those questions and we'll ask ourselves just one: how can we create a European identity?

At the European Parliament, we have always fought for young people. Straight away, we implemented the youth guarantee, which is a plan allowing all unemployed youths to have an internship, training or quality employment. 6 billion euros were released for that. 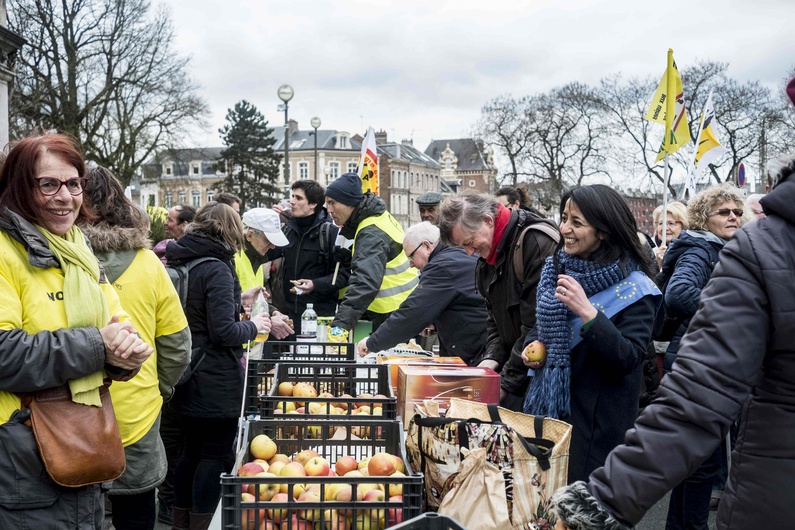 cafébabel: I'll ask you your own question - who knows about that?

Karima Delli: OK, but it works! If you look at the countries that have implemented it, it's working: Finland, Denmark, Germany, Italy ... the problem in France is that there is no communication on the subject. Do you even know France's position on European issues? There is no European debate in France. We have no ministry for that, no advisers. If you want to call someone to negotiate on Europe in France, who do you call? We just have a department of State. But seriously, what does it do? There is never any European debate. What does Merkel do before going to the European Council? She goes to the Bundestag, the German parliament, and talks about Europe, and all the television cameras are there. Even in bars in Germany, at the moment, people are talking about Europe.

cafébabel: How do you explain that?

Karima Delli: There aren't enough media outlets that talk about Europe. I'm sorry, but it really annoys me when someone says they don't know who their MEP is. When there is a debate about Europe, who do we invite? Members of the national parliament who know absolutely nothing, party leaders who are really useless. Where are the MEPs? Among German diplomats, everyone is competing to go to Europe. Here, we send the nobodies, people with baggage. Europe isn't a retirement home, it's much too important for that.

It's up to those who have done an Erasmus to be the ambassadors of Europe. We need to make an effort. I don't understand how we haven't thought of it before. Every time I go to the Parliament, people tell me that France is great, that what we're doing with social housing is fantastic, that our social protections are exemplary, etc. But who's talking about all the good things that we're doing? Nobody.