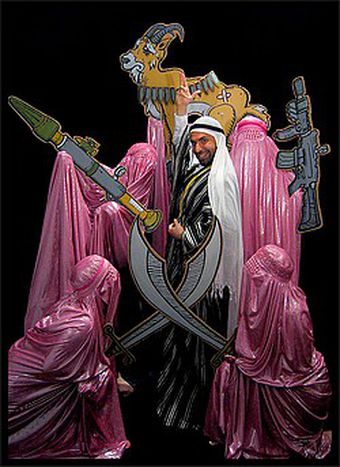 Written by London-born Zoe Samuel, 24, Jihad: the Musical captured the European media's imagination during its three-week run at the Edinburgh Fringe Festival. The Silk Circle Production company aren't the first Americans to toy with musical jihad; the sketches of Rick Crom's off-Broadway NEWSical the musical (2006), are inspired and updated by current affairs, and already featured an all-dancing, all-singing number called 'Jihad Babies'.

Nevertheless, star number 'I Wanna Be Like Osama' received more than 150, 000 hits on YouTube amidst a charge of international press attention. 'There was a flurry of correspondence from Europe,' recalls Anne McMeekin, the festival's press officer. 'Journalists from Sweden and Germany seemed assured that it would be controversial.' 'The responses I received from journalists and public alike, once they had seen Jihad, were positive,' adds Lisa Kingsnorth, press officer for the musical which closed its curtains on 27 August. 'Especially those from Germany – they absolutely loved it!' 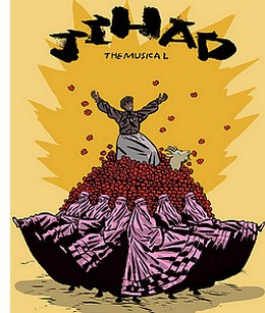 Four or five days into the festival, and we race to discover what Jihad: is all about. We come out slightly disappointed an hour and fifteen minutes later. The show takes place on a small stage on Chambers Street, between the famous Royal Mile (main tourist street) and the little bronze statue of Bobby the dog. Today, it doesn't draw a large crowd, despite having performed to full-houses virtually every night and ended up being ranked one of the top five performing shows at C Venues (showcasing international programme of new work) by the end of its run. The unattractive bare stage with its sole pianist near the audience – in comparison to the massive purple-red inflatable upside-down cow that was the 'Underbelly' venue in the skater landmark of Bristo Square – coupled with the lack of advertising and promotion on Edinburgh's streets, could explain the scant attendance on the day we catch it, early on in the festival.

A town, in the middle of nowhere, Afghanistan. The slightly dim poppy farmer Sayid, played by Brit and old Etonian Benjamin Scheuer, naively voyages to the US in search of a 'better life', cultivating a dream of becoming famous. There, the peasant meets a terrorist cell who try to convince him to sacrifice himself in a huge bombing in the name of Islam. 'Foxy Redstate’, an American reporter more obsessed with make-up and fame than her country's security, and a terrorist who greeds after Osama Bin Laden's cult media following complete the cocktail. Even the French put in a musical appearance, brandishing their baguettes during the franglais number We Turned and Ran.

The performance maintains an ironic tone throughout, but the theatre company don't go as far as they could. The criticism doesn't hurt nor do the songs hit the level that expectation generates. The public enjoy it, and the actors use a lot of imagination to make up for the lack of technical resources (props include cardboard AK47s). I imagine those few Muslim spectators who would leave the performance would be provoked more by boredom than actually taking offence – not a good sign if the show was designed to hit a nerve. Kingsnorth agrees: 'Those who did come realised that it was, in the words of Robert Dawson-Scott, critic for 'The Times' newspaper, about as offensive as 'Fiddler on the Roof'. It was simply an effective, well-rounded satire of terrorism, the West’s somewhat over-zealous security measures and its effects on our freedom.'

'The show took place in Scotland with little outcry,' says McMeekin. 'There was one phone-call from a member of the public who although not irate, thought there would be a good chance it would be questionable.' 'The only people who believed it to be scandalous were those who based their entire opinion on the shows’ title and/or second/third-hand opinion, rather than experiencing the performance first-hand by venturing to see it themselves,' affirms Kingsnorth.

Artistic director Luqman Ali echoes this experience when in December 2005, his London and Luton-based theatre company 'Khayaal' staged The Truth About Your Father. The one-woman suicide bomber play includes a character playing the role of 'Jihad'. 'A couple of people called and asked why we were discussing this onstage,' says the man who describes himself on his Facebook profile as a 'polymath' (i.e. 'freelance imam, writer, lecturer, translator, poet and playwright'). 'But it's two out of a thousand who have a defensive mindset and make assumptions, having not seen the play.'

'Whenever non-Muslims take up these themes, they won't have a deep interest in exploring it'

Ali co-founded the ten-year-old company which is one of a kind in Europe, developing and producing stage productions which explore the literature and heritage of the Muslim world. 'After the London 7/7 bombings, we are more about the spiritual reflection on extremism.' Ali has yet to see the musical, but believes that as a 'Muslim artist, whenever non-Muslims take up these themes, they won't have a deep interest in exploring it. They produce a piece if it can make waves, which is mostly seen as exploiting an issue. A lot reinforces stereotypes - which can be counter-productive.' For example, his play emphasises that the meaning of the word 'Jihad' is not 'holy war', but 'the battle to overcome conflict.'

In the history of the musical world, Hispanics battle whites (West Side Story, 1957), Jesus stars in a rock opera (Jesus Christ Superstar, 1971) and two producers put on a Nazi play (The Producers, 2001). So why not 'follow the British tradition of high-kicking, high-spirited musical theatre' in the words of the Edinburgh Evening News on 30 July, and bring Islam to the jukebox? Jihad: the Musical's deliberately 'kitsch' re-enaction of an international conflict – shiny pink burkas included - turns out to be a very wise choice. After all, a love for money is as big in the west as it is in the east, and this seems to be the real message from the show's creators. Talks are currently underway with producers in the UK, US and beyond. 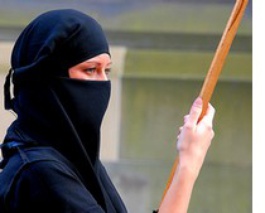 'Though the Edinburgh Fringe Festival may be a major forum for airing political subjects, the fact that more experienced performers, writers and companies tend not to perform there, plus the lack of significant world media coverage, mean that it’s hard to push any message home beyond the transient buzz of a rave five-star review.

Jihad: The Musical is hardly a great piece of theatre - but it does what it says on the packet: an entertaining piece of satire that uses the medium of the traditional Broadway musical to put bums on seats. Would anyone seriously consider the writers to be experts in modern Afghanistan, international terrorism, Islamic theology or blowing up large buildings in America? I would consider instead giving them lots of money and advice to polish and trim the show and then snap it up for a six-month run on London’s West End followed by a five-year run Off-Broadway in New York.

You’d have quite a different story if you put on Jihad: The Musical in Bradford (a major centre for the more traditional elements of Britain’s Islamic community) or in a theatre near the World Trade site in New York. But the ensuing furore would be purely a reaction to the inappropriate juxtaposition of the show with locales that wouldn’t reflect its true market – controversy is not always the best way to get those bums on seats.

There is nothing fundamentally (forgive the pun) disrespectful to Islam in Jihad: The Musical. Amazingly, for example, the female characters with veils keep them on all the time and are very modestly dressed. In my review of the show for The Stage newspaper, I can use a phrase like 'seductively sultry behind her veil' confident of crossing no major Islamic moral barrier. Moreover, the lead character commendably leaves his impoverished homeland Afghanistan to find a better life in the Big Apple without losing any of his traditional values. Wouldn’t '9.11: The All-Singing All-Dancing Musical' be a truer test of our attitudes?'