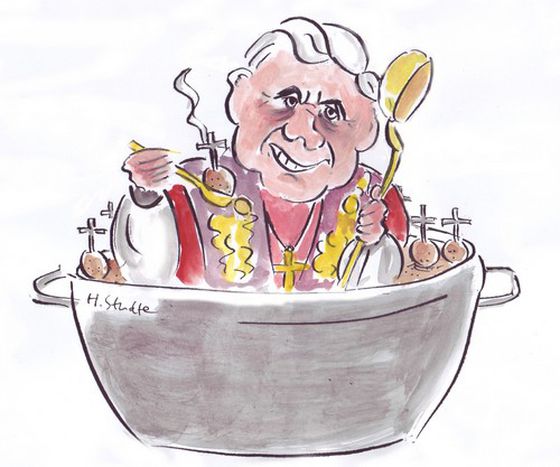 It's clear as mud that the Pope is Catholic

Is the Pope Catholic? retorts my friend Norbert when I ask if he’d like a beer. A beer and rhetoric lover, he shares both attributes with John, who then actually asks if the Pope is Catholic - staying true to the saying that the best way to answer a stupid question is with another stupid question.

The rhetorical question was already a popular stylistic device at the time of Roman orator Cicero’s Catiline Orations. We serve up a platitude in the form of a question and in doing so embellish phrases concerning everyday matters. Today such expressions often take a trip into nature. Does a one-legged duck swim in circles? Something else John might legitimately ask.

As sure as eggs is eggs, the answer is always más claro que el agua (as clear as water) in Spanish or so klar wie Kloßbrühe (as clear as dumpling soup) in German.

Forget soup and water; the weather also features in clarifying rhetoric: In Poland, something is as clear as the sun (to jasne jak soce). In Italy, a succinct l'acqua è bagnata or German Weisst du was? Wasser is nass (the water is wet) is used. Because nothing is more certain than hearing 'Amen' in church - denn eins ist so sicher wie das Amen in der Kirche - stupid questions will never die out.