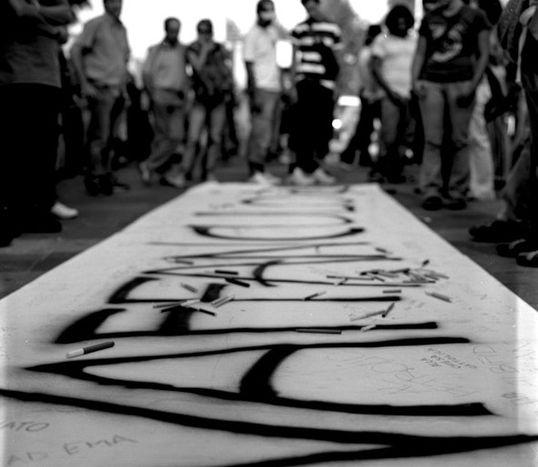 The echoes of Vaffanculo Day (V-day or ‘Fuck You Day’), a protest organised online and then in the streets of Bologna and Rome by comedian Beppe Grillo, are still resounding. From the nineties it was easier to know whether anti-politics would follow an easy path, but it has never been assumed that it could become a mark of identity in which you could classify every form of disagreement.

The anti-politics of power 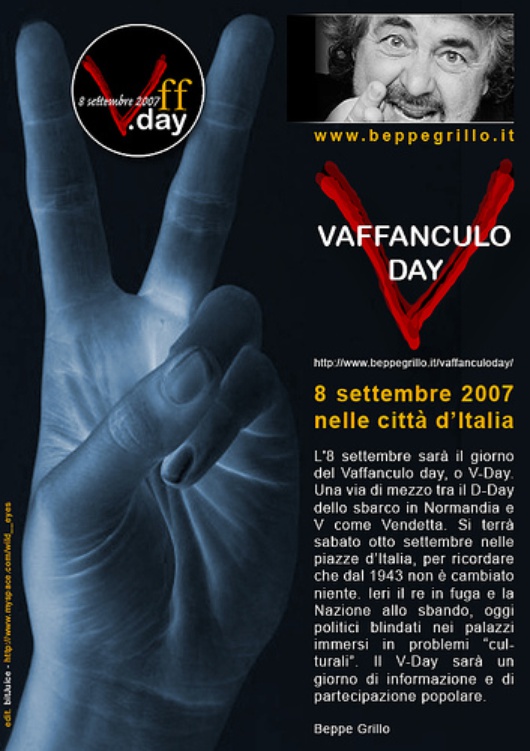 Anti-politics is a vague definition. It’s a generic term which encapsulates whatever expression (be it vulgar, violent or populist), which would have a hard time entering the ‘older’ parameters of political correctness. ‘It’s easy to speak about anti-politics today, especially in being unprecise or even mistaken; in Italy we mostly have Beppe Grillo to thanks for this,’ explains Donatella Campus, profesor of political sciences who has written a book on the theory: Anti-politics in Power: De Gaulle, Reagan, Berlusconi (Campus D, 2007).

At the beginning it was Italian prime minister Silvio Berlusconi who symbolised ‘populist’ or ‘street’ politics with his line of populism, especially with a programme screened on one of his channels, which dealt with simple satire. For a few months now though, anti-politics has openly become something purely comic. In this brand of crazy politics, comics arm themselves with disdain to get into power. It’s been around for a while, and the era in which buffoons cried ‘Look, the king is naked!’ has passed. Today, the king undresses himself and openly parades himself, and who do satire on top of that (and run the risk of not having much work to do), yearn for the top.

Grillo and Coluche: separated at birth? 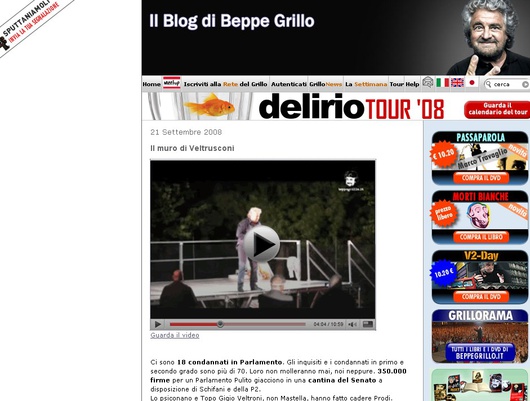 Anti-politics as a degeneration of politics; the Berlusconi phenomenon which is today’s language of the government, versus anti-politics, is the question today. Giuseppe Piero Grillo, aka Beppe Grillo, met his mentor on a cinema set, whilst he was shooting Madman at War('Scemo di Guerra', 1985) with the late Italian director Dino Risi. When rumours surfaced about his possible candidature to the Italian prime ministership, the media branded him a ‘madman of war’. After having been characterised of being in the ruling class for along time, Michel Colucci or ‘Coluche’, a comedian and Italian-originating actor born in Paris, decided to run for the French presidentials in 1981. His affinity wasn’t just limited to his profession and ambition to conquer the public and the animal public, but also for the same choice of vocabulary: ‘All together to fuck Colucheup!’ as the shock slogan went.

‘Coluche wasn’t the forerunner for the Italian leg of the phenomenon,’ continues Donatella Campus. ‘The French situation is different to what’s currently surrounding Grillo. Italy has been immersed in an atmosphere of open confrontation since the Tangentopoli (a term coined by the media in the nineties to describe the widespread corruption), and Berlusconi has taken advantage of this to enter the political sphere. It’s not been resolved yet. Nevertheless France, the political analyst continues,‘has known moments of profound crises in its fourth republic. Anti-politics in these cases has been strong, but the system responded each time by creating other institutions. There has never been an impression that the waters would come back to their beds. To explain Grillo it’s better to quote the Uomo Qualunque Front ('Fronte dell’Uomo qualunque'), an organisation set up by journalist Guglielmo Giannini. It went from being a newspaper to a post-war political party which incarnated the disilluion of the small bourgeoisies in the face of the state. But Colucci can also be a comparable phenomenon; in fact instead of talking about qualunquism in France, they talk about pojadism, which comes from French popular politician Pierre Poujade. It was he who created a protest movement of the artisans and businessmen versus the parliamentary powers in the fifties.’

Coluche and Grillo have exploited the media to get a fanbase: ‘Due to the fact that anti-politics is a question of direct dialogue with popular bases, they need the media’s help as it allows them to amplify their communication horizons. The Italian comedian uses the internet but, despite the fact that his blog (beppegrillo.it, available in English, Italian and Japanese) is well-visited, it would have remained a limited phenomenon had the traditional media not talked about it for days on end during V-day. For example you don’t hear about it now. Groups organised over the internet find it hard to come out, and it will probably go like that when the comedian doesn’t find another enemy to delight in tormenting. Oon the first V-day in September 2007, he fought against the incapable, corrupt political class, whilst in 2008 he accused journalists of being servants to power.’

In a 1981 opinion poll, 16% said they would vote for Coluche, which led to his pulling out of the race. Grillo launched his self-candidature for the elections in April 2008, but we are yet to discover what outcomes it may have. A lot of water has passed under the bridge since the comedian was ousted from the state television network after taking a swipe at the socialists in power, led by prime minister Bettino Craxi, during an appearance on RAI television. Today, since politics has become a spectacle and spectacle makes politics, it’s harder and harder to understand what needs cutting, and from where. After all, madmen can’t make war armed with just a knife and fork.