It is impossible to regulate the internet

In the past few years, the immense influence of the internet on social networks, political movements, democracy and transparency became evident. Can we explain this by the coming of age of a new online generation? Or is it just a coincidence, when modern problems meet modern solutions? With our guests from the online media, generation studies and civic movements, cafebabel.

com set out to find some explanations to this phenomenon through a public debate at the Sziget festival on Saturday, 13 August.How many of you are Hungarians? - András Istvánffy asked the audience of the debate entitled Online Revolution: From WikiLeaks to the Arab Spring, right after the introduction. After seeing very few hands up, the coordinator of the (Fourth Republic!) community action group decided to describe the organisation in more detail. An introduction is also publicly available on their website, but even despite this they have even been accused of being a far-right militia, of all things. Actually, this group of people have the following three slogans: freedom, community and patriotism. According to them, young Hungarians are responsible for doing something about their country, so that they will not have to go abroad for a better life. “Up until now, this country has gone through being a republic three times, but now we don't know exactly what kind of system we live in”, said Istvánffy. From the very beginning, he stressed that Internet plays a crucial role for their group: at first they initiated flash mobs to claim back public spaces for the people who actually live there, then last year they joined the anti-government protests, and all these events were organised online. 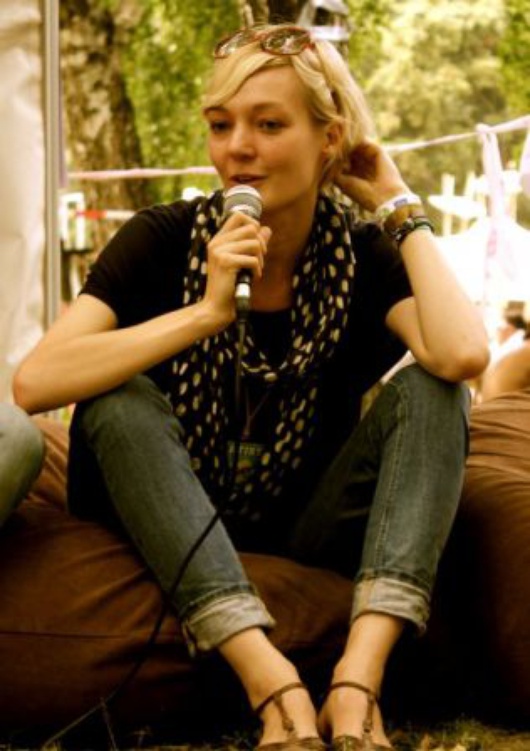 It is free and it is endless

Kristin Kruthaup arrived from Berlin, representing European online magazine . Right at the launch of this magazine it was obvious for them to go online. “It would not have been feasible for us to print the magazine and distribute it in all the European states. Our audience, young Europeans, practically lives online and our editors also work from many different cities of Europe.” According to András Istvánffy, the biggest advantage of the internet is that it is free. Although the challenges of fighting against the political elite were similar even 100 years ago, today social networking sites such as Facebook make the process of rallying people both fast and free. Ferenc Tarr, from the (Kontra Workshop) specialising in sociological research of the generation born in the 1980`s, sees the power of the online media in the possibility to compare and compile news from different sources. At the same time, this is also a weakness, because much more time is needed to sift through the information overload, he said.

The children of the online revolution

Wikileaks has shown the true power of the internet in shaping democracy. According to Ferenc Tarr, the dictators are unable to prevent freedom of expression on social networking sites and politicians cannot lie there. “If there’re 50,000 users on Twitter, and four journalist who are reporting in real time on Twitter about the events that are unfolding as we speak, the authorities simply don’t have any chance to disclose false information”, he added. In Hungary, Facebook is the most popular social networking site, which has an immense potential in communication. Despite this, most users usually post updates on what they eat, where they go out, how they feel. According to Kontra Workshop, a new function of social networking has started to develop: it can motivate the younger generation to express their views and build democracy from the grass-roots level. This could have implications for Hungary too, since their research showed that at the moment 70% of young Hungarians are not interested in politics at all. But it would be a mistake to think that the new media is only serving democracy, András Istvánffy added. We could think of the example of the rise of the Hungarian far-right party Jobbik, which has also utilised social networks to become popular.

Where do we go from now?

Online parliamentary voting, personalised newspapers – these are just two possibilities for the development of internet usage. András Istvánffy starts thinking about the future by contemplating the past: in Egypt people were mobilised by the internet, and Obama basically won the elections online. Based on this, the internet will play a tremendous role in political organisations. “It is hard to even understand what’s going on now, not talking about the future”, Kristin Kruthaup reacted. Then, as a journalist true to her profession, she used the theory of “video killed the radio star” adapted to the online-print conflict. She could not imagine a world without printed media in the future. The way printed media is used will be transformed, just like the way it happened with radio. According to Ferenc Tarr, the real challenge for journalists these days is how to use the possibility of direct communication with their readers. The debate raised a question in the audience, whether we need a user’s manual for the internet, in order to avoid spreading deceptive information. Not so long ago, a tragedy happened in Hungary, at a Budapest club called West-Balkán, where three young girls lost their lives, and the false information that emerged online right after the event only made the panic worse. This case has illustrated that we would need some regulation for the internet, but it is not really possible, our speakers agreed. Thus, the responsibility lies with journalists, who act as gatekeepers central to checking the accuracy of information. This sentence also became the final thought of our debate, since the loud music coming from the neighbouring Europe Stage did not allow us to continue. Instead, we all went back to our online world.