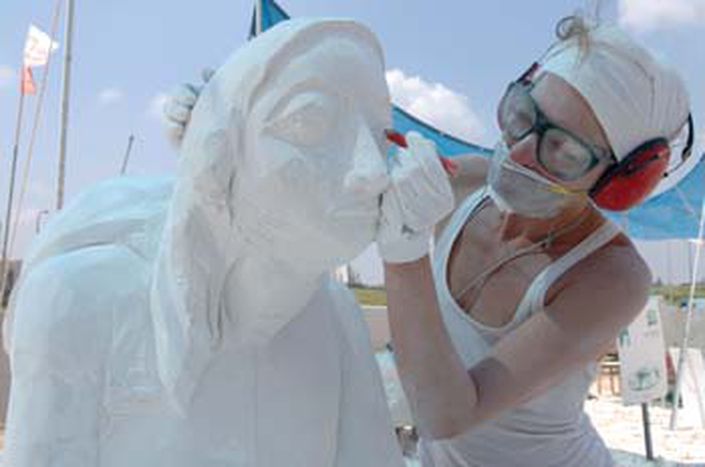 Israeli sculptress Nathalie Alony: ‘Palestinians in Gaza should be given something to lose’

The Italy-based artist says her viewpoint on the Middle East is fairly ‘balanced’, but Europeans do not realise what it is like for ‘Israel to be attacked in its sleep and continually threatened with annihilation’

It is International Holocaust remembrance day on 27 January when I leave for the city of Mantua to interview Nathalie Alony. On the train, two men trade newspapers and talk about the Holocaust and Gaza, one speaking in favour of the Israelis and the other in favour of the Palestinians. They cannot agree, and after a heated debate, one of the two exclaims, ‘People like you do not understand anything!’

'Between the Italian left wing and friends in Tel Aviv'

Maybe it is this which brings me to ask Nathalie Alony as soon as I meet her how she feels about the Israeli-Palestinian conflict as an Israeli artist living in Europe. ‘Before I moved to Italy, my compatriots told me not to listen to what was said in the media about the conflict because public opinion was biased in favour of the Palestinians. In fact, in the newspapers I have read quite complex reports which take both positions into account. However, it is difficult to manage discussions with people I know: they are halfway between the ideas of my Italian left-wing friends and those of my acquaintances and relatives in Tel Aviv. The former insist on the inhumane conditions in the Gaza Strip while the latter hold it against me that I no longer know what it is like to live in Israel.’

Nathalie is a thirty-four-year-old sculptress who was born in Tel Aviv and has followed her passion for art around Asia, America and Europe. ‘Art is difficult everywhere; in Israel because the market is small, in New York because there are so many artists, in Italy because there is no longer any artistic centre,' she says as she breastfeeds her daughter Lia. The conflict becomes a theme in her work in only one case. ‘I carved two boys facing each other in a circular structure pointing guns at each other's faces: Cain and Abel. It was not a reference to the Middle East only, but also to other countries in which people fight each other for the ground on which they stand, brothers.’

How did she see the conflict whilst still in Tel Aviv? ‘I go back to Israel at least twice a year, for Jewish Easter and for the October holidays. The strange thing is that when I am there, paradoxically, I do not feel as if there is a war. Tel Aviv is a very important cultural centre. It seems that people take refuge in art, music and the nightlife to escape from their worried and feelings of responsibility for the fighters. They live in a bubble.’ She shows me letters written in Hebrew which she has sent to people she knows in Israel and translates a few lines for me: ‘The Palestinians living in Gaza should be given something to lose, like a job or a house. They do not have water or electricity, they are desperate. They are human bombs used by the League of Arab States against Israel.’ 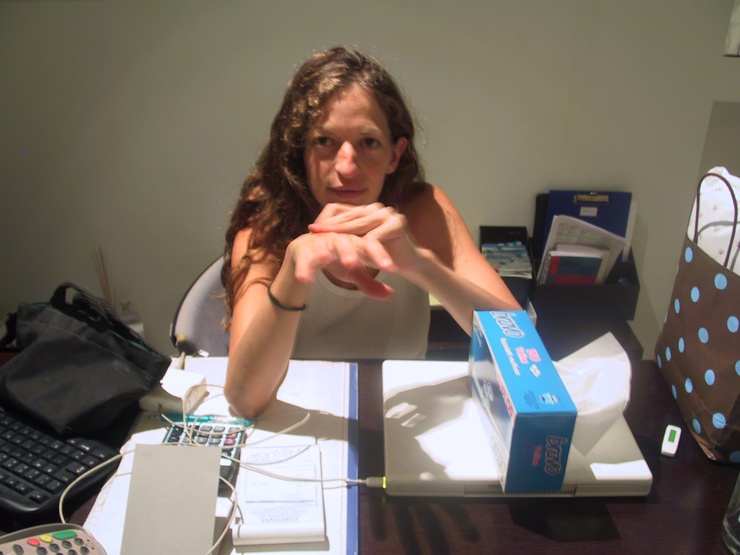 The description of the inhumane conditions of the Palestinians appears superfluous and redundant given the many images that the televisions transmit. ‘But those images do not show the war in Israel; rather, it is scenes of quiet cities and crowded places unexpectedly hit by missiles or kamikazes, Israel wounded while it sleeps. It is like thieves robbing your house while you are asleep.’ Who are the best possible interlocutors in Israel? Nathalie takes out the tin cans with which she is working: they are to become bombed houses in the most recent phase of the conflict.

As she puts them in order on her work table, she answers: ‘The best people to talk to are the new generations, who are more open and have travelled and who do not see everything in black and white. In Italy too, people should stop taking excessively radical positions, as is the case with a particular left-wing party when it organises rallies which do not take into account the delicate nature of the situation. Yesterday I received an invitation from a Facebook group to boycott Jewish shops, with a list of names! It should not be forgotten that Israel is a country that lives under the continual threat of annihilation and that, in the meantime, it is the security button of the west in the Middle East.’ It is lunchtime and there is news on television about the bombings that broke the ceasefire. ‘One of my sculptures, The Turtle Woman, is in Rehovot.' It's one of the cities hit by missiles. There, in front of a plate of drained pasta and a half-empty glass of beer, the war enters Nathalie Alony's art.