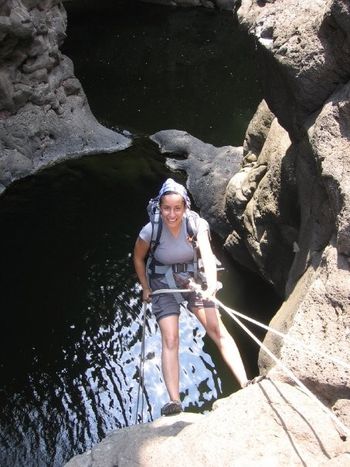 Israeli national trail: take a bible, talk to your God and don’t walk on water

The free month-and-a-half trek crosses Israel from tip to toe, via valleys and mountains, winding in the cities, deserts and woods. A bit of context to help you plan carefully and prepare for a tough physical effort, plus some tips 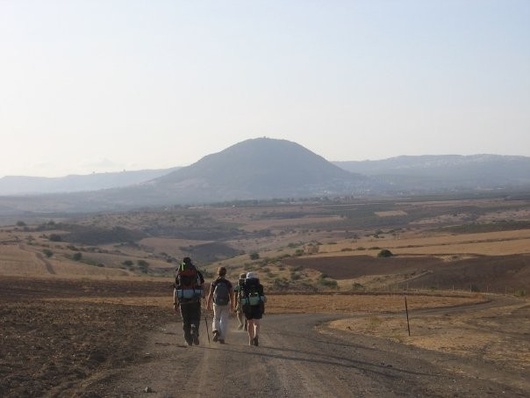 Israel is a small country. Air-wise it is only 470 kilometers from stem to stern and an easy one-day car drive. However, due to Israel's geographic location, on the global infertility line (latitude 25), it enjoys different climate areas in accordance with diverse landscapes, so it seems larger than it really is. This diversity set the paving of a 940-kilometre long tracking path into motion. The Israeli national trail (INT) was officially marked in 1991, undertaken in the recommended hiking seasons of autumn or spring. About 10, 000 people have walked it fully, even more so have walked it in parts.

Don’t do a Jesus on us

INT planners wanted to create a trail that would tell the story of Israel from the days of the bible till today. It passes numerous sites which have a special significance both to Israelis and to those who considered the history of the land of Israel close to their heart - christians, muslims, jews, pilgrims and adventure-hunters. The most significant sites throughout the track are the sites where the biblical stories took place. Take the Ela valley where David fought Goliath or the fields where Samson played with lions next to Zor’a. Serious trackers should take the bible with them to make their trip an extraordinary spiritual experience.

The trail can be divided into three main sections - northern, central (which are the most inhabited, with western cities) and southern. But the route does not go through the occupied territories in Judea and Samaria, nor the Golan Heights; it’s selected thanks to pure political dispute, and so only passes within the limits of the state of Israel. It is completely safe. The path crosses Israel from north to south, though you can track the other way round. Beginning in the north is also an easy and comfortable opening point – it is an easy hike along the trail where there are lots of tales, people from different religions and tourists as well. Don’t try to walk on the water at the Sea of Galilee - it does not really work.

The route’s ancient Roman monuments, theatres, roads, water systems and aqueducts evoke the life of the ancient residents. The castles, fortifications and fortresses which were built by conquering crusaders in medieval times, mostly seen in the northern parts of the track, are exceptionally impressive. Tel Aviv is a refreshing and unusual break. The city offers 24-hour parties and never-endings pub- and café-lined streets streets. Add its great beaches, beautiful women everywhere you look, large gay scene and sunsets, and you’re set to hit the Israeli lowland, scene of biblical stories. From there you will start hiking towards Jerusalem, where finally, you will see and understand what everyone is talking about – the western wall, El-Aksa musk and the church of nativity.

After eating enough hummus and talking directly with your God, keep heading south. Its story is whispered by the desert wind; most of Israel’s territory is deserted areas, which are also divided into several parts. The INT goes through most, teaching urban travellers a short lesson about the power of nature. The Dead Sea lies in the eastern part of the Judea desert - the cradle of christianity. The chilly weather of the Jerusalem high will become quickly dry and hot as a welcome greeting for entering the desert. From the Judea desert you hit the Negev, the greatest desert in Israel. There you’ll see the Machteshim – two unique large natural craters you can only find in Israel. From the Negev to the Arava, an isolated and almost not settled desert which leads to Eilat – the most southern point in Israel. In the Arava you will see the Timna valley, where king Salomon’s mines are. Just before arriving to Eilat, on the summit of the Zfahot Mountain, you will suddenly notice that in the middle of the desert, arises the Red Sea. 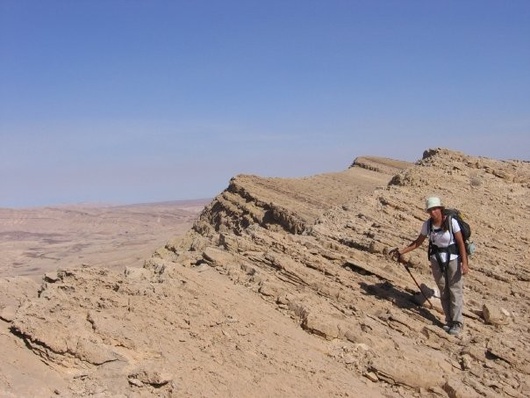 The INT is a special social experience as well; along the way the ‘INT angels’ , the residents of the villages along the way, help the trackers in whatever they need, be it food, water or shelter for the night. It’s usually free, but may come with a symbolic charge of about 30-40 NIS (1 euro or 87p is 5 new Israeli shekels). The INT angels are mostly farmers who live in the Kibutz – a unique form of settlements who believe in equality or in isolated settlements in the deserts. The lack of rain and hot nights mean you can safely sleep outdoors or in a tent. At any stage of the track you can stop and return to Tel-Aviv within a few hours using public transport; Israel’s small size means everything is quite close by. You can get also get mobile phone reception in almost any part of track . A few national parks charge for entrance, at about 15 NIS. You will have to pay only for food and drinks. Don’t be afraid to find yourself alone - there are numerous social networks in which you can find companion for your trip and more information in the forum of the INT at israelnationaltrail.com. See you in Israel!