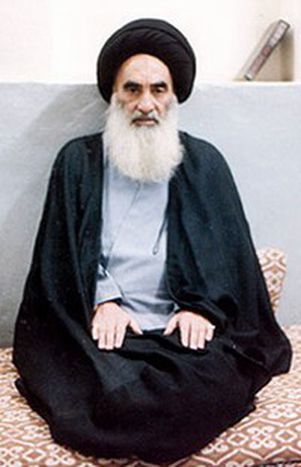 Is Iraq on route to becoming a theocratic state?

Iraq’s Shiite leader is demanding that the country base its new constitution on the principles of Islam. Members of Iraq’s minority Sunni community fear that the Shiites want to see the country turned into an Iranian-style Islamic theocracy.

In Iraq, the fear that Islam will take over the country’s new constitution is looming. The Sharia, traditional Islamic law, is set to form the sole basis of the new Iraqi constitution. During the parliamentary elections at the end of January 2005, the Shiite United Iraqi Alliance gained the absolute majority and now has significant influence over the drafting of the new constitution, which is set to be finished by mid-August. A Sharia-style constitution is supported by Iraq’s Shiite leader, Grand Ayatollah Ali al-Sistani, who is very much respected among Shiites and is highly influential. Abroad, however, the old, turbaned, white-bearded man is reminiscent of Ayatollah Khomeini and his 1979 Iranian Revolution, and has awoken fears that the Shiites in Iraq could introduce a theocratic model, as seen in Iran, via democratic means.

A lack of widespread support

The debate about the role of Islam hinges on the legal position of the Sharia. In the interim constitution that was adopted in April 2004, the Sharia was mentioned as a source of legislation: laws must not contravene the Sharia, but must at the same time be compatible with modern basic freedoms. The consequences of this, however, are debatable. Neighbouring countries have proven that suggestions are not always put into practice. A lot of it depends on how the Sharia will be transferred to the country’s laws and whether or not these laws will be set down and applied by the courts. Moreover, the conditions of the constitution will remain unfulfilled without significant Islamic support.

But in Iraq, organised Islamic mass movements are non-existent due to the fact that Saddam Hussein’s socialist and secular Baath Party immediately suppressed all opposition, which means that even today Islam is lacking the widespread support it needs in Iraq to influence politics and society. This is in contrast to Lebanon, Palestine and Pakistan, where the Islamic movements Hezbollah, Hamas and Jamaat-e-Islami have exerted a major influence over politics and society, using hospitals, schools and mosques to build parallel states

Despite the influence of violent terrorists such as Abu Musab al-Zarqawi, who is operating locally for al-Qaeda, and Shiite Cleric Muqtada al-Sadr, who commands thousands of militia fighters in the capital's slums, neither the social significance of the Islamists nor their support throughout Iraq must be overestimated. Due to his use of excessive violence, the young al-Sadr, who gained authority and popularity thanks to his father, a radical cleric who played a prominent role in the resistance movement against Saddam’s dictatorship, no longer commands the respect he once had. His defeat in a power struggle with al-Sistani also contributed to his downfall.

Moreover, the Grand Ayatollah from Nadjaf not only enjoys great authority amongst the Shiite society on theological issues, but his words also carry great weight on the political scene. Therefore his call for non-aggressive tactics, cooperation and participation at the elections played an important role in ensuring that Shiite areas generally remained calm.

Not theocratic but ultra conservative

As a result of the election victory for the Shiites, al-Sistani was entitled to have a say in the new constitution. However, he has consistently rejected the idea of a political role for Islam in the style of Iran, whereby religious authorities also have the last say on political matters. The idea of wielding political power through spirituality represents a theological innovation that directly contravenes the Shiite tradition of quietism, which maintains that religion and politics must be separate.

It is important not to fear that al-Sistani will introduce a theocratic state. However, a modern and secular Iraq is now completely out of the question. Despite his moderate political views, he represents a very religious and ultra-conservative philosophy whereby women, in particular, are granted very little freedom. Furthermore, in February he announced that he favoured the Islamic Sharia as the sole source of legislation in Iraq. If this has no immediate consequences on legislation or jurisprudence then it will indicate the political balance of power in Iraq. If political Islam gains in power in Iraq, however, the mention of the Sharia as the sole source of legislation in the constitution could prepare the way for further measures to make Islam more widespread throughout Iraq.