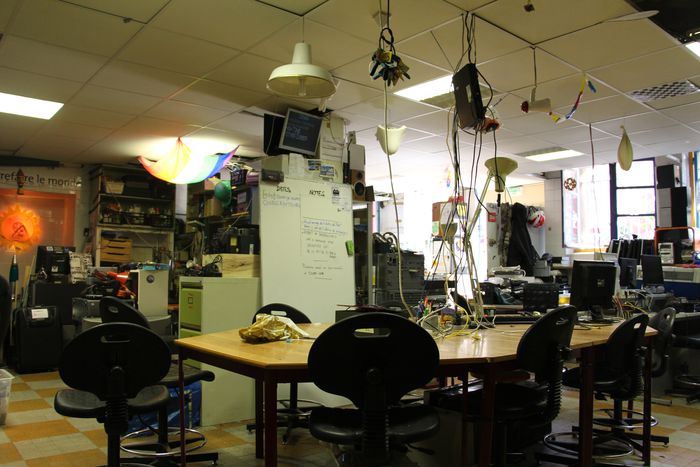 In the world of Le Loop, a Parisian hacker space

Located in a squat in the heart of Paris, Le Loop hackers are reclaiming technologies in order to challenge the realm of the possible and the impossible, in a creative and engaged way. We explore a hacker space where you can have fun, drink (craft) beer and where nobody wears a tie.

Behind the sign "Experimental zone", an outdoor stairway leads to the basement. That is where you can find "Le Loop", which stands for Laboratoire ouvert ou pas (which roughly translates as 'open laboratory - or not, it doesn't matter'), a hackerspace located in the 12th arrondissement in Paris. As you walk down, there's a bird cage hanging above your head. The hackers replaced white doves with computer mice, which in their eyes is probably quite an apt way of symbolising freedom.

Central processing units (CPUs) stacked on top of one another, tangled cables, soldering irons, it's tough to define precisely what a "hackerspace" is. "That is where we fiddle with things", sums up Nar, a Loop guy. Today, the regulars are busy organising the weekend's reception with the "Gare XP", another hacker squat, settled just next door. "Have we delivered enough beer kegs? What do we do for the entries? A bracelet system?", asks a guy with long hair.

Before the reception, Le Loop's people will have found a solution, because that is exactly what this is about: being resourceful. Whether it is to detect a lack of water in the toilet bowl with laser detectors, or to build a 3D printer from scratch, they can do it all. "The sky is the limit", says Tom, Le Loop's founder. It is the very principle of the hackerspace. "It is a space where people gather, take command of technologies - new or not - share them with one another and see what they can achieve together. It is a place remains free and that everyone can call their own", explains the hacker. To define themselves, Le Loop's crew quote the specialised glossary of hacker slang, the "Jargon File": "a hacker is one who enjoys the intellectual challenge of creatively overcoming or circumventing limitations." 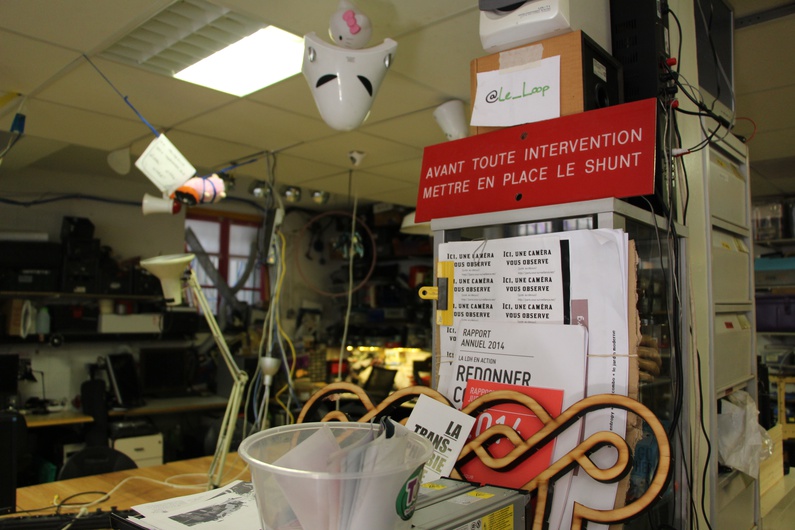 Le Loop is what people make of it. Like Fight Club, "There is only one rule: 'do not force me to make rules." You come to do what you feel like doing," says Tom. Informal and disorganised activities come as a result, but their energy always ends up creating useful... or totally useless things, improvised festivals, and even "cryptoparties." These are meetings during which hackers teach beginners the basics of cryptography, how to encrypt emails, or even how to explore the Deep Web via "Tor", a global decentralised network parallel to the Web, guaranteeing anonymity. Currently, cryptography classes are taking place at Le Loop, given by a guest of choice in the geek world,  Nadim Kobeissi. With his teenage looks, the young man has already invented Cryptocat, an online service for safe discussion which has already been used notably to thwart censorship during the Arab Spring.

"If we screwed up, guys over there could get caught"

At the back of their screens, hackers customised their PC with stickers of "Tor", "Keep your eyes open," or even "La Quadrature du Net" (Squaring of the Net), an association promoting the rights and freedoms of citizens on the Internet. Le Loop is also a committed place, even if the hackers there display the characteristics of anti-heroes. Some are linked to Télécomix, an international hacker group engaged for the freedom of speech. "Télécomix is not a group of 10,000 masked hackers. No, they are dudes who thought one day: "technically, we can go around censorship," says Tom, minimising the principle.

The group became known by rerouting Internet traffic coming from Syria to help web users against surveillance risks. The hacker explains that the idea to react came to them during the revolution in Egypt. "It is inconceivable that a dictator says 'That's enough, I will now control public opinion, I will shut the Internet down'. So four geeks spend 20 bucks to get a server and the Internet now goes through them. Everything was improvised," tells Tom. But this hacker adds a warning: being engaged involves responsibilities.

"If we screw up, guys over there could get caught. If we don't have news from a guy, it's worrying. Sometimes, we know that technically, we could arrange things, but we don't because we don't want to set foot into something dangerous. So engaged, yes, but up to the best of our ability," he clarifies. It's hard to say who, at Le Loop, ventures in this "hacktivism" and to what extent. "There are things that I do but I don't necessarily talk about it to everyone," says Tom.

"You need to be aware that Apple is lying to us"

Le Loop is currently occupying the basement of the Jardin d'Alice (Alice's Garden), an environmentalist artist collective who allowed to let them use the squat. Some hackers are out on the patio, shirtless in the sun, typing on their keyboard. For Tom, who has moved the laboratory a dozen times, the very concept of the squat fits in Le Loop's philosophy. "You can put screws in walls, which you can't do in your building or in your university. Here, on the contrary, you should go right ahead! It would be a shame. We are not looking to stock up on material, and invest, we know we are constantly on the move," he explains. 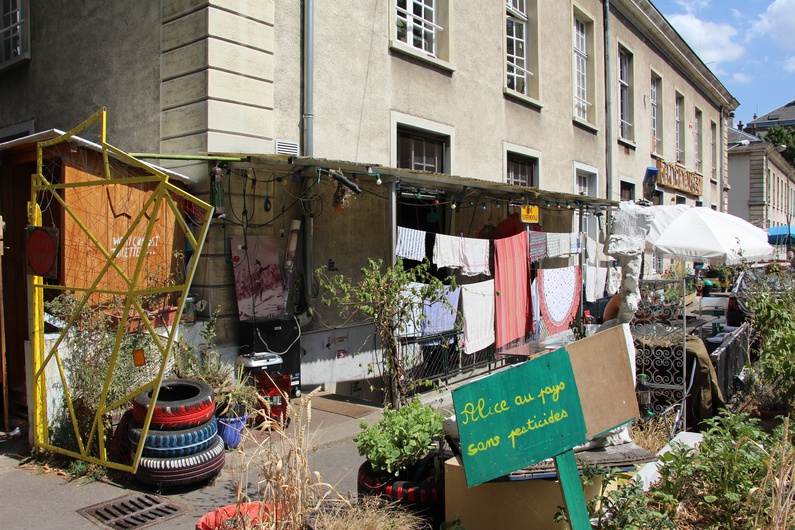 The hackerspace encourages the DIY "Do It Yourself" doctrine. At Le Loop, all surrounding objects and tools are demystified. The place urges you to create the things you need yourself rather than to run to the supermarkets. If you've lost your electricity and technology notebooks from 9th grade, the Internet and Le Loop's crew are there to bring and share their knowledge.

The concept of hackerspaces is not new. In the 70s and the 80s, the "Homebrew Computer Club," in the Silicon Valley, brought together amateurs and computer enthusiasts who came to exchange their ideas, experiments and innovations. Among them, Steve Jobs and Steve Wozniak who created Apple I. However, it is more to the atmosphere and the creative energy of those places that the Loop would probably prefer to be compared, rather than to the origins of the American multinational's business success.

"You need to be aware that Apple is lying to us and that you don't need mad scientists and crazy laboratories with impossible budgets to create things. No worries, the iPad, we can make it for you with recycling. People need to stop mystifying computer science. It's plain and simple, it's logic. With marketing getting in the way, now things are set, everybody believes that Apple is magic," he says with regret.

And if there is one thing that really pisses Tom off, it is that Le Loop's universe is being hijacked by the corporate world. "Some start-ups come here to recruit. If we wanted to make money, we wouldn't be coming to Le Loop," he says harshly. The hackerspace could soon move its mass of CPUs, electronic gadgets and keyboards again to find another squat. Follow their adventure on their website Leloop.org.