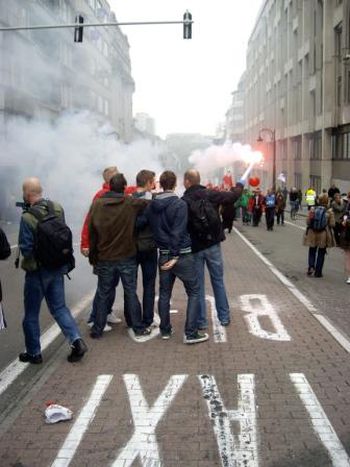 In Brussels yesterday, Unions across Europe said 'NO' to austerity measures

By Rose Kelleher Unemployment in Europe is hitting 22 million. Brussels is as good a place as any to complain about it.

Insiders at the European Commission often joke that apart from a “soupe du jour” in the work canteen, there is very often a “protest du jour” going on outside, such is the frequency of grievances inspired by the E.U.

On the menu on Wednesday in Brussels was one of the largest demonstrations the capital has seen in a decade, attended by an estimated 100,000 people. European governments are slashing public spending. The E.U. is threatening fines on countries that fail to shore up deficits. Unions across Europe don't care who is behind the recent spate of cuts. They are saying a very definite and unified “No” to austerity measures.

The protests, with representatives from more than 30 countries, are part of Europe-wide strike action. There have been similar protests in Spain, Poland, Portugal, Greece, Ireland, Romania and Serbia, with more planned. Unions are angry at proposed plans to rein in sovereign debt with measures like tax hikes, budget cuts, pension cuts and extensions on the retirement age. European governments say they are trying to avoid debt crises in the future. They point to the kind of bailout Greece needed from the EU and the IMF. 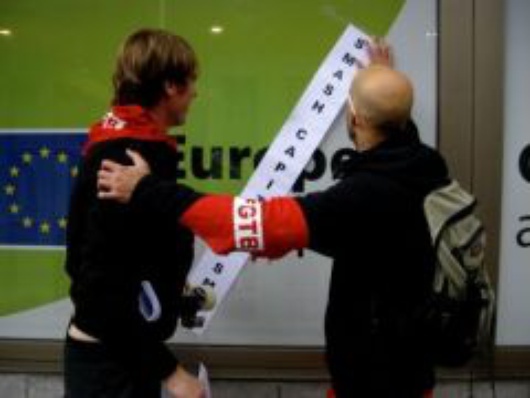 The unions say they are punishing the wrong people. A common nemesis for Wednesday's marchers is the financiers, or “the fat cat bankers who caused the crisis in the first place” as they are called by Nick Parker, a member of the Public and Commercial Services Union in the UK who took a day's leave to join his European comrades in Brussels. But what effect does a demonstration like this have? He says “If the government in Greece had pushed through the austerity measures with no opposition, then it would make the other member states think they can do the same. They would think they could cut back on jobs, cut back on public services. Now the government of Britain and governments of other countries will think twice.”

He adds “We want to build a mass campaign to defend our jobs and services. I work for Job Centre Plus, a British government employment agency. I talk to the most vulnerable people in society. These people have dark houses because they've run out of electricity. They've got cold houses coz they cant pay for gas; And thats before austerity measures.” 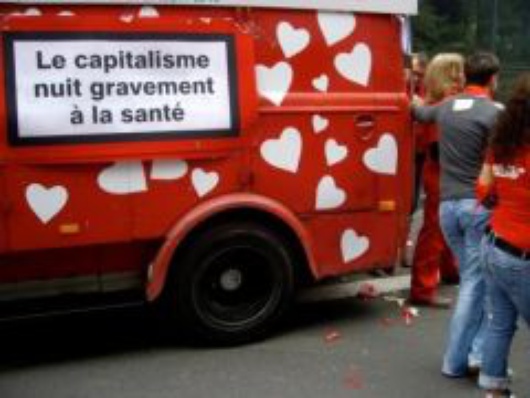 Europeans are angry at the cutbacks. But who to blame? Nick says “Working people have to pay for the mistakes of the bankers”. But Eurocrats also feel they are being scapegoated by under-pressure national leaders. They were warned to stay away from windows on Wednesday for fear of recrimination in the form of stone throwing from the crowds, and not to display their commission badges too openly. A hundred or so marchers were arrested for behaviour that “has no place in a peaceful protest”.

Though the languages were different, the message was the same. Pieter Pauwels from Brussels handed out free beer and party leaflets as a representative of the Left Socialist Party in Brussels. He says “Because the workers in those countries which have already experienced severe cutbacks have the same interests as the workers in those countries where there have not yet been severe cutbacks. A cutback in Belgium is a problem for workers in other European countries. We are protesting against huge tax cuts, and this protest will not be the end. We are calling for an E.U. day of general strike, because the problem is not just national, it is on a European level." 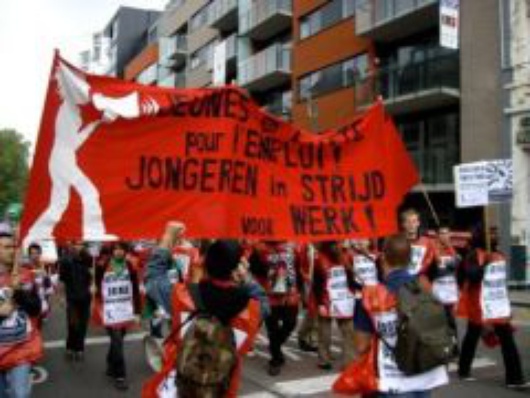 The marchers also included students anxious about their place in the labour market after graduation. Gerald Renier from Brussels is a member of the FGTB students union of ULB, and he says that the right to education is just as important as the right to jobs. “The FGTB students union fights for the rights of students, but also the right to study, the right for everyone to study....to make it easier for the poor, to make university universal.” There were also a number of delegations from E.U. hopeful Turkey. Dr. Osman Yildiz from the Hak-Is Trade Union Confederation said “We are part of ETUC, we are a part of Europe and our message is to make a balance between government and social policy.”

The protest was led buy the European Trade Union Confederation and featured flares, fighting talk and a float with Dolly Parton's “Working Nine to Five” on loop. But with the decline of union membership in Europe in the past few years, one wonders if such shows of solidarity have the intended effect. The flag-waving, slogan-shouting, and often beer-swilling comrades included students, feminist groups, political parties and anarchists, and even demonstrators posing as the “faceless bankers”. 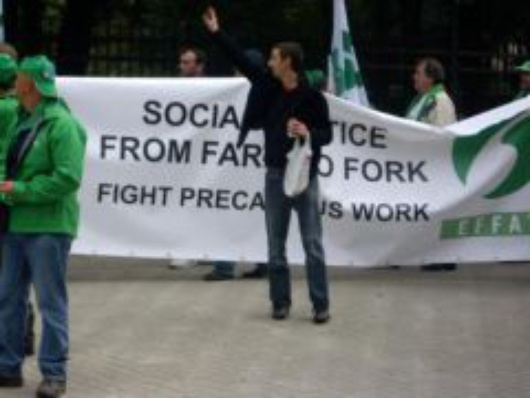 Invoking Karl Marx, they spoke from pulpits about the need to stop the welfare of workers being eclipsed by the bailouts of banks. Coal miners marched to the beat of Rage Against the Machine, the arches of the Cinquantennaire monument provided the backdrop. Gridlocked traffic, pink flares and mounted police, plus the sheer size and noise of the protests in Brussels today provided ample evidence of a growing unrest. “They made the crisis, let them pay for it! Today we express our concern that the very people who caused this crisis will stop the recovery and return Europe to recession.” said Wanja Lundby-Wedin, president of the European Trade Union Confederation. “Together we will return Europe to the path of growth and social justice.”