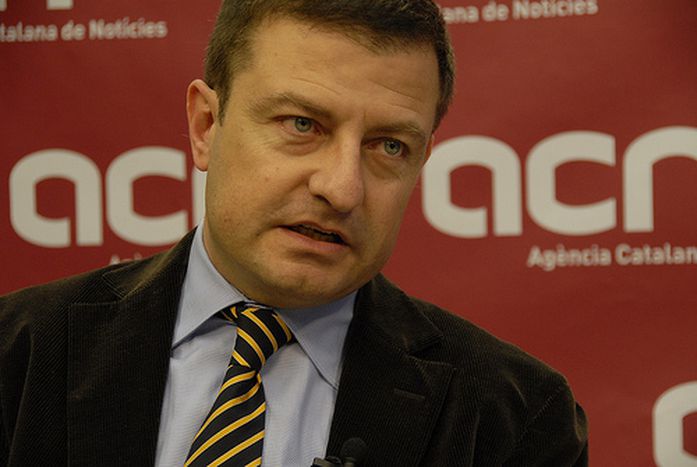 Europe will make itself ridiculous if it is not up to the standards set out by the American initiatives on climate change, disarmament and pacification in Iraq and Afghanistan, says the Spaniard and deputy MEP for the liberals

The Spaniard Ignasi Guardans, deputy MEP for the liberals, has denounced the 'absence of European political willpower when faced with (US president Barack) Obama’s challenges.' At only 45 years old, already possessed of intense parliamentary experience, after being vetoed by his party, the democratic convergence of Catalonia (Convergencia Democrática de Cataluña, CDC), which, in coalition with the democratic union of Catalonia (Unión Democrática de Cataluña, UDC), has formed the centre national party convergence and union (Convergencia y Unión), he has returned to lead for the June 2009 European elections.

In southern countries, parties are chosen to head up electoral lists for the European elections based on local criteria

He laments that: 'Unfortunately, in southern countries, parties are chosen to head up electoral lists for the European elections based on local criteria.' The grandson of one of the historical leaders of Catalan regionalism, Francesc Cambó, has been losing his Catalan pedigree in the eyes of the CDC leader, Artur Mas, ever since he answered in the negative to the question of whether he would vote in favour of Catalonia’s independence in a hypothetical referendum. Interview.

Don’t you get the impression that Obama has taken over as ‘global nice guy’ from the Europeans?

There has been an increase in share capital internationally and the US is very much a part of this, but Europe has remained in the minority. While we have been discussing who we are and who we are not, Obama has taken responsibility for European values and what Europe defends.

Europe has certainly not changed how it does things, meaning that it has become neo-conservative. We continue to defend the same things as before and so maintain our reputation as defenders who have neither the courage nor the means to put that which we are defending into practice.

Do you think that Europe is ready for the wave of transformation that Obama seems to represent?

I would like to think so, but I am not sure…

What is it that we lack in order to be ready?

The means and the political willpower to be worthy of his moral values. We have the means when it comes to the Lisbon treaty, but no treaty can give us political willpower. I am not very 'eurooptimistic'; I don’t see anyone who wants to get involved and follow the consequences of what we are defending through to the end.

Setting aside institutions and means, do we need a new leader in Europe?

It is clear that, although the type of leadership embodied by (French president Nicolas) Sarkozy was good despite lasting only six months, it was ineffectual because he could not take on the consequences of a crisis like the one in Georgia. That is where Lisbon comes in by anticipating a two-and-a-half-year EU presidency.

Do you think anyone else could have done what Sarkozy did in six months?

I do not think so, but I do not think that the leader must always be from a big country either. It is a profound error to think that one cannot be an active, energetic leader without the support of millions of voters.

Who would you see as leader of the EU?

But you work with a lot of people…

Yes, but at the moment I cannot think of anyone. I do not think it could be (former British prime minister) Tony Blair, if that is who you are talking about. It would be a mistake, he was completely ineffectual in the Middle East. He would do good work if he was responsible for culture or conferences, but not as leader of any sort of political process.

Do you think this legislation is positive?

Yes, we have improved citizens’ protection. And we have not only improved things but have also prevented bad things from happening…

What have you prevented?

That the US’s obsession with security regarding the violation of data protection be copied in the EU without any type of filter. Also in relation to the directive on retaining data from personal calls; there was immense external pressure from the Germans and the British to force us to give carte blanche to the police to access telephone calls…

What do you mean by external pressure?

Trying legal routes other than voting, and telling us in parliament that if we did not vote what they wanted, we would be preventing them from fighting terrorism and that any deaths would be our responsibility.

Are you happy in the liberal group?

Yes, because of its great pro-European motivation. The European idealism of my fellow party members makes me feel very comfortable here. As for voting patterns, on some issues my group is like a smaller version of the parliament, there is a great deal of plurality and the internal debates are fascinating; agreements we have reached have be representative of the entire parliament.

How can people be made more enthusiastic about European politics so that they vote more than in 2004?

It is important to communicate the fact that a lot is being played out here, although many parties do not believe this and are not doing anything to transmit the message.

Does European politics depend on a majority of the left or right wing, or more liberal or national?

If there were a distinct majority now, the police could listen in to our telephone conversations without going through a judge, the working day would last 65 hours and collective negotiation would have disappeared. There would not be any measures against climate change either.