If land could move: what would move European countries? 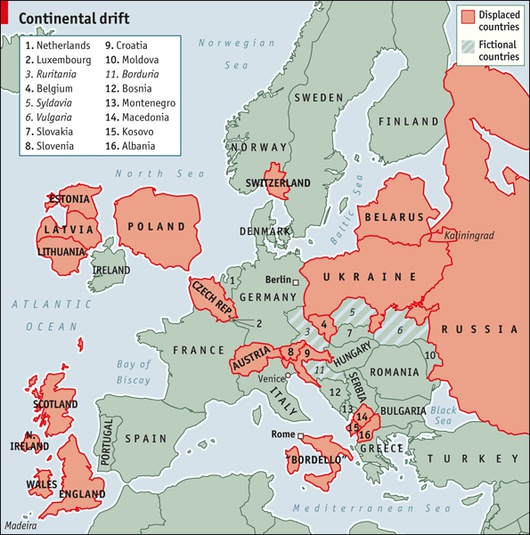 "The Economist" had this funky mental exercise: imagine that countries could be relocated on the map. Don't read the article yet, first look at the map. I'll repost it for you in case the article becomes subscribers-only in the future:

Source: EconomistWould you like to know what I thought about it? Don't read the article yet.

Now, read the article. It's totally different, huh? Belgium related to Slovakia through language policy? The Baltic States and Poland floating on the sea just to be closer to the US? The UK moving South only because of financial troubles? And what's with these fictional countries?Switzerland would join the club of rich, calm and neutral countries. I wonder though, would it still be able to produce "Milka"? The relocation would ease migration routes for Balts and Poles. Grandparents will be just a ferry trip away. Doctors in Norway could still benefit from cheaper sea transport. Czech Republic would join the club of beer-drinkers (Ireland, NL, Germany), concentrating the beer culture in the West of Europe. Brits would finally be able to enjoy some OK climate. Northern Italy would become rich, and Southern Italy could keep Berlusconi. I took part in a seminar on European Neighbourhood Policy with Ukraine. Ukrainian diplomats were saying us that they didn't want to be considered neighbours of Europe (note: not just the EU - it's not called EU Neighbourhood Policy) while they feel essentially European. So Brussels bureaucrats would understand what it means being neighbours with Ukraine. Hungary would be removed from Austria! Does it mean that Austria would take over in producing "Milka"? Croatia would lose a part of its magnificent coastline. Why did you do it to them? Belarus would have access to the sea - for better or for worse. Russia will be closer to Germany - certain politicians will be happy. Will sea access make Kosovo richer? They frivolously left the three Caucasus states to Russia!!! @$^@#(%^! And what's the deal with these fictional countries? Why not move the Caucasus countries there? Croatia could move back to its original location and maintain its coastline. 3 and 9 could be joined together and become Azerbaijan. Preferably it would take its natural resources along. Having a source of oil so near, Germany wouldn't have to obey the Russian government anymore. Ukraine would also feel safe, since its gas would not necessarily be cut of in winter. There would be more real dialogue between Russia and its neighbours. 5 could become Georgia. It would be safely surrounded by friendly countries and, in case it wanted to join the EU in the future, Brussels would be very near to reach. 6 would then become Armenia, which would not mind the neighbours it would get. Of course, Armenia would perhaps be happier to swap with Austria, be close to France and produce "Milka". Interestingly, they didn't move Romania betweeen Italy and Spain.In short, nice map - unconvincing article.