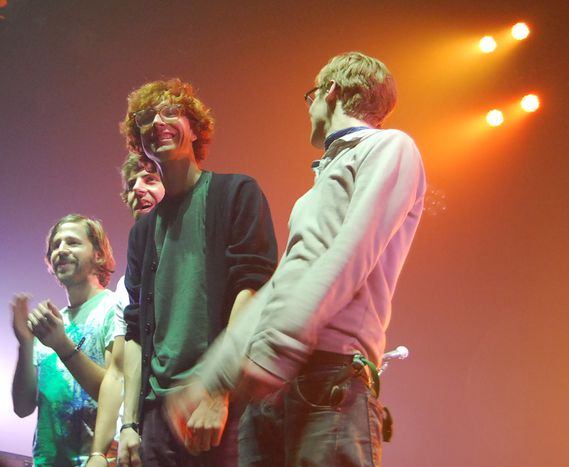 ‘If I had to choose between sex and performing live with The Whitest Boy Alive...’

One day it was just computers. The next day, god brought instruments. Over the past decade, the Berlin-based band’s polyphonic electronic sound has translated into pure deprogrammed happiness for live dance fans across Europe. We hear the boys from Bergen, Berlin and Toruń out

Press conferences are always a bit naff. In this one, The Whitest Boy Alive are a little aggro-bored-reactive. Perhaps it’s because we’re at the Transmusicales festival in Rennes, an annual showcase which claims to break bands – the likes of The Prodigy, Garbage, We Have Band and Micachu and the Shapes have played here whilst still anon – and, well, why are the 2003-era band headline openers? ‘It’s very strange to be here for 5, 000 people,’ Norwegian lead singer Erlend Øye  agrees. The lads pointedly ask the reporters questions back at them, an experience which seems to interest them more: why do you think we’re called The Whitest Boy Alive? How did you discover us? - ‘Ah yes, we are a very good Myspace band,’ nods Øye - Do we know their music? Shy silence. Is anyone here from the south of France...? There’s a gulf between the four on the sofa and us ‘Frenchies’ packed up against the wall. One Gainsbourg-esque teenager flicks them at their game, whispering an atypical question. ‘If I had to choose living without sex or without performing onstage?’ chuckles a good-humoured Øye, bowing his dyed red curly mop. 'I’d have to be onstage.’

They clearly know each other well, and are in control. The project began in 2003, precipitating an era when Øye and Polish bassist Marcin ‘Öz’ were tiring of their computer-based dance music. Tracing the sound coming from the basement studio in their building, they discovered their future bandmates, who were then two-thirds of early noughties German dance music act Extra Produktionen. ‘These two guys were spooking around the building. We wanted a new lock for the door so they didn’t steal the instruments,’ laughs Öz, gesturing at ‘Mr. Synth’ Rhodes and Crumar player Daniel Nentwig, 32, who joined in 2006, and drummer Sebastian Maschat. ‘I thought Marcin looked very hard when I first met him,’ Øye, 34, offers about the former house resident at WMF club, otherwise known as ‘DJ Highfish’.

‘We’re not unconventional at all,’ defends Nentwig, visibly roused at one question. ‘We use drums, bass and the guitar too! Our music has its roots in that 70s decade when we were born. Look at all of the dance, soul and disco bands; it all started with James Brown and Thriller.’ Erlend interrupts him – ‘We only use one unconventional instrument’ - ‘The (Italian) synth I play is from 1978,’ Nentwig continues, relaxing a little. ‘I like to play it, it has so many controls. And the eighties brought more sound to synthesisers. Anyway, I only listen to old music.’ ‘And I really like Kim Ki O at the moment,' adds Erlend.

Öz and Øye have a friendly battle about the German capital, where their music hails from. ‘Yes and why don’t I live there anymore?’ Oye is exclaiming. ‘The music scene in Berlin is not particularly good. There’s a lot of hype but it’s not the best for good content. Bergen (where he is from - ed) is good for bands.’ ‘There are lots of producers and musicians and it’s cheap,’ counters Marcin. ‘You don’t have to worry as much as you do in London or Paris for rent and so on. Berlin is kind of full though, it’s hard to find a space. But if you make it interesting for people to go to your city, they will.’ Maschat agrees about the city's particularity: its musical exodus. ‘People move to Berlin to make music; they live there, and that’s what the music scene is, it comes from all over the world in the city, so you can’t name it as one thing. Like Berlin hip hop; it's not very good.’

'We are pretty alone in Berlin' 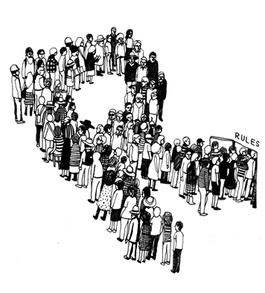 ‘I don’t think there is a good Berlin scene for bands anyway,’ Øye repeats. ‘We are pretty alone in Berlin.’ The four deny that recording both their albums in Mexico was a compromise. ‘We try to combine having a good time and making good music,’ says Øye. ‘We have very good discipline,’ Öz adds. It’s not the reason why their latest album, released in March 2009 on their German label bubbles, is called Rules. ‘There are things on the internet about the album’s name which are completely incorrect,’ says Øye. ‘It’s similar to DJs –when I realised that they actually had rules about how you were supposed to do it. I went to see one guy who had made a great record, and waited all night for that song, and at the end I asked him when he was going to play it, and he just said aaah, rules. Aaaah, rules – well, we wanted to break them.’ 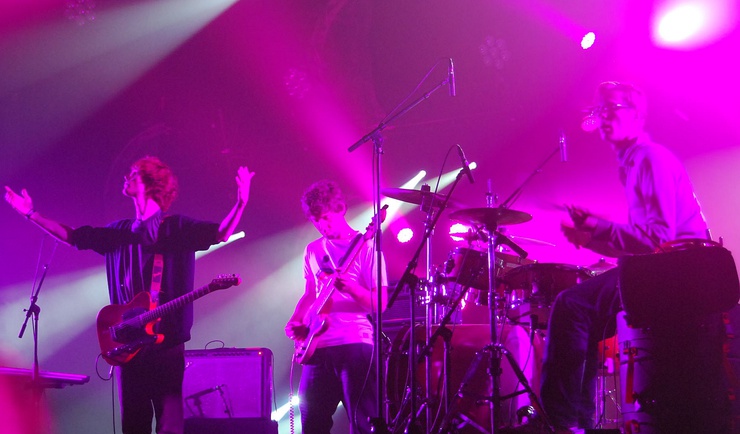 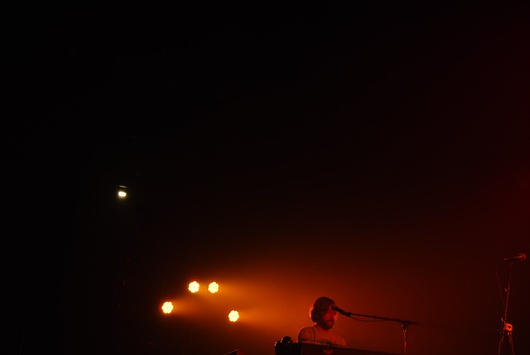 Onstage, it’s a challenge to acclimatise to different rules; watching The Whitest Boy Alive at 20.30 in an enormous hall whilst fans continue to queue in the December rain. It's more awkward that they are followed by the likes of British singer VV Brown – a programming misunderstanding, the German tour manager assures us. It feels like a gigantic tea party, yet it doesn’t hold the mellow crowd back from screaming out for the first track released from their second album, Island. Nentwig cosies down behind the synth with shoes off and Maschat controls his drumsticks with the precision of a doctor, permissibly halting the show at one point to attend to his medi-musical bag of electronic drum accessories. Öz follows his lead loyally, pouring out the bass melodies whilst gazing at the ceiling, often turning back to back with Øye, who is the real showman of the four: he raises his arms and nods often, before dispersing of the arrogant illusion with his beautiful calming voice. At one point, he drops his guitar to produce a fuss-free, post-modest ass boogie at the stage’s edge, celebrating his scrawniness all over the stage, and cooing to his crowd, who coo back contentedly. ‘What are we, in the north of France or something?!’ he teases them in between songs. ‘We’re all happy aren’t we? There’s no war in the world, you’ve got dinner on the table, and you managed to buy tickets for the show tonight.’