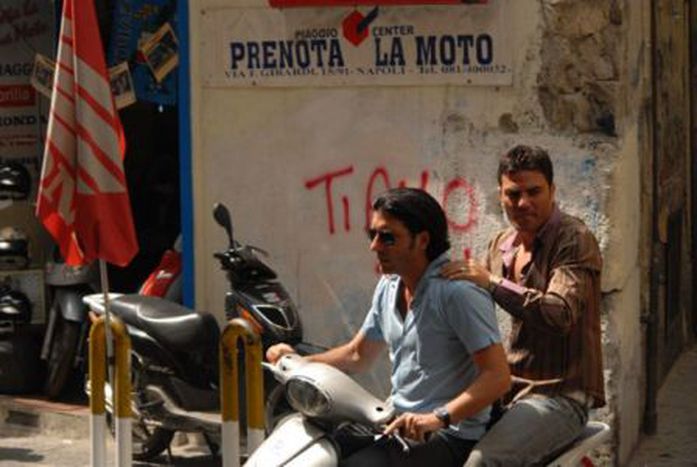 This year, one of the major cities of southern Italy has probably scored a record amount of media coverage (the IDFA has at least two other movies dedicated to it). Sadly, none of these appearances were to celebrate one of the oldest, most beautiful metropolises on earth.

Quite the contrary, Naples has become the very symbol of the status which whole of southern Italy is sinking into: the crime, the garbage, the collapse of the House of the Gladiators in Pompei. Why Naples is so messed up might seem like a generic, socio-political question which could equally be applied to any other difficult area in the world. Yet the uniqueness of Naples is that it is also one of the most important cultural centres of Italy: despite the violence and third-world poverty, creativity also flourishes in this milieu as in no other place in the world.

Abel Ferrara, the grandson of an Italian man from Naples, had been planning something on his place of origin for years; the opportunity came thanks to Gaetano Di Vaio, a Neapolitan filmmaker who first started the project for the documentary. Ferrara was born in the Bronx, and his debut feature film was a porno called 9 Lives of a Wet Pussy. Di Vaio comes from Scampia, the northern slum of the city, and he is a former criminal. It is no surprise then that they went looking for answers straight to the lowest of the low: women in jail for drug dealing and robbery, who did nothing but live up to the basic expectations their environment could offer.

There is no victimisation though, no pity in Ferrara’s portrayal, which gives explanations but no justifications, showing how many others in the same situation have been able to escape the moral degradation and to stay and help the city. All of the latter are regular citizens, as the state did nothing but damage in trying to cure the many diseases of Naples. The story of Scampia, which was meant to be a council house estate but ended up as an open-air jail where unemployment reaches 70%, is the symbol of this inadequacy (or complicity).

It is too bad then that to this lucid analysis, free from stereotypes and conciliatory words, Ferrara decided to attach docu-fiction inserts about three Mafiosi going to kill a traitor and a man spending all his money on illegal gambling and prostitutes: a dive into everyday life in the alleys, but also as fake as it gets in a work that could have had the big merit of showing the truth about Naples from the eyes of the people who are living it.

READ ALL THE IDFA 2010 COVERAGE ON WWW.NISIMAZINE.EU