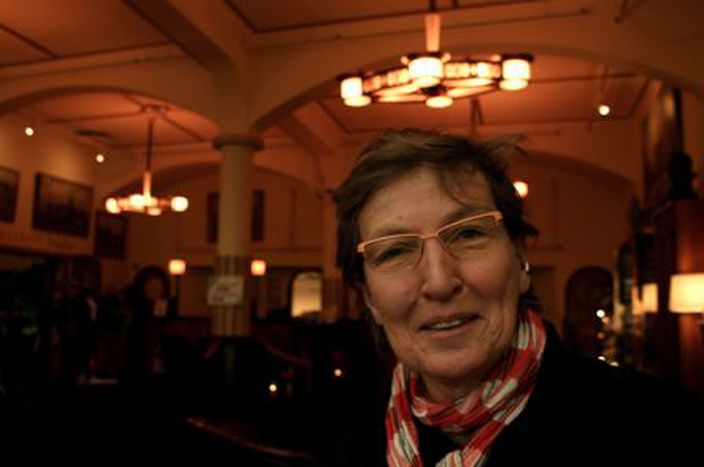 IDFA 2010 - Portrait of Pirjo Honkasalo: "The more in the margin the better"

Finnish director Pirjo Honkasalo is a rebel. You can tell immediately by her fierce blue eyes and determined walk. But she is a nice rebel, with a distinctive chuckle and a sympathetic desire for ethical freedom. She has been invited to the IDFA to introduce a retrospective of her work, having already been awarded at the festival in 1996 for her film Atman.

She is also presenting her top ten documentaries. Exploring a cinema which addresses the senses, she follows her quest for humanity off the beaten track.

Pirjo Honkasalo started to study cinema “to avoid studying mathematics”. When her whole family encouraged her to follow their path in engineering, she chose to enter a film school. She never worried about crossing borders between documentary and fiction while making a movie. She was not taught to do so, and does not see the point: “When the critics look at the movies, they want to make the frontiers so clear. When you are a filmmaker, what you deal with is so much more important to you. You are dealing with the same themes in documentary and fiction.” On the contrary, the audience does not show any interest in these boundaries, as long as they are moved by the film.

Not one to follow the most common approach, Honkasalo doesn’t look at the outside world for inspiration. Her topics are her most inner worries, which determine her upcoming research. She has been looking for answers by travelling all around the globe, from Russia to Japan. Although in the end, people are the same everywhere. Of course the beauty of the work as a documentary filmmaker is to get to know them, even though she never does when she starts shooting. She claims: “I don’t know their life stories, and I am not a storyteller”. The protagonists construct their stories on their own, with no need for a script. That is why it is necessary to be so careful when you choose the main subject. About Ito, a character in The Diary of an Urban Priest, the director explains: “I saw his charisma. When I am convinced this is the right person, then I can start. It is completely the opposite of how they teach you to prepare at film schools”. It is important that the person who leads the narration presents this special mix of modernity and ancient inner language. Ito has preserved other ways of thinking: “He is at the same time the past and the future”.

Then, even more than stories, her films are a “structure of emotions which, mingling together, form a language”. Honkasalo defends the idea that pitching a film is absolutely dangerous: “I would like to have a T-shirt where it is written: ’I’m a bitch, I don’t pitch’”. The principle of reducing a film to one singular meaning is a way of simplifying people’s minds. “I can’t have a single message because I wish that the message is different for every viewer”, she affirms.

When a film is over, it is hard to leave the people she has been living with for two years: “Then the question is how much do I continue to be in their lives?” The film is always shown to them, and they can react to it. “In Three Rooms of Melancholia, Hadhizhat wanted one picture out. It showed a man in her house who, after the time I was shooting, had joined the terrorists. She was afraid that she would be associated with the terrorists. Of course I took it out.”, remembers the filmmaker. Thus, the final cut is given special thought. Three Rooms of Melancholia was a coproduction with Americans, who “consider the film as a product and not as a work”. They think they own the film because they gave the money for it. Honkasalo refused the collaboration when they denied her the right of the final cut, her argument being that “If I choose the people and they trust me, it is immoral to give this right to anybody else”. There lies the only real difference between fiction and documentary according to Honkasalo. A documentary demands more ethics than fiction: “You cannot use ordinary people and make them represent something they don’t represent. If I pay an actor, it is not my business if he is divorcing or whatever. What a character does in a movie doesn’t affect her or his life. The only ethical thing in a fiction film is the content, it doesn’t concern the people who are in the image.”

Throughout her long career, Pirjo Honkasalo has been making as many fiction films as documentaries. She was 29 when she shot the most expensive movie ever made in Finland. “When you are young you always spend energy on everything that is not important. It becomes so heroic to run this machine with all these languages and the crews that you forget the most essential, the movie itself”, she admits. Now the director wants to go back to low-budget, which allows more independence and freedom: “The more you are in the margin, the better”.

Imagine every quote punctuated by a thunderous laugh to have a better idea of the lady. This laugh is rebellious.

READ ALL OF OUR IDFA 2010 COVERAGE ON WWW.NISIMAZINE.EU