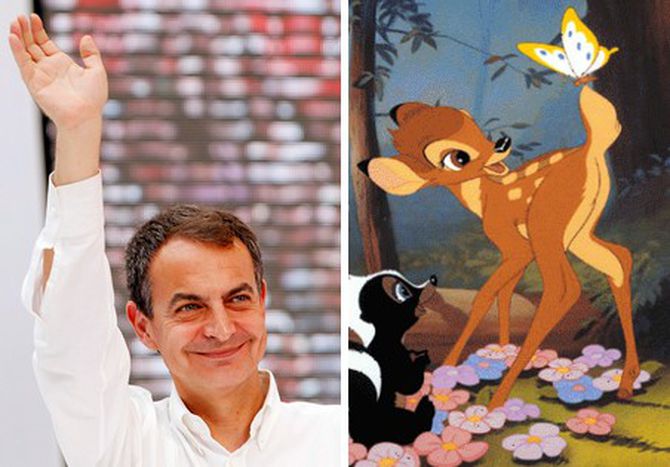 Iberian, Italian and German press on: No Zapatero for Spain 2012 election

On 2 April José Luis Rodríguez Zapatero, prime minister of Spain and the leader of the Spanish socialist workers' party, announced that he will not run for re-election next year. Zapatero leaves with dignity, but his policies were dashed on the rocks of the economic crisis, Europe's press writes

'You can't always be the best striker' - Público, Portugal

Despite all the criticism of Spanish prime minister José Luis Rodríguez Zapatero's policies, he steps down with dignity, the Portuguese daily writes: 'He is accused of having reacted too late and not always appropriately to the financial crisis. And also of having taken progressive left values too far - in a country that is still very much captive to catholic archaism. But he departs with an invaluable advantage: having recognised that 'you can't always be the best striker'. And that there comes a time when letting go of power is the best option for one's party and one's country. Even if the right never forgives him his social agenda he will be judged by how the financial crisis progresses. But whatever happens, the dignified, sincere and altruistic way in which he decided to give up his power will help restore his prestige with the Spanish public'

The announced resignation of Spanish prime minister Zapatero is the consequence of the economic developments and his plunging popularity, the liberal-conservative Italian daily writes: 'Bambi - the nickname given him by the opposition because of his doe-eyed face, which became the hallmark of his success - leaves behind him a clear yet not indelible trail in Spanish history. The Spanish were keen on Zapatero's gratis right-wing socialism because after the long night of the Franco regime a little freedom and cultural development gave them the feeling of finally having entered the age of modernity. But this wise and pragmatic nation which was willing to back Zapatero as long as the economy was flourishing is ready to get rid of him now that the economy is tumbling following the collapse of the property market and the banks, the true motors of the Zapatero miracle' (Antonio Polito)

Spanish prime minister Zapatero will remain in office just one more year before stepping down. Although he will be a 'lame duck' until then he can still do much for Europe, writes the German conservative daily: 'This period may well see dramatic decisions being taken. Should Portugal soon need to seek help under the EU bailout plan, Spain, with its strong financial ties to its neighbour, will not remain unaffected. With unemployment at more than twenty percent, Spain is already going through precarious times. Despite demanding early elections, the conservative opposition can be happy if the prime minister really does remain in office 'to the last day' to wind up the thankless but unavoidable reforms and austerity measures. Zapatero was partially responsible for the crisis, which he first failed to recognise and then long denied. His doing the right thing now to get Spain out of the quagmire will help his European partners, too' (Leo Wieland)

Like his conservative predecessor José María Aznar, the socialist prime minister Rodríguez Zapatero will remain in office for just two legislative periods, thereby creating an unwritten law, the Spanish left-liberal daily writes: 'After Zapatero's announcement and that made by José María Aznar during his day the future presidents of the presidential palace La Moncloa will have a hard time breaking with the unwritten law that two terms in office is the maximum time in power. If this practice is consolidated it's better that it happens in this way - by democratic tradition - than if congress were to pass it by law'