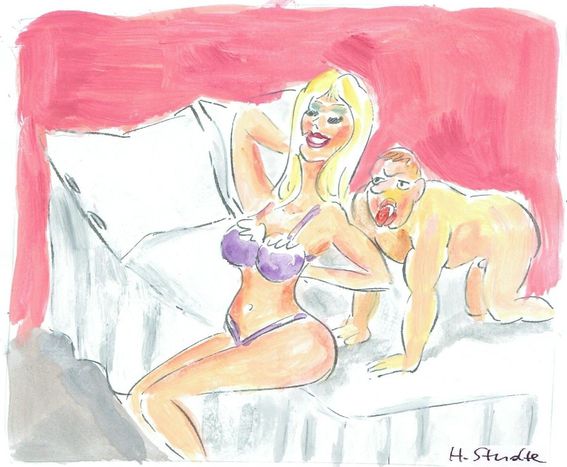 I wouldn't kick him or her out of bed

What does British actor Robert Pattinson share in common with the American (and Danish originating) actress Scarlett Johansson? Well, the majority of their European fans 'wouldn’t say no' – and would probably cover them in saliva or compare them to a chippie van, if we were to take their sayings literally

It’s a hypothetical question, but imagine if Pattinson or Johannson were to come and perch on the edge of your bed. ‘I wouldn’t say no,’ a Polish fan would purr (nim bym nie pogardziła). A German fan 'wouldn't kick him/ her out of bed’ (Die/ Den würde ich nicht von der Bettkante stossen) - a phrase you’d never dare to utter in front of a star’s face, but which makes up plenty amongst gossiping groups of friends. The slang term in English is I wouldn’t kick him/ her out of bed for eating crackers, a reference to not minding if a mess was made by eating biscuits in bed. If you want to take the imagery even further, what could be more tolerance-testing than 'I wouldn’t kick her out of bed for farting?'

The Spaniards would react in a similar situation with a severe bodily instinct: ‘You are so hot I would cover you in a coat of saliva’ (estás tan buena que te haría un traje de saliva). The French, food lovers, cry ‘She’s as hot as a fish and chips van’ (Elle est chaude comme une baraque à frites). Translated literally as it is, it sounds like the dodgy end of a compliment, but the phrase actually comes from a French comedy called Podium.