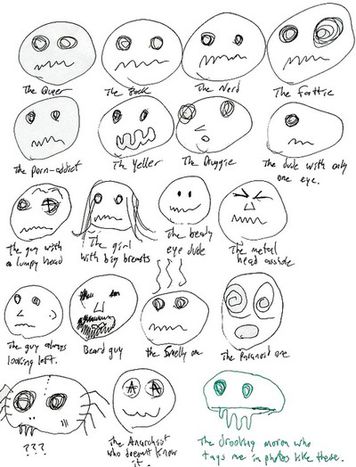 More than 250 million people have registered themselves on Facebook. This spectacular number will soon be surpassed; the social network is growing at a rate of 5 million users a week. Nonetheless, the giant is not unstoppable. Its critics are also multiplying, and some are choosing to log off the network for the final time

'I can't bear these supposedly funny photos, those comments underneath reading 'lol' or 'lmao'. Such abbreviated communication only gets across one message; a loss of ability to express oneself, the need for a minimum of complexity.' So says Carolin, a German musicology student who has just spent her Erasmus student exchange year in Paris.

Neither with or without you

Carolin closed down her Facebook account one day after opening it, but it wasn’t long before she went back. 'Although I don’t like having my details published on the internet, I didn’t want to miss out on the possibility to communicate quickly and easily with my friends in other countries. I have to try not to waste time absorbed with Facebook.' Carolin is not an isolated case, the testimony of internet forums shows many who refuse to join Facebook. The main reason seems to be a lack of security and privacy.

The French writer and journalist Francis Pisani, who is now based in San Francisco, is an expert on information technology and has been writing the blog Transnets for French daily Le Monde for over five years now. He talks to cafebabel.com about his disappointment with Facebook: 'I don't think it protects your privacy enough and that’s why I stopped using it for a while. I want more control over who has access or not to my details.' An adequate selection of the content we pour into the network can be the key. 'I believe we will have a different relationship with our private lives in twenty years time. If [you're a presidential candidate] in the United States, if they know you’ve got drunk, been unfaithful or taken drugs you can lose the presidency.'

The lack of privacy is not the only worry. During a recent interview for Britain's The Daily Telegraph, the Archbishop of Westminster, Vincent Nichols, maintained that social networking sites were ‘dehumanising’. He caused controversy by linking the use of networks such as Facebook or Twitter with the suicide rate of young people, attributing it to what he described as 'trauma caused by transitory relationships.' The reply was quick to arrive; the American Evan Williams, Twitter’s head honcho, hit back against Nichols’ words, declaring it 'the type of stupidity that comes from someone who isn’t familiar with social networking sites.' After the condemnation from the church came that of the military, but for quite different reasons. Facebook has been banished from the Pentagon. From the beginning of this month its workers and members of the Marines are forbidden access to social networks for security reasons.

For most, however, the reasons are simple. Spanish blogger Ponzonha sees it like this: 'If I want to know something about a friend, I ring him and he tells me. I don’t like finding out about things via a social networking site, especially when everything that’s said is nonsensical drivel and gossip, which is not the least bit interesting to me. I suppose that’s why they’ve created little games and puzzles; because it's so boring. Neither am I tempted by the thought of meeting with the jerk from secondary school, primary school or work, ever again.'

Among the games and applications are innumerable quizzes that invite us to try and figure out which character from the Simpsons we are most like, or what type of person we are. For Carolin these are 'inanities pushing a debased psychology, a simpleton's solution for a complex phenomenon.'

'Facebook is the fourth or fifth largest country in the world; but everything lives and dies'

Facebook is a reality from which it is difficult to escape. Despite their criticisms, Carolin and the Ponzonha blogger fell back into the networks. 'I’m not a fundamentalist, I can change,' they justified. Its potential for growth, with the expansion of the internet in China (blocked currently, but China is the country with the highest number of surfers in the world) India, Brazil or Mexico, is very real. Facebook is 'the fourth or fifth largest country in the world; but everything lives and dies. It opened an important space and it’s about to grow, but empires do fall,' as Pisani would have it.

In July 2009, Bill Gates, head of another empire that might have passed its glory days, has announced his departure from the social network. One of the problems he cites is the difficulty of identifying true friends from among the ten thousand requests has received. Not a problem, however, that is likely to become endemic, at least not among the rest of us mortals.