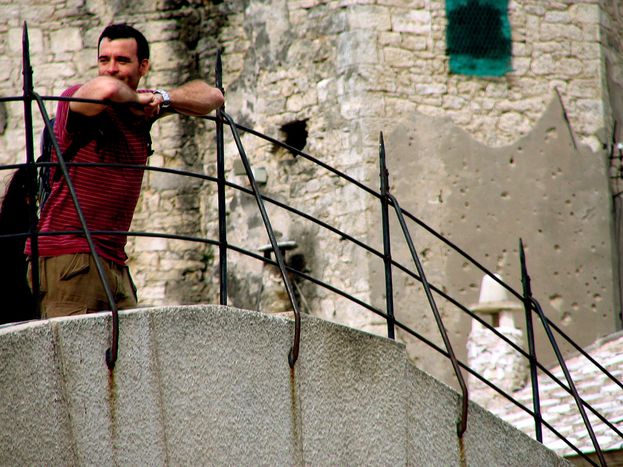 I like Mostar: are there really no tourists who want to go to Bosnia?

Mostar and I go back a long way. Ours is the story of a missed encounter – in 1998. Fast forward to September 2011: cafebabel.com organises the annual network meeting in Dubrovnik. On learning that the city is only 150 kilometres away from Mostar, I decide to revisit the city I never reached

In January 1998 I took part in a study trip to Bosnia, three years after the Dayton Accord officially ended Bosnia’s three and a half year long war. On the road between Sarajevo and Mostar (130km from the Bosnian capital) a bus caught fire, NATO’s stabilisation force SFOR came to the rescue and Mostar remained just a name in my memory. This is a story of bridges: the one I did not see in 1998 and the ones I discovered in 2011.

Dawn voyage for a one-hour visit

I am getting up at dawn so as to get the bus to Mostar. There are almost three hours of travel ahead of me. Once I've been relieved of 88 kunas (about £10 or €12), I enquire about return times. Consternation: there is only one bus scheduled to return at 12 noon, while my bus is scheduled to arrive at 11 am! Yet my guide said that there were several buses going in both directions each day. Can someone please explain the point of setting up a bus route which only allows for a one hour stay? If you wanted to put travellers off going to Bosnia, this would be the way to do it. Luckily I manage to get my ticket reimbursed without any difficulty. On top of my nagging feeling that fate is doing its best to come between me and Mostar, I can't help wondering: is this journey then not worth it? Are there really no tourists who want to go to Bosnia?

The route to Bosnia takes us along the magnificent Croatian coast, made up entirely of turquoise waters, olive groves and vineyards. These natural treasures aside, the route also presents you with the notable curiosity of having to cross borders three times: from Croatia to Bosnia, back to Croatia, and finally back to Bosnia again in under thirty minutes. The culprit in this game of jump-the-border is the Neum enclave. The geographical anomaly is the result of a territorial agreement concluded with Bosnia after the Croatian war of independence (1991-1995). This coastal strip is now Bosnia’s only point of access to the sea but it divides the Croatian territory in two. The construction of the so-called Peljesac bridge linking the north to the south of the country began in 2005 under the pretext of circumventing the enclave and helping drivers avoid unnecessary border formalities. It is an extortionate project which you wonder if they could have maybe done without. The 1998 Neum border agreement stipulates that the two neighbouring countries would negotiate transit facilities for the vehicles crossing the Bosnian territory on their way to and from Croatia. Border co-operation or 'balkanisation' – a choice has to be made. 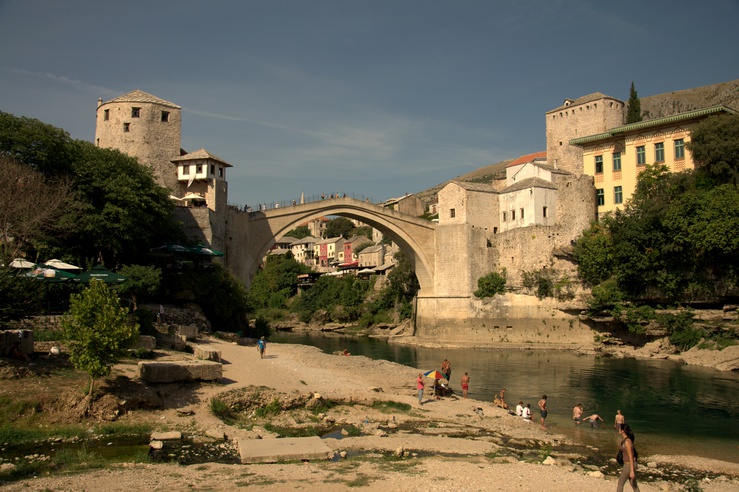 Looking at my travelling companions, one question bothers me: why did we decide to go and get lost in Mostar? We had decided to go and get lost in Mostar because of its bridge, of course, because the fate of Stari Most (whose name means 'old bridge') is inextricably linked to the political history of the region. Even back in 1998 I had wanted to go there for its bridge. Or rather, the absence of it. I was supposed to analyse the divisions which had caused the civil war. The ruins of the 'old bridge', which had fallen victim to the ongoing urbicide, were emblematic of these divisions. On 9 November 1993 the bridge collapsed under the artillery fire of the Bosnian Croat militias and the city was divided on the basis of the ethnic and religious loyalties of the communities which made it up (catholic Croats in the west, muslim Bosnians in the east). In 2011 the bridge stands once again, identically rebuilt thanks to funds from an international community, which no doubt sought to ease its conscience after having been powerless in the face of the violent dismemberment of former Yugoslavia. 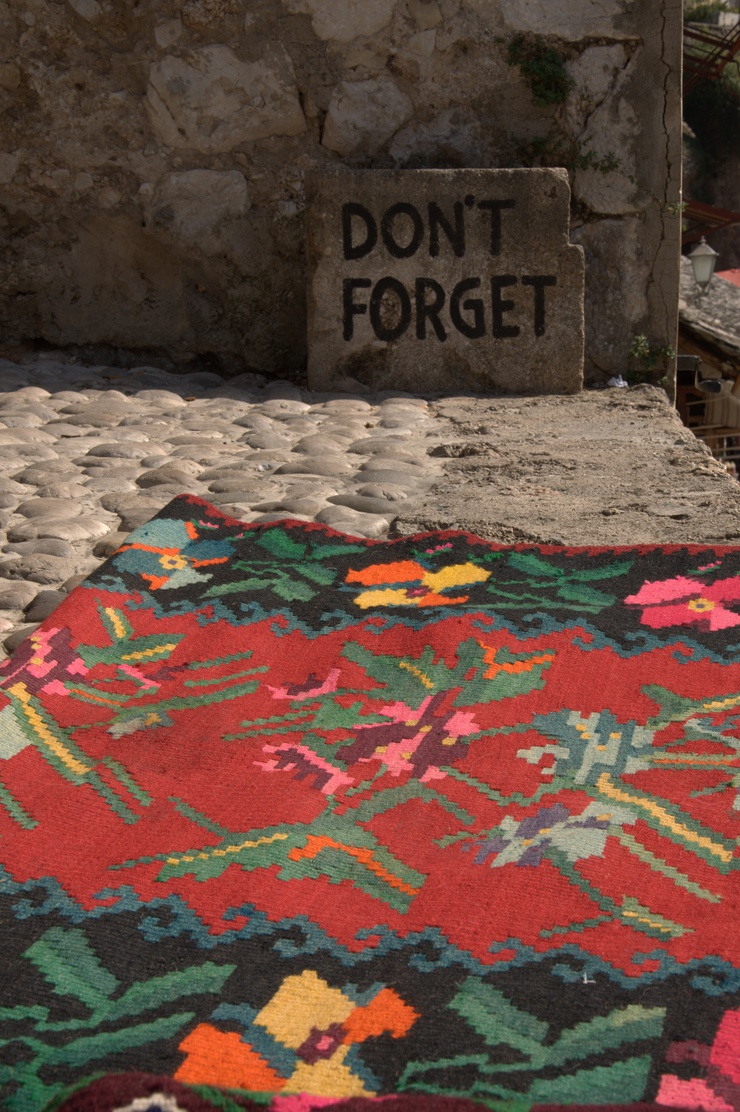 This gesture seems futile when you know that Mostar still has a dual administration (local services, postal service, educational system) and 'ethnicised' football clubs. Walking down the 'Bulevar' – a former line of demarcation between the two communities that confronted each other during the civil war –the conflict is still engraved on every building front. We notice the same thing when we escape from the overly tidy, almost-too-sleek historical centre. The contrast is striking: baroque façades blanketed with trees versus concrete buildings riddled with bullet holes. And there are other inescapable symbols of the rivalry between the two communities: a gigantic cross on the hill at the entry to the city marking the Croatian territory; 'Tito we love you' inscribed on the oriental/muslim hills; an outrageously tall concrete church tower (by the Franciscans) built to dominate the minarets of the mosques which have also been rebuilt. Is it even possible for the people living here to move on in this kind of environment? Don't the amounts of money invested in the reconstruction of a bridge and religious buildings seem indecent to them when their everyday needs aren’t even being met?

'If people live together nowadays, why do they still speak of Croatian neighbourhoods?'

Nevertheless, the message which our local guide hammers out wants to be positive: today people live together, she insists. Yet if that is the case, why do people speak of 'Croatian neighbourhoods' or the 'old ottoman/muslim city'? Is this how they spoke before the war? Goodbye shared cultural heritage, hello identity assertion. My guide even admits that Bosnia no longer has a government and the three-headed executive is paralysed. It's a bitter observation which seems to confirm the idea that the symbolism of the 'new old bridge' remains a hollow one.

In Dubrovnik I had the feeling that the past had been repressed: the wounds of the 1991 siege have become invisible. In Mostar, the past still takes up too much space. Maybe I will return to the largest city in Herzegovina in a few years' time. Will we then speak of something other than the old bridge spanning the green waters of Neretva?