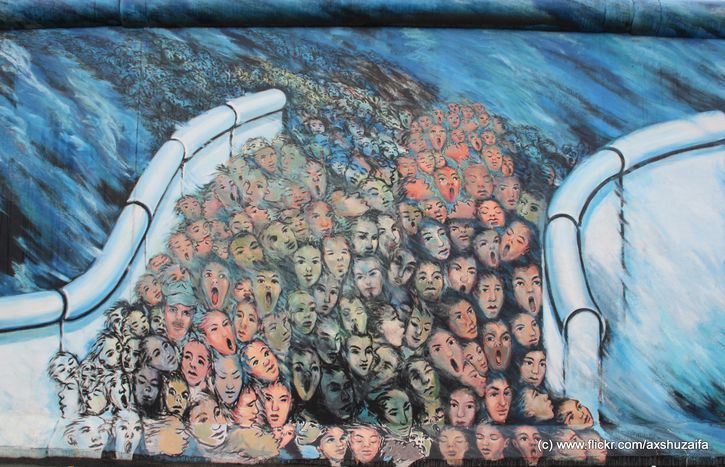 Hungary plans to close its borders to refugees trying to enter the country via Serbia by building a four-metre-high fence, Interior Minister Peter Szijártó announced on Wednesday. Europe's borders need to be protected, some commentators write approvingly. Others criticise that 25 years after the fall of the Iron Curtain, Hungary of all countries is putting up a new wall.

The fact that the fence is to be built on the Hungarian border of all places is incomprehensible, the liberal daily La Stampa observes in dismay: "On a Sunday in August 1989, the fall of the Berlin Wall began in Hungary. Fearful and incredulous, 300 East Germans crept through a tiny hole on the border with Austria towards the future and freedom, while the Hungarian border guards turned a blind eye. No one would have believed that just 26 years later Hungary, with its deeply symbolic past - the country where the uprising against the Soviet Union took place in 1956 - would build a new wall. … It won't be an Iron Curtain. But it will be a wall of shame, a racist wall of ethnic discrimination. … If Europe doesn't find its way back to the spirit of 1989 other walls like Orbán's will be built - high and thick, just like those in the heads of too many Europeans." (18.06.2015)

The plans for the construction of a new Iron Curtain are an overreaction and completely unjustified, writes the business paper Világgazdaság: "In a country where the fall of the Iron Curtain serves as a symbol for the end of dictatorship, putting it back up is a particularly telling decision. ... The Iron Curtain is the most drastic solution to the refugee problem. But it only makes sense to erect it if it can provide a true solution. ... The 175-kilometre border fence is a completely exaggerated reaction to the otherwise real problem of illegal migration. ... It is not at all justified by the current number of migrants. And by the looks of it the fence will be incredibly expensive." (17.06.2015)

The Schengen Area can only function if its external borders are protected, the left-leaning daily Pravda comments with an eye to Hungary's plans to erect a border fence to keep out refugees from Serbia: "People in need require help. One of the solutions with which the EU could assume joint responsibility would be the quota model. But far more fundamental is the strengthening of its external borders. When control of the Greek-Turkish border was tightened in 2012, the number of refugees dropped significantly. They then headed off toward Bulgaria. But when Sofia decided to build a fence along the border with Turkey the number of refugees dropped once more. ... Now come the plans by the Orbán government. People will increasingly say that the old continent is becoming a fortress. But the means at Europe's disposal [for refugees] are limited. This issue isn't just about our hearts, but also about common sense." (18.06.2015)

It is both wrong and dangerous for Europe to take in refugees, writes the director of Prague's Václav-Klaus Institute, Jiří Weigl, in a commentary for the news website idnes.cz: "The problem of poverty and regional conflicts can't be solved by shifting the affected people to the richest regions of the world. The exodus must be stopped, not stimulated. Moreover, it's immoral to take opportunities away from the poor countries by siphoning their elites off to Europe. ... The argument that Europe will age and die without immigration fails to convince. Otherwise we wouldn't have over 50 percent youth unemployment in Southern Europe. ... It's time to help those countries on the Arabian Peninsula that are still functioning so that the refugees can stay in the region. The rich oil monarchs bear more responsibility for the victims of the conflict - in which they themselves are involved - than far-off Central Europe."  (18.06.2015)