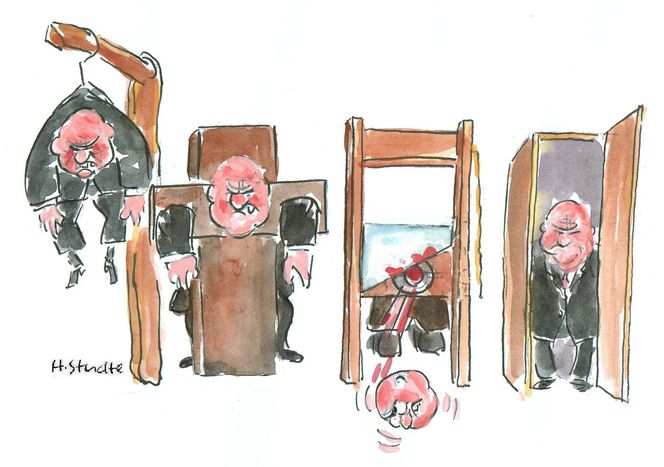 Hung out to dry

Mutiny! Political culture is one funny subject in the European Union. Whilst one poor English politician’s body is likened to being hanged from a tree, a French one is being popped in a cupboard whilst the Czech media can’t even translate the sense of the term when covering the story, so rife is corruption. Idiom of the week

Ever heard of the French politican who was mise au placard – literally, put in the closet? It means something quite different to its likely antonym coming out of the closet. In professional terms, it means having your power neutralized of sorts so that you are far from the important decision making processes, condemned to ostracism (condenado al ostracism) in Spanish. Italians are simply cut out (tagliato fuori), but the English and Polish language equivalents of a person being rendered powerless is by putting them on the sidelines (odsunąć na boczny tor), from the original sports context.

You can also be put out to graze, like an animal. A darker animal theme was prevalent in an internal British affair of late, when Britain’s former immigration minister was hung out to dry, one fellow labour MP complained – Phil Woolas was punished with three years out of office after having smeared his opponent during the 2010 general election campaign. The phrase is based on the practice of hanging a dead animal in a tree to dry its meat. The Czech media were amazed by the story of the ‘unlucky’ Woolas: imagine a Britain where a politician is punished! In the Czech Republic, one liberal daily editor claimed, ‘lies and slander were a matter of course’.

Polish politicians might know something is already wrong if they’re called out onto the carpet (wezwać na dywanik) for their role in any lies or slander. Yet carpets, cupboards and animals aside, much comes to focus on the figurative European head. Spanish justice minister Mariano Fernández Bermejo was put on the pillory (poner en la picota) after having gone hunting with Judge Garzón, despite a conflict of interests with both being on opposing sides in the Gürtel corruption allegations. As being fired means putting your head put on that guillotine, Bermejo took the easy option. He resigned. The Germans refer to the guillotine both directly (unter die Guillotine kommen) and indirectly; someone is punished by being made a head shorter (jemanden einen Kopf kürzer machen). Heads will roll! cry the illustrious Brits, though for the Spaniards these might just be Turkish heads – the cabeza de turco is the poor guy who pays for the crimes of the powerful. Or maybe, until we make up our minds.