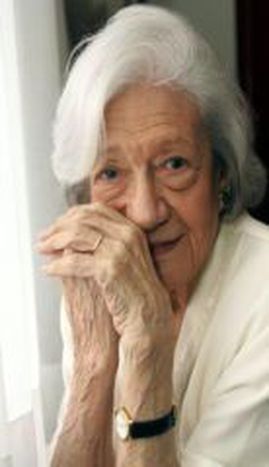 In the middle of a shower of applause, a good-looking, neat and little elderly woman goes up onto the stage. She is , the well-known Spanish writer, author of books for children and adults and Member of the Royal Academy of the Spanish Language. She comes to answer to our question: “” Pleasant and close, just after sitting down, she warns us with a sweet smile: “”.

Ana Maria MatuteWho will imagine us?I’m not hard of hearing, I’m deaf, and an absolute disaster as well, I’ve forgotten my hearing-aid again

This writer is not, and neither does she pretend to be, a scholar; she is, according to her own words, a writer. She tells us that she started to write because the world didn’t understand her, “”. In a slow, smooth voice, she speaks about the multiple realities that surround us and how, as we get older, we start losing our ability to move among them, how we lose the magic. That’s why she’s often written for children, “”. In spite of this, she says she’s grown tired of writing for children, now she looks for different things, she looks for the adult, who “”.

I thought, if the world rejects me, then I´ll invent a world of my own; I’m the second type of writers, those who are writers against their willNot because I like them, in fact I don’t, but because I’m interested in them, in their world, which is a round world; when you write for children, you don’t have to worry about their understanding you, because they always understand you, unlike the adultsis nothing else than what remains of the child, for good or for evil

She reads for us one of her stories about silly children “” and tells us something about her childhood of paper. Today, at 82, she continues to have two lives, a real one and another life of words, “- she tells us while laughing-, ”. Being a person who fears nothing, she opens her heart, “”. A “little hooligan” who hates getting up early, who takes naps and loves having a drink in the afternoon, surrounded by friends, a woman who “”.

El niño que era amigo del Diablo (The child who was the devil’s friend)one doesn’t exclude the otherhaving a life of paper doesn’t prevent you from entering the other life, which has such wonderful things as making love on a river of stonessometimes I live in words, but when I leave them, I become again the little hooligan I amunderstands better an elf than a bank manager

After making it clear that she’s not going to answer difficult questions about the future, “”, she leaves us a teaching: “”.

How should I know, son, how should I know what’s going to happen… people think that because you are a writer you have to know everythingI love life, I love it a lot, because we only have one life …or at least, so they say