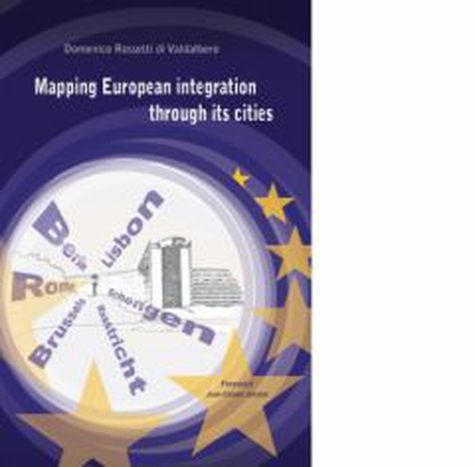 Article by Anna Karin Friis Domenico Rossetti, Commission official with DG Research, has put together a book of fragmented reflections on the history of urban development in Europe and its future challenges. He talks about how the conditions that have evolved over time, shape the present-day notion of cities, towns and even villages that have become symbols of EU integration.

Rossetti describes the urban development of 70 European cities and the challenges they face in his latest book 'Mapping European integration through its Cities'. Stressing the sentimental and emotional aspects of the cities’ development, Rossetti takes what he calls an often forgotten romantic and cultural approach to the history of European integration in the hope of “blowing the wind of European federalism”. Despite the commonly held opinion that Europe is becoming relatively less important in the global perspective, Rossetti emphasizes that the migratory flows show that many more people seem to want European quality of life than there are Europeans moving away. Although the EU’s 2020-strategy is blamed for expressing lethargy and being synonymous with stagnation, Rossetti declares himself in favour of the new strategy.

The symbolic significance of European cities

Since the mid-1950s, cities within the EU have expanded by 78% on the average in terms of population, whereas the population has grown overall by much less, some 33%. Some cities, and even small towns, have become synonymous with developments in European integration; e.g. Schengen is small, but known by all. 25 years ago, none of the 400 inhabitants of the village of Schengen would have dared believe that it would become synonymous with the free movement of persons in Europe. On the other hand, this concept of geographic locations symbolizing EU integration, has not always been recognized by leading European politicians; Margot Wallström, the former Commissioner in charge of communication, preferred to move away from the concept of cities in communicating European integration, a notion Domenico Rossetti challenges. The EU, i.e. the embodiment of European political and economic integration, originates in the Treaties. The cities of Rome, Maastricht, Nice and Lisbon carry the symbolic significance of the Treaties and impress the concepts that form the EU. The cities signify not only Treaties, but processes, agencies and political criteria, such as Barcelona, Bologna, Copenhagen and Köln. Also cities outside Europe are emblematic in this regard; Yaoundé, Lomé and Cotonou all mark significant agreements signed between the EU and the ACP countries.

In Rossetti’s mind, European cities are the gateway through which he approaches strategic concepts of European integration. Berlin signifies money and budgetary measures in the EU context, whereas Amsterdam symbolically stands for complex decision-making mechanisms, by the introduction in the Treaty of policy-initiation through Commission communications. It has evolved into an important basis for a policy-making process that on average takes four years, although its legal status is hybrid. Schengen and Frankfurt both symbolize the free movement of people and capital, whereas Stockholm is identical with development aid. The concept of subsidiarity is synonymous with Maastricht, whereas higher education reform corresponds with the city of Bologna. Of the cities in the new EU member states, Rossetti notes Warsaw for border security, Ljubljana as a synonym for freedom of knowledge and Budapest as the host of the European Institute of Information and Technology. Certain political figures are associated with certain cities; i.a. Jacques Delors with Maastricht, Loyola de Palacio with Barcelona and Altiero Spinelli with Rome.

Rossetti’s thesis is that today’s European cities are emblematic of the challenges of integration, mobility, social difference and poverty. European cities signify great centres of knowledge, such as Amsterdam, Cambridge and the whole German state of Baden-Württemberg. Then again, social inclusion is becoming more of a challenge. In Brussels, social disparities are visible within a range of a few hundred metres, and security is becoming more of an issue. Apart from the social challenges, there are the physical challenges of an increasing lack of water and the questions of waste disposal and of reshaping the energy matrix. The proportion of urban versus rural population has changed rapidly over the last decades and that trend is expected to continue. By 2030, 60% of the global population is estimated to reside in urban areas. Today’s share of urban population is about half of the global population, a development which has lead to greater social disparities. The proportion of the urban population living in slums globally grew from 3% to 18% in the last decade only.

The less densely populated the city, the greater the use of fossil fuel. Huge urban sprawls, such as Houston and Los Angeles, followed by Toronto and Sidney, show the greatest relative use of fuel for private transport. Hong Kong tops the urban density scale with the least proportional use of gasoline, whereas Moscow shows a relatively low rate of gasoline consumption, despite a relatively big area. The European cities of Amsterdam, Brussels and Stockholm position themselves between American and the Asian cities in terms of fuel consumption corresponding to urban density.

In short, Rossetti demonstrates that the EU is more than Brussels, Luxembourg or Strasbourg. But the use of statistics is incoherent, the comparisons confusing and the overall conceptualization seems inconsistent. Also, the argumentation is rather weak; exactly why European integration should be seen as Rossetti chooses to portray it, remains unclear.