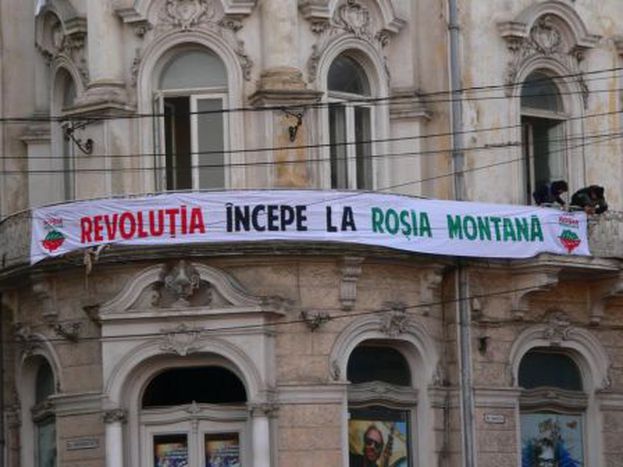 How a Romanian Gold Rush is like unprotected sex

By Andreea-Elena Serban At the edge of the European Union in the Carpathian mountains lies a slice of precious history. It's about to be wiped off the face of the earth using dangerous cyanide-based technology, to get at the precious gold underneath. It has serious repercussions for tourism, the environment and democracy in the European Union. But forget all that. We've got gold!

At the European Union’s edge in the Carpathians Mountains a beautiful, historically rich village is in danger. Rosia Montana is the oldest human settlement on Romania’s territory and one of the oldest mining sites in the world. It is about to be slowly wiped off the face of the earth by a Canadian mining company, Rosia Montana Gold Corporation, eager to exploit Romania's gold resources. To obtain the 2,7 million ounces of gold from the 108 million tons of ore, RMGC is planning to employ a cyanide-based technology - the oldest, cheapest and most dangerous available.

Brussels to the rescue?

On the 5th of May 2010, the European Parliament adopted a resolution demanding the European Commission forbid the use of cyanide in mining on EU territory. Having obtained 488 votes for and only 48 against, this resolution aims at encouraging the development of alternative technologies that would respect the environment. The EC has still not taken action. During a recent debate on the subject, Jo Leinen, chair of the Committee on the Environment, Public Health and Food Safety, said that mining with cyanides is like unprotected sex, “a brief moment of pleasure and long torment afterwards”.

Not all that glitters is gold!

Rosia Montana holds a priceless cultural heritage. Yet now, cemeteries and churches are being abandoned; houses rated as historical monuments are being left to tumble down, all having been bought by RMGC while there were strong promises invoking their protection and restoration. But it’s not just one or two houses a couple of centuries old that are being torn down or seriously damaged, it’s also some 7 km of Roman galleries, beautifully integrated in the natural landscape, (which is about to disappear too, but I’ll get to that in a minute).

All this happened after Rosia Montana area was illegally declared a mono-industrial zone, thus stopping its development in other fields. The Romanian minister for culture promised he would help get the precious archeological site from Rosia Montana listed on UNESCO World Heritage List, but he recently had a change of heart and said there were in fact no chance for that to happen. He affirmed that Rosia Montana was always a mining site and that’s what people have to start living on.

So forget about tourism, environmental friendly activities, and all that sustainable development nonsense. Mining is the answer! In 20 years’ time there will be nothing left except a lake about 600 hectares wide containing a high concentration of cyanide - the proud trace of the biggest open-pit gold mine in Europe. Four mountains will disappear. The water table will be contaminated. No plant or breathing creature will flourish in that perimeter. The impact on people’s health will be considerable, as heavy metals will be produced as a result of the technological process. Heavy metals accumulate in the body, therefore having a potential toxic effect. The 180m barrage holding the lake should last some hundred years. RMGC does not have an insurance policy against accidents or disasters because it would be so costly that it will make the business unprofitable.

Democracy? Who needs it? We’ve got gold!

This war has been going on for more than 10 years, but the most noticeable events regarding the project took place in the last months. The ministers are being hurried to give their approval so that exploitation can begin. The price for an ounce of gold is up and rising. The heads of RMGC are definitely losing patience. There is a massive RMGC disinformation campaign going on. The media has been monopolized. Public TV channels have been advised not to criticize the project.

As a consequence of all the marches and protests, there are serious plans to change the law regarding this aspect of public life (law no. 60/1991). Soon in Romania, there could be freedom of speech, but only with approval! The so-called “mine law” (law no. 85/2003) is also being altered to the point of unconstitutionality. This legislative project touches private property and national patrimony and it basically allows the discretionary expropriation of all the individuals who have the misfortune of living next to a mining site. Straight forward! With a clear “dedicated to RMGC” marked on it!

The issue has got the Hungarian neighbors quite worried! Illés Zoltán, the Hungarian minister of the environment, said he will do everything that stands in his power to create an European common front and stop this gold mine from opening. He received from his Romanian homologue an unrealistic environmental research report that lowered to almost zero the impact of the project on Hungarian borders!

The European Commission is also preparing independent research after two petitions were discussed the 4th of October 2011 at the European Parliament. A delegation is expected to arrive at Rosia Montana the 23rd of November to assess the situation. The subject remains open as the Commission affirmed that it is the Romanian state who has the power to stop or approve the project. However, there is a EC directive that stipulates the use of less pollutant technologies to the detriment of the more risky ones. Sweden is using a cyanide-based technology but in a close circuit which does not have the impact on the environment that open-pit mines do. So there are solutions to make the necessary evil less evil. Still, let’s not forget the resolution adopted with an overwhelming majority. Amongst its fierce supporters are the Romanian members of the EP Daciana Sarbu and Renate Weber. They have been insisting on the matter ever since, and criticizing the EC’s delay in taking action. The EC must respond sooner or later. Keep in mind that banning the use of cyanide will imply the halting of projects already in course!

Inspired by the Costa Rican example, the Romanians are fighting against immorality, corruption, disinformation, and oppression of their freedom of speech. Let’s wish them good luck!