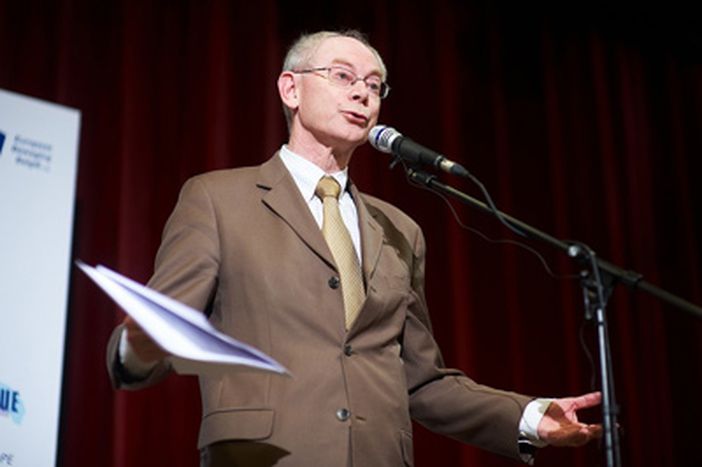 By Zoé de York  Translated by Joana Cansado Carvalho Since his election last November, Herman Van Rompuy has had the chance to master his office. After three months in charge, the former Belgian Prime-Minister came to present his work to the members of the Belgian European Movement. The President answered the citizens’ questions with prudence and a sense of humour.

A meeting with the first permanent President of the European Council ever is never cumbersome. In his quality as President, Herman Van Rompuy must take a stand and, now that the Greek government has officially demanded the help of the European Union and the IMF, his schedule is crammed. Despite that, the former Belgian Prime-Minister insisted on keeping his engagement with the members of the Belgian European Movement with whom he spent an hour and a half. In the audience, the younger generation mingled with the elderly and the press.

Herman Van Rompuy found himself on familiar grounds. The public, resolutely European, is Belgian and has known the permanent President of the European Council long before the French-German entente had made him the man of the hour.

The office of the first permanent President of the European Council is the outcome of a long story. The President recalled the most significant facts of this path (from the ‘Founding Fathers’ to the 2002 European Convention, through the doubt-ridden beginnings of the 1970s), before entering the core of his tale: the creation of the permanent Presidency, the veritable empty shell of the Lisbon Treaty.

«This office is not quite the office of a President, not even that of a Chairman, Mr. Van Rompuy says, in the sense that it cannot express a position on behalf of Europe without the previous consultation of the Heads of State; otherwise, it could damage the Union ». However, the Lisbon Treaty imposes upon it duties that supersede the role of a mere referee: it must take charge of Foreign Policy and Common Defence issues. According to the new President, another important aspect of his role is the summoning of the Council.

Herman Van Rompuy insists: there are few formal directives, « which is why I have established informal contacts from the beginning » with the President of the European Commission, José Manuel Barroso, whom he meets on a weekly basis; with the European Parliament, « even if I do not respond to the MEPs »; with the members of the Euro zone; and with the Spanish Prime-Minister, responsible for the rotating Presidency starting until next July. The first permanent President has even chaired, albeit informally, the Euro zone Council.

Regarding the Belgian presidency, Mr. Van Rompuy is not indifferent to the situation his country is currently living. The former Belgian Prime-Minister would welcome a resolution of this state of affairs as soon as possible, « not only for the Belgian interests, but because of European interests in general ».

Mr. Van Rompuy has also passed in review his achievements after the inaugural 100 days of his Presidency. The Lisbon strategy and EU 2020 took up the upbeat part of his speech, before coming to the Greek crisis: « An event that has imposed itself upon us, thus forcing us to take action ». The President then recalled the reply of the former British Prime-Minister, Harold McMillan, when a journalist asked him how he set about defining his priorities: « events, my friend, events ». And yet the President of the Council believes that the stakes are serious, since lurking beyond the Greek crisis is the possibility of the destabilization of the entire Euro zone. « The treaties do not foresee such a situation; there is no solidarity mechanism to come to the rescue of a country in such a delicate financial predicament ». 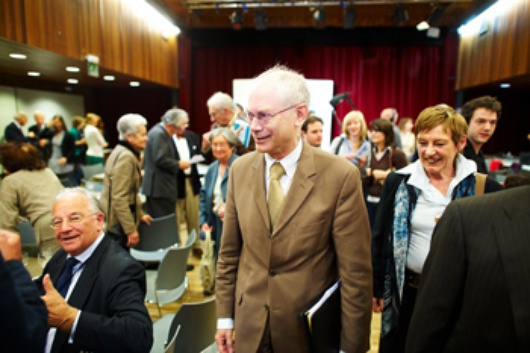 At the request of the Council, Herman Van Rompuy declares his aim to work to find « structural solutions to avoid and/or deal with such situations in the future ». He further adds that he looks upon this mission with the utmost gravity, while warning: the consequences of the financial, economic and budgetary crisis ensure that his term will be extremely challenging.

« Recovering a significant economic strength is a matter of survival for Europe. And we should do it together ». The permanent President states: « We shall not replace national structures ». The goal is thus to align the governments of the Member States, creating a platform from which to launch incentives towards an enhanced competitiveness regarding costs and products. He stresses: « We will not have even a shadow of a majority to substitute ourselves for the national governments, as we will not have a budget to replace the budgets of the Member States. We can extol them to reduce their deficits but, in the end, it is up to them to undertake the necessary measures ».

The new President also draws attention to the work of Catherine Ashton, namely concerning Afghanistan, on which the Union maintains a distinct position, while leaving some liberty to the Member States on the issue. Similarly, on Iran, « both big and small countries share a common position, and Iran is one of the major problems in our political world ».

According to Herman Van Rompuy, the Lisbon Treaty has not disempowered the European Parliament by creating the positions of High Representative and permanent President. In fact, the EP is expected to play a major role « in order to put in place a Foreign Service, we need an agreement among the three institutions. In addition, the Parliament has the budgetary power. It can therefore influence policy ». The former Prime-Minister takes the SWIFT agreement, which the Parliament did not ratify, as an example. Mr. Van Rompuy exclaims: « The Parliament is the grand victor of the Lisbon Treaty! », before recollecting himself:  « Obviously apart from the permanent Presidency ».