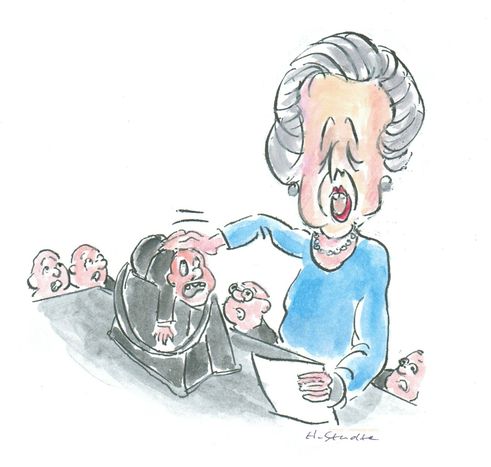 Handbag politics: Italian Thatcher would've eaten pasta from off the top of your head

To celebrate the former British prime minister's handbag fetching £25, 000 at a charity auction on 27 June, we looked for European equivalents to her famous 'handbag politics' to intimidate those around her. A German or Polish Thatcher would have used lyrical 'sleeves' and 'pockets' to put the pressure on you. Word concept of the week

It’s well known that Margaret is a saucy little minx (as fictional prime minister Hugh Grant put it in the 2003 film Love Actually). If she at all owned the nickname 'Iron Lady', the name given to her by the soviet newspaper The Red Star to highlight her anti-communist stance, the only female prime minister of the United Kingdom has more than one trick up her sleeve (or mieć asa w rękawie, pronounced 'mietch assa vrankaviyeh' in Polish) -  or more precisely, in her handbag.

In fact, Margaret Thatcher’s renowned black bag contained official documents which, according to the Daily Mail, 'terrorised ministers'. 'In important meetings, Mrs Thatcher would place her handbag in plain sight in order to show that she wasn’t joking,' wrote a British parliamentarian in 1982. As time went by, this practice inspired the term handbagging (or handbag politics). It can even be found in the Oxford English Dictionary.

The rest of Europe doesn't handbag

In Germany she would have stored her intimidation in her pocket instead (in die Tasche stecken). It is a soft option: austerity demands that handbagging reflect a rough, tough kind of style. The German expression jemanden verbal niederknüppeln ('to bombard someone') suits Thatcher's style better. The Italian Thatcher might just have mangiare la pastasciutta in testa a qualcuno, or 'eaten pasta off the top of someone’s head'.

Anyone trying to square up to Thatcher would have, in British, German and Polish tradition, been speaking to a wall (an die Wand reden, przyprzeć do ściany or 'push the wall'). All of these expressions reflect the individual’s opposition to change under the blows of an iron handbag. It's a kind of dead-end for which a Frenchman might use the verbs méduser (in reference to the Greek myth of the Gorgon, Medusa), pétrifier ('to turn to stone') or even scotcher ('to fix with scotch tape') to react to Thatcher's power.

In short, Margaret is better at holding her posture than listening. A symbol of authority from 1979 to 1990, the Iron Lady's handbag was auctioned at Christie’s on 27 June after Thatcher personally donated it. It fetched more than Winston Churchill’s dentures, which were sold last year to an anonymous bidder for just over £15, 000.

First published on cafebabel.com on 29 June 2011