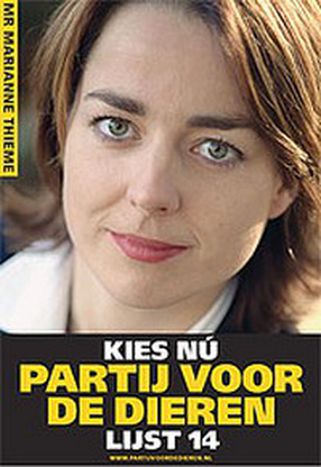 Whilst Dutch 'Party for Animals' may have seen its first representative enter parliament last June, other European politicians resist making animals their leitmotif

Small victories sometimes grow into grand ambitions. 'We believe that it's possible to create a pan-European coalition in the defence of animals,' says Niko Koffeman, the 'Party for Animals' (PvdD) MP most recently elected to Dutch parliament. 'The opportunity to achieve this together exists in Europe.' Without being extraordinary, the votes that the PvdD gained are significant in the eyes of many Dutch citizens.

'A movement like this could never lead the country, of course,' admits Evertjan, a student in Amsterdam. 'But the political world needs to know that the destiny of animals is not regarded with indifference by the Dutch.' But are other European countries prepared to follow the Dutch example?

Animals aren't completely absent from national programmes in the 27-state European Union. The Green party often come forward as the principal defender of the animal species. With 42 seats in the European parliament, the Green/ European Free Alliance (EFA) is the fifth biggest party in the parliament in Strasbourg – a position held almost constantly since 1989. The action they take for animals has become part of a bigger political 'manifesto for the living conditions of animals'. But is hideen behind a cloud of fog?

Strangely, those parties which explicitly refer to animals are usually those which least support the furry cause. For example, the French leisure hunting party 'Hunt, Fishing, Nature and Tradition' (CPNT) opposes industrial cruelty to geese, but raise no eyebrows at sampling their foie gras (literally the 'fat liver' of both duck and geese). They are against slaughterhouses, but feed the rural hunt with their horns and a flower in their rifles. The main problem with the idea of a political mobilisation for the animal cause is the one-sided directions of many parties. Their strategy is limited to the animal world, and sadly isn't enough to evoke the voter's interest.

In France or Italy, people show a strong tendency to highlight only very general political subjects. 'The big parties monopolise society's biggest questions,' agrees Michèle André, vice president of the senate. Niko Koffeman confirms this vision. 'The majority of European citizens hesitate when they have to choose political representatives from smaller groups, be it on a national or European level.'

It's not that Europeans aren't interested in the animal cause. Instead, many usually try to make the distinction between pure political issues and the battles of the associative world. An association like 'People for the Ethical Treatment of Animals' (PETA) is one of the most powerful in the world, which provides an effective voice for animals. Without a doubt, the presence of PETA ambassadors from the most 'beautiful species' explains this success: be it Grace Slick, lead singer of American late sixties rock band Jefferson Airplane, or Zara Whites, a former Dutch porn actress. The militant vegetarian made a half-naked appearance at the last 'Salon International de l'Agriculture', an annual international agricultural fair in Paris, covered in fake blood and wrapped in cellophane packaging.

If defending the cause means rejecting the violence and suffering inflicted on a fellow human, its political implication remains difficult and ideologically debatable. In the words of French historian Jean-Pierre Arthur Bernard, this principle of 'equality at every price' can be extended 'to vegetables and minerals, in the name of a fully democratic planet.'