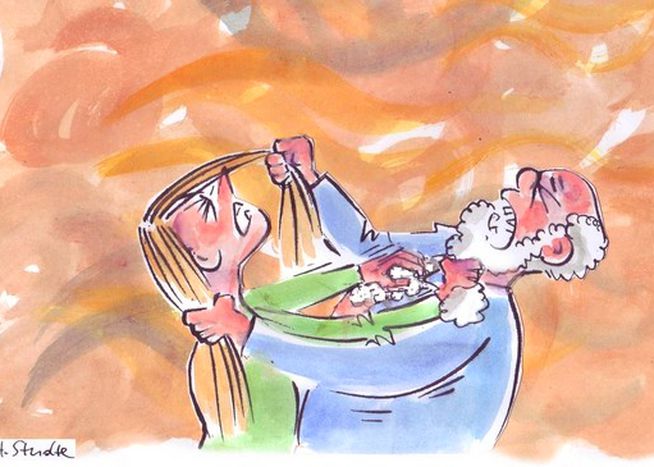 Why hairs idiomatically end up in your hand or in your soup in French,  on your tongue in Spanish and on your teeth in German - weekly look at pan-European expressions

Take good care of your hair

, because it can come in handy in lots of situations! Sailors in the fifteenth century could tell us a story or two about this. During long voyages, they never shaved or cut their hair because if one of them accidentally went overboard, his mop could save his life: the other sailors could get him back onboard by grabbing hold of his ponytail.

It is not unusual to hear a Spaniard say Me he salvado por los pelos!

(he has saved me by the hairs). At the very last moment, a Polish person might cry happily O mały włos!

(by a whisker!) when something only just ends well. A lazy Italian (Per un pelo!

(he who has un poil dans la main

– literally a hair in the hand, meaning ‘bone idle’), at the idea of a happy or surprise ending.

One thing is sure; our entire body is covered in little hairs. In certain languages, like Polish and English, individual body hairs and the hair on your head are expressed using the same word (włosy

Elsewhere, it’s a different story. The Germans have Haare

on their heads, but Behaarung

(fur) on their bodies; in Spain, pelo means hair, but the word cabello is used to signify head hair only. Complicated? Not at all! It is nothing but eine haarige Angelegenheit

(a long-haired business), as a German who is tearing his hair out would say.

Put hair in a debate, and the German who doesn’t have a hairy tooth (ein Haare auf den Zähnen haben

, is a quick-witted person who always needs to have the last word. A Spaniard or Italian on the receiving end wouldn’t find it hard to honestly say to him no tener pelos en la lengua

(to not have hairs on your tongue, or saying exactly what you think; 'don’t let your tongue be covered by fur'.) The French tend to poke fun at lispers though: Z’ai un cheveux sur la langue

(literally I’thve got hair thon my thongue). Might be cause for the poor lisper to turn up comme un cheveu dans la soupe (like a hair in the soup) namely, at an awkward moment.