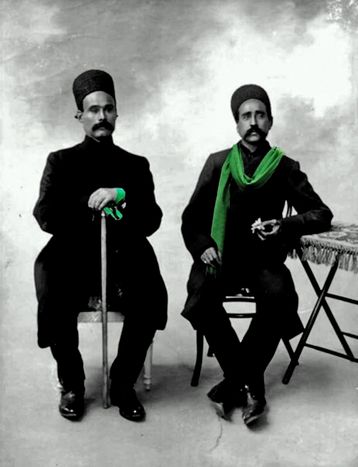 It is soon 18h30 as some 40 people are demonstrating in front of the European Court for Human Rights as a sign of support to the Iran people.

Whether they have been in exile for a long time, or are young Iranians who came to France to study in peace, or French citizens showing solidarity, they are all shocked by the brutality of the government which strengthens its repression every day. They have come round a rectangular table decorated with candles and covered with the Iranian flag in order to wear the colour green. As colour of Mir Hossein Moussavi’s campaign – the candidate of the opposition – the colour green has now become a symbol for the struggle of the Iranian people against the political system. Rashne was 20 years old when he left Iran. He is now 29 and has not seen his family since. He did not attend his sister’s weddings. Yet going back to Iran is out of the question for him as long as the Mullah government remains in power. “You have no liberty in Iran, it is like being in prison,” told Rashne. He was expelled from his football club because he did not how to pray. “Everything there is linked to religion,” he explained. You do not even have the right to walk with your girlfriend in the street. The police officers demand to see your identity papers and if you are not married, you end up being arrested.” The Iranians feel stifled under this cultural dictatorship, in Rashne’s opinion, a lot of them are more and more “disgusted” with religion.

Like all other the demonstrators who came today, he is expecting the international community to take a firm stand. After the first demonstration in front of the European Council at 13h30, the march reached the European Court for Human Rights in order to hold a sit-in with candles in their hands. On board signs that the demonstrators are carrying, you can read various slogans such as “We all are Neda”, “Where is my vote?”, “Stop massacres in Iran”, as well as “Ahmadinejad is not our president.” They all join in “Yar-e Dabestani,” a revolutionary song that the students used to chant in 1979 to protest against the Shah’s dictatorship.

“We need the international community,” explained the speaker of the Iranian Collective of Strasbourg. “We ask that Ahmadinejad is not acknowled as our president. And we want the European Court to condemn his violation of human rights in Iran.” For this young woman, the report adopted on Thursday morning by the Parliamentary Assembly of the Council of Europe is already a great victory. However, she laments the fact that the Council does not show enough “sternness.” She also fled Iran in search of liberty. In 1993, she arrived late at her university – 5 minutes too late. She sat amongst some boys and a Muslim student asked her to move and find another sit. The conflict between religion and atheism turned into a riot and Shireen, regarded as responsible for the altercation, was expelled from the university a few days later. “That really stunned me. I decided to leave and I swore never to come back again as long as the government is still in power.” For those Iranian refugees – as for many other people in exile – fleeing the homeland is a matter of survival. After the 1979 revolution, which ended the Shah’s dictatorship, being a musician was really frowned upon. Papak was 18 years old and the conductor of the symphonic orchestra of Teheran when he left for France. “France welcomed me but Iran remains in my heart,” explains Papak although he will not go back either. “I am sceptical about the future of my country for the repression is so strong. This future is in the hands of the Iranian people, for only they can over throw the government.” Unlike him, Rashne feels hopeful: “For the first time in 30 years, the people stands united.” It is soon 20h as the sun goes down on the European Court and demonstrators stand up. A member of the Collective speaks into the microphone to read a text of support which ends with a famous sentence by Ghandi: “First they ignore you, then they laugh at you, then they fight you, then you win.” With their arms stretched out skywards as a symbol for hope, everyone sings to the tune of the Iranian popular hymn that used to be sung during the Iranian revolution, “Ey Iran”.