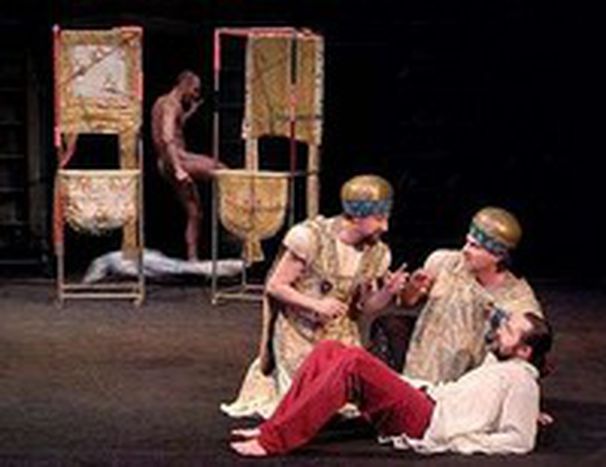 'Greek culture is as difficult as Greek language. Dealing with ancient theatre is a paradox - both experts and artists complicate it to illustrate the full complexity of it,' laughs

classics expert and HOMINI publishing house owner Krzysztof Kielecki. He's co-organising a series of performances, discussions and lectures presented by European artists in this year's 'Re_visions Classics' theatre festival. Based in one of Kraków's two most famous theatres, the Old Theatre (Teatr Stary), the Re_visions Classics festival kicked off in January in Krakow and runs until June 2007. It follows on from last year's 'Re_visions Romanticism' theme.

Alongside traditional offerings from Greek tragedians and dramatists such as Euripides's Medea, there is a play adaptation of Friedrich Nietzsche's book Thus Spake Zarathustra. The German philosopher played an unprecedented role in the contemporary discourse of Greek tragedy by discussing its role of in his essay The Birth of Tragedy. Experts from all over Europe such as Cambridge professor Simon Goldhill and Warsaw's Teatr Dramatyczny's former programme director Magorzata Dziewulska come together to celebrate classical theatre references in modern European theatre.

Go back to classic

With eternally long monologues and a supreme lack of action, Greek tragedies can be challenging to revitalise in contemporary theatre. German director Dimiter Gotscheff admits to having been discouraged. He is currently directing Aeschylus's The Persians at the Deutsches Theater in Berlin, which is also being shown at the festival here. 'I started to regret directing Persians,' he says, of tackling the oldest-surviving play in history. 'It had been three weeks already and I still hadn't started relating to the piece.'

But Grzegorz Nizioek, literary director at the festival, lauds the earliest playwrights of Western literature who established those very structures which modern artists still use today. The texts were 'born from different cultures, different ways of thinking about humans, different ways of experiencing fate,' he says. By turns, it enriches and fascinates the contemporary scene. 'European culture is thirsty for confrontation with the otherness of the classics. It sheds a strong light on humans – watching a character facing their catastrophe is far more extreme,' he explains. The classics well described identity problems. By reworking them, we can observe ourselves anew.

The festival draws a parallel with contemporary theatre of cruelty. It's showing the debut play of a British playwright who infamously committed suicide at 28. Maja Kleczewska's directs Sarah Kane's Blasted (1995), where civil war is raging outside a posh hotel room in Leeds, whilst two rapes take place in its stage interior. The setting is far removed from The Persians, who present the enemy fresh from defeating the Greeks. Both plays ask 'what is the war?' and put a human face on catastrophe. Gotscheff's version of the latter presents the Persian protagonists as children. The act of war is reduced to being a game, making the reality of its mortal victims all the more poignant.

Kleczewska points out the fear of ‘being blasted’ that Kane presents has become an everyday experience of European and American citizens. Iraq's Abu Ghraib prison where both Iraqis and dissidents have been tortured is a perfect example of the ‘incomprehensible cruelty’ of Kane's drama. Her adaptation of the five act play shows how the issues have 'become the undeniable, a direct threat for our humanity.'