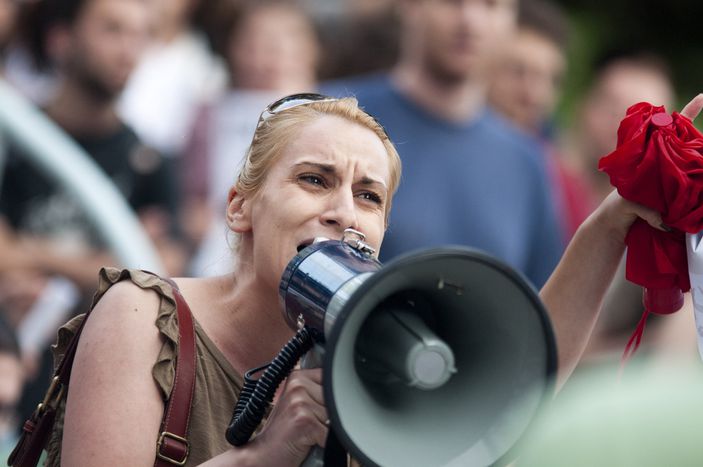 Greek tragedy of a Macedonian tragedy: the story of #Martin in five acts

On 5 June 2011 21-year-old Martin Neskovki was killed at the hands of Igor Spasov, bodyguard to the Macedonian prime minister. Two months on from demonstrations attended by thousands outraged by the government’s inaction, a handful of remaining protesters present their own conclusion to the investigation – onstage and online

The chorus of activists against police violence, aged twenty to thirty years old, is seated on the stone spiral staircases, behind the memorial to Mother Theresa, who was born here in Skopje. The July afternoon is hot and the atmosphere is relaxed as we wait for the performance rehearsal to begin. It is hard to ignore the four police officers in reflective vests standing nearby. ‘They come and go at the same time as we do,’ explains Vangel Beshevski, a freelance journalist and director of the publishing house Slovo, who is also a member of the chorus. 'But the policemen in civilian clothes are seated in front of the memorial…'

‘All the world a stage?’ Miroslav Petkovik interrupts the conversation in a firm tone. The theatre student is adapting and directing a production of Antigone adjusted to ‘the vision of Macedonian society’. Both in the classical Greek play and in reality, the young people have just one plea: ‘an end to the ignorance of those in power when faced with the voice of the citizens,’ says Vasko, a programme information technician who is about twenty years old, also part of the chorus. ‘We are calling for the interior minister Gordana Jankulovska to step down, as well as the ministry spokesperson Ivo Kotevski, who denied the fact that the murder had taken place.’ The outdoor performance runs from 18 July in Skopje, whose town centre has become the stage for a contemporary production of the Greek tragedy Antigone.

The episodes (the scenic action)

Rewind to 5 June 2011. Martin crosses the town’s central square. Behind him is Igor Spasov. Martin stumbles on the cables - the city is constantly under construction - and the man in pursuit catches him before beating him on the face and kicking him. He only stops when Martin stops moving. He tries to wake him up. He drags him over to a bench at the side of the square. He throws water over him. Two policemen in uniform approach. They talk, touch the corpse. Finally, they chuck him on the ground and call the emergency services. The doctor arrives and cries out: ‘He’s already dead! This isn't the first time this is has happened. You can’t keep doing this!’ When the fire services have left, the policeman approaches one of the witnesses. ‘You saw everything. Tell us what happened!’ ‘I didn’t see anything,’ the boy lowers his head and turns to the side. He wants to disappear. One month on from the tragedy, he confesses to me, ‘I was scared. They threw him off that bench like rubbish.’ He wishes to remain anonymous. 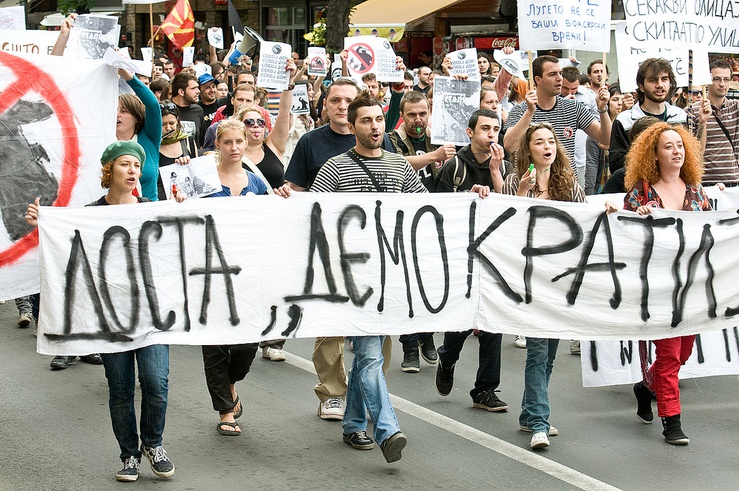 Climax of the tragedy: Martin was murdered on Skopje's central square on the evening that the ruling conservative party VMRO-DPMNE was re-elected. Martin was a great supporter of this party, from which the prime minister Nikola Gruevski had emerged. Igor Spasov, Gruevski’s bodyguard, wasn’t interested in the boy’s political identity though. Few Macedonians are. During evenings spent in Skopje’s Albanian neighbourhood Çarshia, people tell me, ‘the boy was on drugs, wasn’t he?’

The stasimon (the chorus’ chant)

'The mainstream media are very influenced by politics and the majority of them are pro-government. I heard about the murder via twitter,’ says Dejan Velkovski, an independent blogger whose posts are the principle source of information for the foreign media. A cup of iced coffee in hand, I am with George Krstevski from the alternative magazine OKNO, one of the few medias to have published an article about Martin’s tragedy. As a result, OKNO has been accused of spying for foreign countries. ‘It is impossible to be apolitical here,’ George explains. Both he and Dejan describe these protests as the first citizen initiative in years. They also agree that the fact that the demonstrations were organised via social networks show that the initiative is independent. 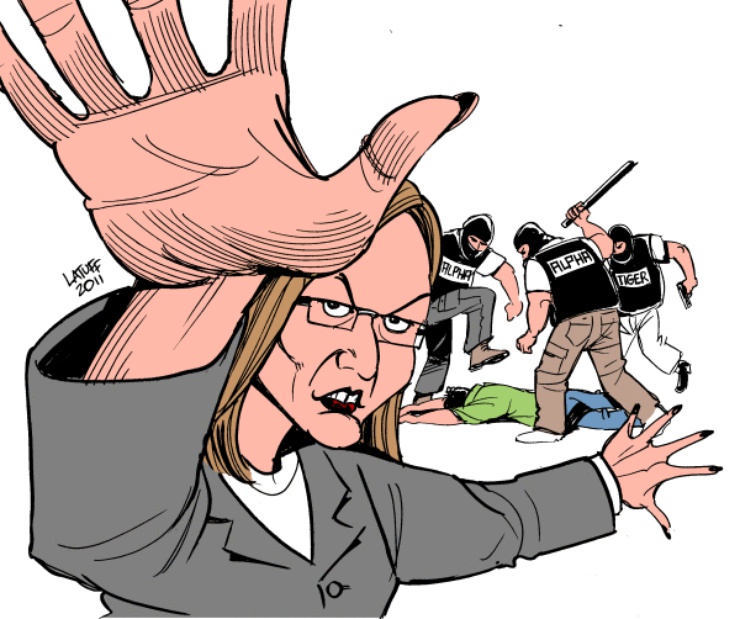 Even for the activists it is difficult to avoid being branded politically though. ‘A group of strangers joined the demonstration,’ George tells me. ‘One particular blonde absolutely wanted to talk to the media in the name of the protestors. A little while later, we found out that she was promoting the VMRO-DPMNE party’s electoral campaign,’ he adds, referring to the elections in June. According to Dejan, the omnipresence of politics is something inherited from the country’s communist past. He isn’t afraid of being labelled however: ‘For five years I have been blogging about everything that bothers me. If you don’t say anything and don’t express your opinion you are no more than an animal.’

The Kommos (song of lament)

‘Martin would have been twenty-two years old on 16 August,’ his older brother Aleksander Meskoski emphasises. I recognise Aleksander even before he is introduced to me. He immediately stands out from the passersby on the high street due to his extraordinary calm. ‘I wasn’t with him that night. My baby girl was born the same day.’ Having heard about the birth of his niece, Martin had an extra reason to celebrate. ‘It sounds like he was really happy. He hugged the party members. He even wanted to hug the prime minister.’

Did Igor, member of the special unit 'Tigers' created during the Yugoslav wars (1991-2001 – ed), instinctively throw himself onto a potential aggressor without thinking? ‘A few years earlier Martin had testified in a case concerning police brutality against a certain man. Last year the same victim was beaten up once more. So Martin had to be called by the courts once again. And it was then that the policeman Igor Spasov started coming to see Martin.’ Aleksander stubs out his cigarette. ‘My brother was killed by a man who a few moments before had been standing at the side of the prime minister,' he continues in a stoic tone. 'I’m calling for a life sentence for Igor. The government isn’t entirely innocent in this case either. They ought to be on the side of citizens, not against them.’ 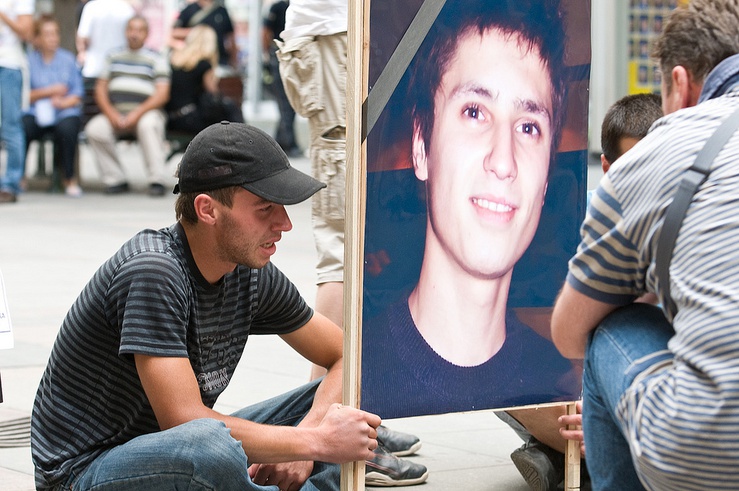 ‘There are two kings in our tragedy. The political scene is divided in Macedonia,’ Miroslav, the director of the Macedonian version of Antigone, explains to me on the first day of my stay. His serious gaze, with clear eyes behind bushy eyebrows and a three-day beard, gives him the look of an ancient Roman. He pulls on his cigarette. ‘Our kings are mute.’ Their silence is the primordial drama of Antigone. ‘Antigone is a source of inspiration for people who want to be heard by the monarchs. That doesn’t mean they want to dethrone them. Society in Macedonia wants to improve the system but political revolutions are associated with extremes such as communism and fascism. It’s because of this that at the end of the tragedy the kings listen to the people and the entire chorus mounts the throne together.’ In Skopje, the drama continues.